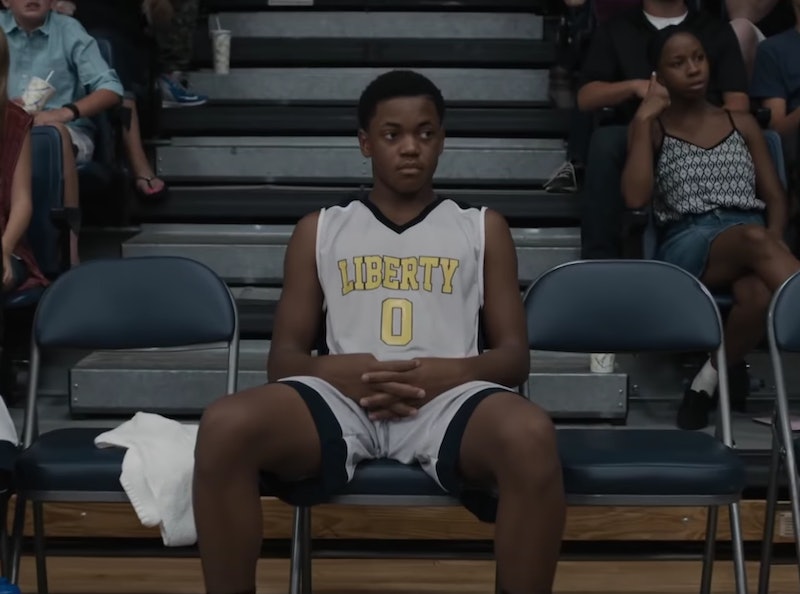 Netflix’s new original movie, Amateur, tells the story of an eighth grade basketball prodigy (Michael Rainey Jr.) who learns about the dark side of the sports industry. The film portrays the tale in a very realistic way, but surprisingly, Amateur is not based on a true story. Instead, it's based on a experiences that too many young athletes encounter.

In Amateur, streaming April 6, 14-year-old Terron is recognized for his talents on the court after a video of him playing basketball goes viral. He's offered the opportunity to attend Liberty Prep, a prestigious prep school, with a full-ride scholarship by Coach Gaines (Josh Charles). This sounds promising at first, but Terron quickly realizes it’s not as great as he was promised it’d be, as he navigates balancing schoolwork with basketball, as well as becoming a prospect of the National Collegiate Athletic Association (NCAA). Terron’s parents quickly notice that he is being taken advantage of, questioning whether this path is the right one for him. It escalates into a battle of power between Terron’s parents and Coach Gaines.

Like seen in Amateur, promising young athletes are often lured by the NCAA with the offer of scholarships to prestigious schools and the opportunity to potentially live out their dreams of joining the NBA. Some basketball players do make it to the NBA and make millions, but of course, this is not the reality for all. And to make matters worse, high school and college players do not get paid, but in some cases, are exploited for their talents. It's no coincindence that Amateur arrives to Netflix in the midst of March Madness, with basketball college players dedicating all their time and energy into winning games watched by millions, with no monetary compensation.

These players do get a free college tuition, but when most of their time is spent on the court instead of the classroom, do they really get to benefit from that? This is what that filmmaker Ryan Koo set out to question when he began working on the film back in 2011. In his Kickstarter campaign, the director pointed out that while there have been many films about athletes being recruited, none address the NCAA lowering the age limit of prospects to seventh graders. “It's a fascinating and treacherous world which often leaves big decisions in the hands of little kids,” wrote Koo.

Prior to Amateur, Koo made a short film of the same name that serves as a prequel to the feature. In the short, a young basketball player named Anton is visited by a coach who tries to recruit him for a prestigious prep school, luring him with free sponsored athletic wear. The coach promises Anton a full scholarship, a job for his dad near the school, a new home, and even a phone. He even gives Anton $300 in cash to pay off his landlord. The coach believes he finally convinced Anton to drop everything to join his prep school team, but this is shattered as soon as Anton’s mom goes to pick him up at school, with Anton remarking, “I won,” as he sits in the car and scrolls through his smartphone.

Watching the short film, it’s eerie to see the extent that some coaches will go to attempt to persuade young athletes, especially those who do not have the financial means to pay for private education, into leaving everything behind to join their team. Anton proves to be wise and wary, but this is not the reality for many athletes. In Amateur, Koo explores what happens when young players do fall for these tactics, and then have to then deal with the devastating consequences.

More like this
The 'Spiderhead' Movie Ending Is Nothing Like The Short Story It’s Based On
By Morgan Leigh Davies
What’s New On Netflix: 'Stranger Things' & 'Mean Girls'
By Arya Roshanian
What’s New On Netflix: The Return Of 'The Umbrella Academy'
By Arya Roshanian
Here’s Everything Coming To & Leaving Netflix In July
By Grace Wehniainen
Get Even More From Bustle — Sign Up For The Newsletter