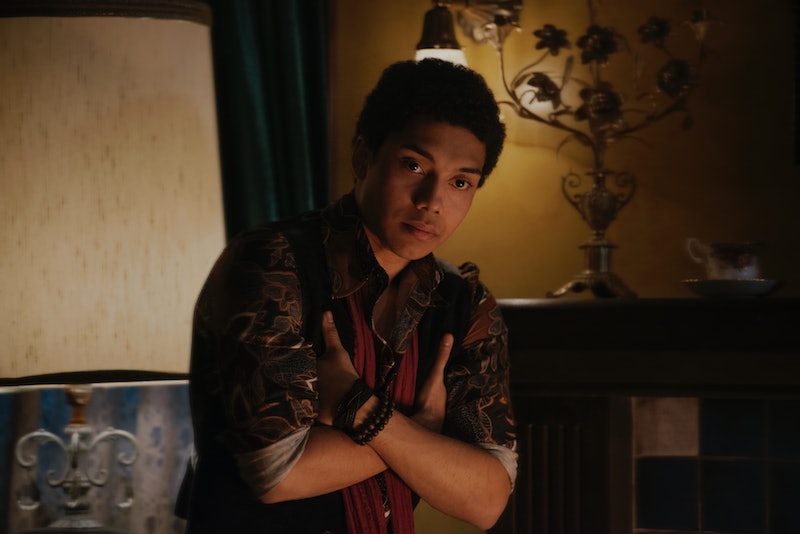 It doesn't take a crystal ball to tell you that The Chilling Adventures of Sabrina is not a remake of the Melissa Joan Hart series, despite the basic premise and the relationship between Sabrina and her aunts Hilda and Zelda. The spooky new Netflix show is an adaptation of the 2014 comics of the same name, written by Roberto Aguirre-Sacasa — who also created Riverdale and this new series. That said, while Cousin Ambrose is in the Chilling Adventures comics and other Archie comic stories about the Spellmans, he might remind you more of a character from the original series — Salem.

Yes, Salem the cat is in Chilling Adventures of Sabrina on Netflix, but he doesn't talk, and it isn't initially clear whether or not he's actually a warlock who has been sentenced to a feline life (as was the '90s version of the character). Instead, Sabrina's English cousin Ambrose fills the role of the sarcastic ex-convict, doling out questionable advice to Sabrina as she navigates the mortal and magic worlds.

According to a casting report for the series:

Ambrose is Sabrina's cousin and a necromancer. He is witty, puckish, pan-sexual — and loves being a witch. Trapped in the funeral home due to a binding spell, Ambrose lives in the mortuary's attic and acts as one of Sabrina's partners in crime.

In the comics, Ambrose Spellman in Chilling Adventures is pretty similar to what he's like on the Netflix series, at least as far as the basics go. Recently expelled, Ambrose comes to live with the Spellmans in Issue No. 1. According to Hilda and Zelda, he's from the "Old Country," and Sabrina thinks his accent sounds like Ringo Starr. Ambrose also has pets/familiars: two cobra snakes by the names of Nag and Nagaina. When Ambrose and Sabrina first meet, he tells her that he lives for drama.

While Ambrose doesn't appear in the '90s live action Sabrina, The Teenage Witch or Sabrina: The Animated Series, this is not the character's first appearance in the Archie universe. In older comics, Ambrose is a fashionable showman in the Spellman family and an adult, not a peer, to Sabrina. Recently, Ambrose was imagined as a witch in training in the short-lived Sabrina: Secrets of a Teenage Witch and was voiced by actor Andrew Francis.

Cousin Ambrose was also a character in the peppy '70s animated series Sabrina, The Teenage Witch. This is the showman-esque Ambrose. He's got a jazzy way of talking, and he owns a magic shop! In short, he's not much like the Ambrose you'll see in Chilling Adventures.

On the Netflix show, Ambrose's role is larger than it is in the comics. He's not just there to assist the aunts with the funeral home and serve Sabrina's storyline. Ambrose has his own desires and goals. Plus, he may be confined to the house, but he's not exempt from the drama. And based on what Ambrose is like in pretty much every iteration of the character so far, that's exactly how he likes it.