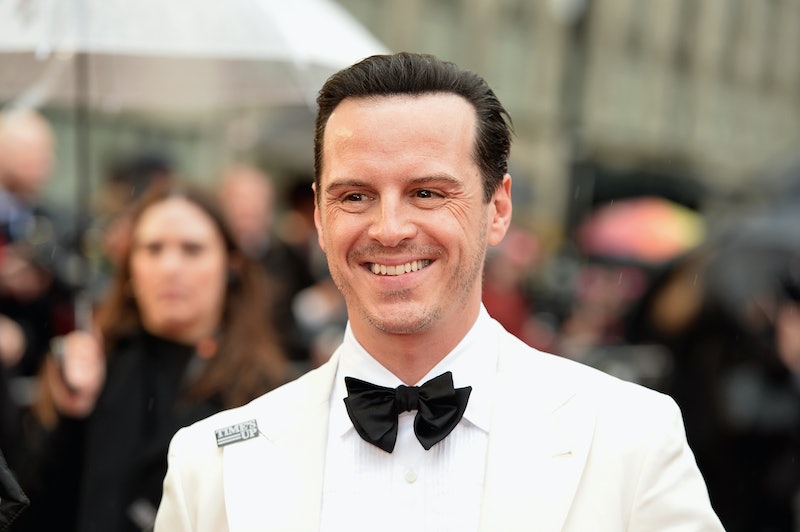 If you watched Fleabag Series 2 you almost certainly fell for Andrew Scott. His character, the thirst-trapping priest, went viral for being heavenly in the very non-biblical sense of the word. Before joining the cast of Fleabag, Scott starred opposite Benedict Cumberbatch in Sherlock as the infamous antagonist Jim Moriarty and as the cruel Dr Addison Bennett in Alice Through The Looking Glass. Pretty impressive if you ask me, and that's just two roles. Following his performance as the (sexy) priest on Fleabag you wouldn't be alone in wondering is Andrew Scott married?

Scott tends to keep hush hush about who he's dating, however he's spoken about his sexuality on more than one occasion. In an interview with the Independent, he said "mercifully, these days people don't see being gay as a character flaw. But nor is it a virtue, like kindness. Or a talent, like playing the banjo. It's just a fact. Of course, it's part of my make-up, but I don't want to trade on it." And, back in 2015, Scott backed the equal marriage bill in his native Ireland but, in interview with Red magazine, made it clear he felt he'd be unlikely to get married himself.

So while marriage might seem off the cards for Scott, in an interview with The Times in June 2019, Louis Wise writes that Scott, "was for a long time in a relationship with the writer Stephen Beresford," which suggests that the pair are no longer a couple. During his relationship with Beresford, Scott said to Red of getting married, “it’s just an option. But it’s about having the same options as everyone else. So now a gay person has a right not to get married.”

He also spoke about the success of the equal marriage bill in Ireland, saying "people came out in droves, from all different backgrounds, to vote for love, and that’s essentially what it is. It also meant that the idea of being gay or bisexual was discussed by families all over Ireland." He continued, “bringing it out in the open like that, and for it to have a result like that, means that it has changed something in the genetic make-up of the country. I don’t think that the full depth of what has been achieved there has even unfolded yet.” I'm telling you, this man is an icon.

At the start of Series 2, Fleabag's sister Claire says, "the priest is quite hot" and truer words have never been spoken. Scott shared his thoughts on his Fleabag sex symbol status in an interview with The Guardian, describing it as "unchartered territory". Phoebe Waller-Bridge, the show's creator and star, said she cast him as the priest because “it couldn’t have been anyone else, It wasn’t an easy ask — someone who could convince as a person who’s seemingly totally at peace, but at the same time has a promise of danger." She continued, "he had to be played by an actor who you can’t define. Andrew has the charisma of 10 people rolled into one.” I couldn't agree more. Scott seems to have made the jump from Bond and Sherlock villain to sex symbol pretty seamlessly. More of him on our screens, please.

This article was originally published on April 1, 2019