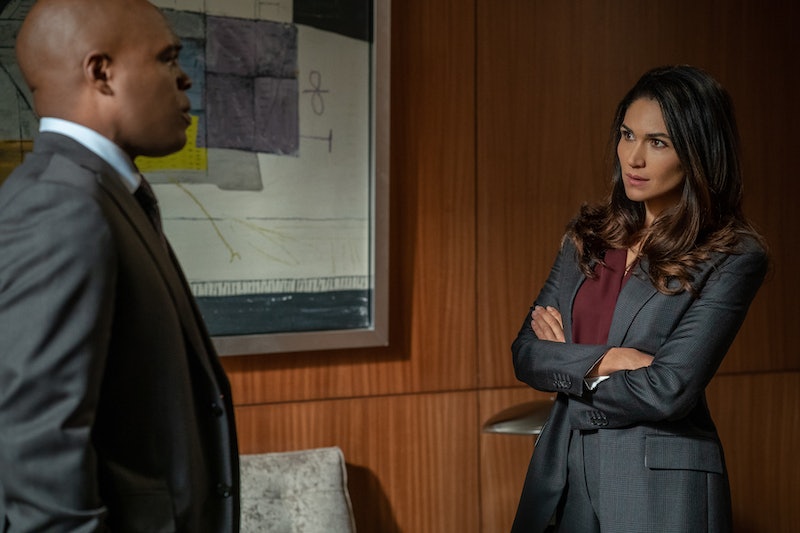 Power Season 5 ended in a massive cliffhanger that left Jamie "Ghost" St. Patrick cradling Lela Loren's Angela in a pool of her own blood after she blocked a bullet that was meant for her lover. Fans were sure her time was up after she was shot point-blank in the chest, but according to showrunner Courtney A. Kemp, Angela isn't dead yet in Power Season 6 might not be so simple.

"You definitely didn’t see Angela die," she told Hollywood Life days before the Season 6 premiere during the Television Critics Association summer press tour. Lela and Ghost were mid-kiss when she looked up to see Tommy, Ghost's former friend and partner-in-crime, pointing a gun at Ghost's back. Without thinking, she moved him out of harm's way and instantly became the target.

In reality, Tommy wants both of them to die — Ghost and Angela, but in that moment, he was aiming the gun at Ghost. "Whether Angela lives or dies, the truth is Tommy was aiming at Ghost," Kemp told Hollywood Life. "So how does that relationship continue?" Or does it?

According to Kemp, the final 15 episodes will expose a "whole world of vulnerabilities." She also confirmed that Angela's fate will be revealed almost immediately at the start of the season. In a separate interview with TVLine, she made a similar claim. "Lela is in Season 6," she said. "But I can’t say what she’s doing." And she left it at that.

So what is Angela doing? Is she wounded, barely hanging onto life throughout the entire season? Does she continue to try and protect Ghost from Tommy's wrath? Or is it too late for that? Before she was shot, she asked Ghost, straight up, if he had killed Terry Silver, who disappeared earlier in the episode. Ghost lied and denied it.

"That’s going to be something that he has to struggle with because he made that decision to lie. The essence of the show has always been the very 12-step idea that you’re powerless, we’re powerless. We don’t have power," Kemp told TVLine. "In order to keep the relationship, he lied. And then he’s faced with the situation moments later where he may not have been able to keep her at all, and that the last thing that he says out of his mouth is a lie. If I’m facing that, how much would I want to have those moments back, to tell the truth?"

Or will Angela even survive to hear the truth? She may have lived to see the Season 6 premiere, but there's a chance she won't live much longer. Kemp told Hollywood Life to expect some big deaths to end the series. "So Episode 8 [is] big. Big death. Episode 10, bigger death," she said. "We’re off the air for 8 weeks, and then Episodes 611 through 615, each one of them is a big, explosive episode. So there are just multiple explosions at the end of this series." Angela could be one of them.

More like this
Megan Thee Stallion Actually Auditioned To Be This 'P-Valley' Main Character
By Radhika Menon
Does 'Locke & Key’s Ending Mean There Could Be A Season 4?
By Sophia Moore
'The Capture' Is Finally Back – & S2 Looks Tense AF
By Sophie McEvoy and El Hunt
A 'Lord Of The Rings' Star "Will Challenge Misty" In 'Yellowjackets' Season 2
By Gretchen Smail
Get Even More From Bustle — Sign Up For The Newsletter