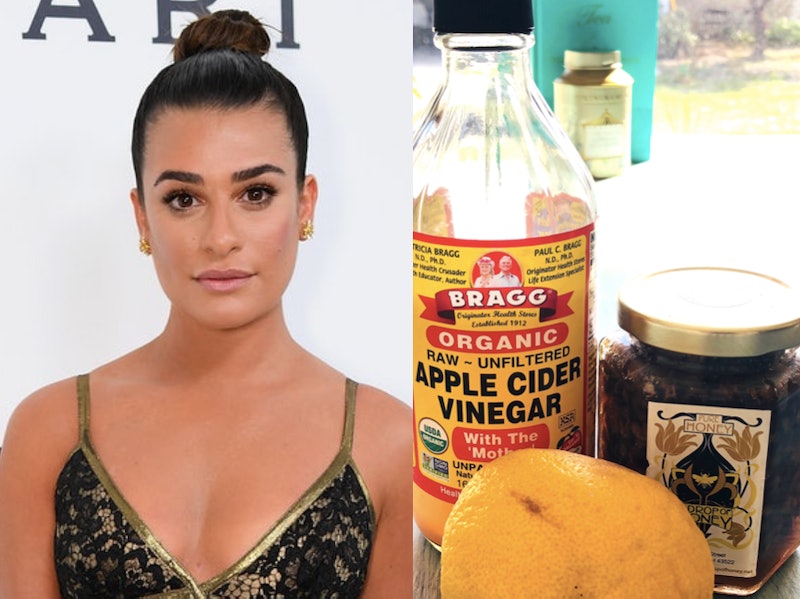 If the flu has taken you down, you'll likely try anything to feel better fast. While I don't recommend going as far as sleeping with onions in your socks (yes, this is a thing), you might be wondering if apple cider vinegar is helpful for the flu. Turns out, Lea Michele has your back. According to People, the Glee star posted her go-to natural flu remedy to her Instagram Stories, and you can probably make it in two seconds. If you've tried everything else, you've really got nothing to lose by mixing up this all-natch flu drink, which actually contains ingredients that experts agree are immune-system boosters.

Since January seemed to last eleventy million years, it's only fitting that a lot of people ended the world's longest month by catching the dreaded flu, and not even Hollywood's elite are immune. In this case, celebrities really are just like us. On Thursday, Feb. 1, Michele posted a series of Instagram stories about coming down with the flu. But, because she knows that you're also buried in a pile of tissues while furiously googling DIY flu remedies, Michele posted two feel-better-fast-flu recipes. Of course, if you're really worried about getting the flu, it's not too late to get your flu shot, which can make the illness a little milder if you do contract it, even though doctors say it's less effective than usual this year.

The first one is a drink that you might have to plug your nose to get down if you don't like vinegar. In an Insta Story that has since expired, Michele recommended mixing up a super easy cocktail of honey, lemon, ginger, and apple cider vinegar. If you're really congested, you might not be able to taste or smell it, which can be a good thing. Because it's really not for everyone.

People magazine reported that Michele has been hitting the apple cider vinegar cocktail hard. "So currently this is my life. I drank more of this than I’d like to admit," Michele is quoted as saying on her now-expired Instagram story. If you're not used to drinking vinegar, maybe you should play it safe and start with one vinegar drink. Once you throwback your flu-be-gone cocktail, Michele recommends a healing soup to reward yourself for getting that vinegar down like a boss.

"My healing soup. Just a simple garlic broth with kale and mushroom," she wrote on Instagram stories. "So good for fatigue and [it's also] a flu buster!" This is a flu buster I can get behind. I've long been a proponent of using garlic and lemon when I start to feel the ickies descend. And, I'm not alone. HealthLine reported that garlic has immune-system boosting properties, and Livestrong noted that lemons are known for their antiviral and antibacterial properties.

Dr. Mercola detailed on his blog that mushrooms also have secret flu-fighting superpowers. Plus, pretty much everyone knows that kale has been promoted from garnish to superfood over the past decade. You likely already have most of these items at home, but if you don't, that's what food delivery apps are for. Seriously, some of them will even go grocery shopping for you. While being stuck at home with the flu with nothing but soup, vinegar, and Netflix can be pretty isolating, other flu-ridden folks are claiming solidarity with Michele, who really is just like us.

Except for one thing. I have never looked this red-carpet ready when I have the flu, or on any other day of my life. In fact, when I have the flu I look like I've been reincarnated as a dishrag. Perhaps Michele's flu remedy can make you look amazing too (if you try this please report back with your results because inquiring minds want to know).

The flu is a beast this year, so even if you're not sick you might want to try these immune-system boosting recipes preemptively to make sure you stay healthy. With all the germs going around, and new studies revealing that the flu can be spread by a sick person just breathing on you, the best offense against the flu is a good defense. Let's all toast our apple cider vinegar cocktails to health and wellness because, nobody has time for the freakin' flu.