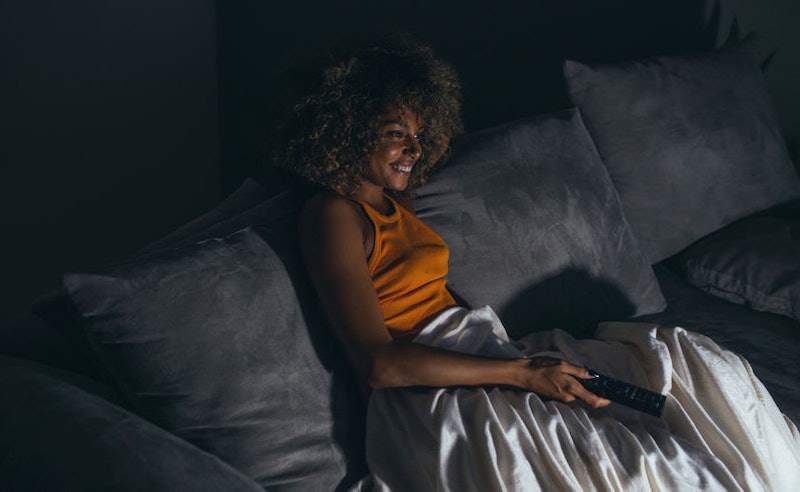 The night owls among you are probably already aware of some downsides to your preferred sleep schedule: most notably, the standard 9-to-5 becomes a bit more painful when you didn't go to sleep until 3. But that isn't where the problems end. Ever wondered if being a night owl is bad for you, beyond the added caffeine consumption it takes to get through the work week? According to a new review of studies, your sleeping habits could have a very real impact on your health, by increasing your risk of conditions like heart disease and type 2 diabetes. Anyone else suddenly planning an early night?

According to researchers from Northumbria University, most of us have a "natural preference" towards staying up to the small hours or rising with the sun. It's determined by your circadian rhythm, otherwise known as a chronotype — that's the body clock that influences when you sleep, when you wake up, and when you eat, alongside other functions. Night owls have the evening chronotype, or an inbuilt preference for staying up late.

Here's the issue: your chronotype tends to have a major impact on when — and what — you eat. The researchers' review of existing studies, published in Advances in Nutrition, found that people with the evening chronotype were 2.5 times more likely to have type 2 diabetes than those with the morning chronotype. That could be down to when night owls tend to eat.

"Glucose levels should naturally decline throughout the day and reach their lowest point at night," the review explains. But people with an evening preference typically eat later, often right before going to bed. The result? Their glucose levels increase when they're supposed to be at their lowest. "This could negatively affect metabolism as their body isn't following its normal biological process," the researchers suggest.

And then there's the issue of what, exactly, night owls are more likely to eat. People with an evening preference tend to consume more sugary foods, fast food, alcohol, and caffeinated drinks than those with a morning preference, according to the review. Early risers eat more fruit, vegetables, grains, and rye. Night owls often have "erratic eating patterns," skipping breakfast and eating larger — but fewer — meals.

The researchers posit that these eating habits could explain night owls' increased risk of chronic disease: most notably, heart disease and type 2 diabetes.

But if your evening preference is naturally determined, does that mean you're fated to stay up all night for the rest of your life, maintaining all the eating habits associated with night owls? Not necessarily, the study suggests. Interestingly, your chronotype changes as you age.