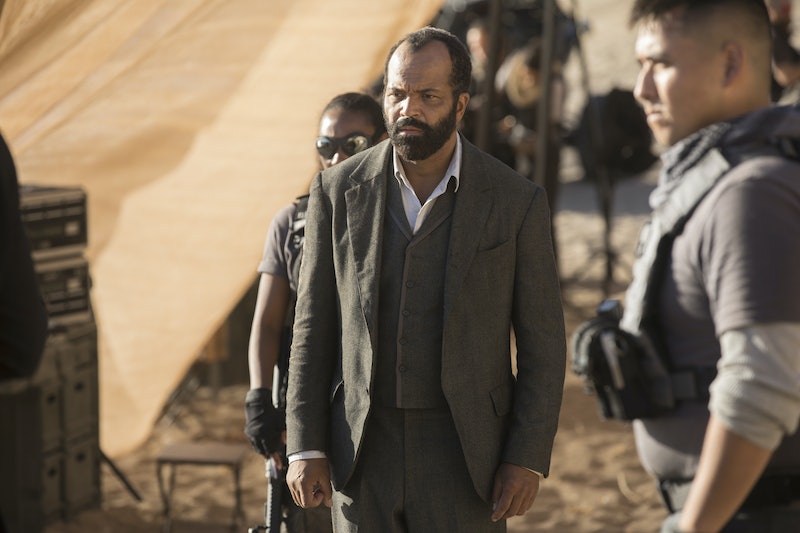 Westworld is a strain on the brain the second a player piano starts with a classic rock tune you can't quite recognize. Throw fan theories into the mix and the head-scratching really gets going. One new theory, that Bernard is actually Teddy on Westworld, is twisted-logic and conspiracy fandom at its very best.

Something is definitely up with Bernard in Season 2. There is no doubt whatsoever about that. One clue is the major discrepancy between the Bernard that Stubbs finds on the beach and the Bernard traveling with Charlotte two weeks prior — the scar on his forehead from where Ford made him shoot himself. It's not there in the present, and there are several fan theories trying to figure out what exactly is up with that little detail. Are there multiple Bernards running around Westworld? Or is Bernard someone else? Unless it "healed" super quickly, the scar a key mystery.

Is the new Bernard somehow Teddy as well? The theory comes from reddit user subvrsteve and others in the thread — and fans on reddit did crack that big Man in Black/William twist from Season 1. Never underestimate the power of a fandom thinktank when it comes to fictional mysteries.

For one thing, Bernard is dressed remarkably like Teddy in the present timeline. Granted, he may have just donned Western attire to fit in with the other hosts, like Charlotte and Lee Sizemore. In the first episode back, Bernard says "I killed them all" — and then the camera points directly to Teddy's body floating in the water. Could that be a clue as well?

Then there's the Season 2 primer video — which was a Rick Roll, be warned before you click. However, before the Ricks started rolling there's a bit of Westworld footage that fans have already seen on the series thus far, as well as a curious sequence in which Bernard arrives at Sweetwater and seemingly starts on Teddy's loop. He gazes out of the train window, and spots Dolores first as he enters the town. While it seems like a setup for the incoming joke, they couldn't possibly have filmed all that footage just for a gag.

Of course, this could be a dream in which Bernard images that he is Teddy — on a loop like all of the other hosts, not Ford's partner programmed to believe he is human. Part of his own existential crisis and all that. However, dreams are a bit of a touchy subject in Westworld. Isn't that what hosts are told to call reality?

Ford has noted twice on the show that Arnold/Bernard and Dolores have a special relationship. "I thought it best to keep you separated," Ford told Dolores when introducing her to the Bernard host in a Season 1 finale flashback. "You've always had an odd effect on one another." In Season 2, a young Ford accuses Arnold of favoritism with Dolores. How does this connect to the B=T theory? Teddy is emotionally programmed to protect and love Dolores, and has often massacred hosts — like Bernard claims to have done — in her name. Perhaps that connection they share is important.

The Ringer brings Wyatt into the mix with this theory, calling to mind a particular moment in Season 1, Episode 3. It's the first time Wyatt is mentioned, before fans know that the character has been merged with Dolores. “The way I heard it," a host said, "Wyatt is a mercenary. Forces his men to wear the flesh and bone of their enemies.” Teddy dismisses this as being just a mask, and it could mean that they're cannibals — but the phrasing could be an old-timey metaphor for transferring a host's mind into another host's body. Maybe using those little brain eggs that started popping up in Season 2...

Pedestrian actually asked James Marsden about the Bernard/Teddy theory. “So Teddy is one version of three Bernards," Marsden said in the interview. “That’s out online right now? I’ve not heard that.” He insisted that he had genuinely no idea what happens — which may very well be true — and did call the theory "interesting."

Does this check out for you? Could someone have plopped Teddy into Bernard? It would explain why, in the present, he is so confused by everyone around him, Charlotte Hale in particular. Teddy's default state seems to be confusion, after all, and a twist like this could account for some of it.