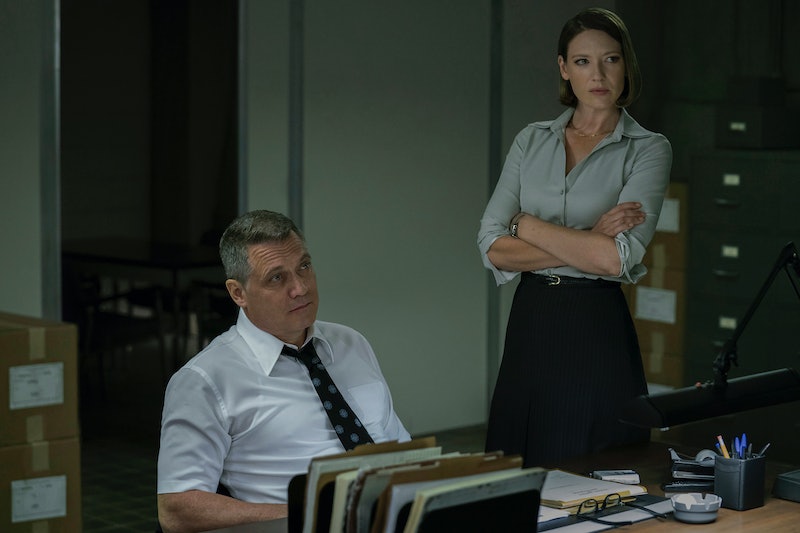 If you're an avid true crime fan, the term "serial killer" is just one of many examples of the kind of law enforcement jargon that you can speak fluently. In fact, serial killers are discussed so frequently in today's media lanscape that it seems as though the term has been around forever. But this classification for certain types of murderers is actually a pretty recent invention, and the new Netflix series Mindhunter tells a fictionalized version of the story of the two men who coined the term. In the series, these men are FBI investigators Holden Ford and Bill Tench. Viewers should know that Holden Ford is based on FBI agent John E. Douglas. But is Bill Tench a real person too?

Tench is a fictional stand-in for the other half of the pair of visionary FBI criminal profilers that began the trend of using psychology to elucidate the motives and behaviors of serial killers. The real life Tench is Robert Ressler, an agent who worked closely with John E. Douglas throughout his career at the FBI. Ressler also invented the term "serial killer," according to Psychology Today. The new series may star fictional characters, but the story is really an adaptation of the book Mindhunter: Inside The FBI's Elite Serial Crime Unit, written by Douglas and Mark Olshaker. The book details the experiences of Douglas and Ressler as they began their work interviewing serial killers.

According to NPR, Ressler and Douglas became the first people to sit down and interview serial killers with the explicit goal of psychoanalysis for criminal profiling. The pair interviewed notorious murderers such as Ted Bundy and Jeffrey Dahmer, conversations that will also be fictionalized in the show. In doing so, Ressler and Douglas developed intimate connections with some of the most dangerous criminals in United States history. NPR reported an anecdote Ressler shared with a documentary team:

Ressler told a documentary team that during one of his interviews with John Wayne Gacy, the killer gifted him with a colorful self-portrait of himself as a clown. On the back was an inscription that read: "Dear Bob Ressler, you cannot hope to enjoy the harvest without first laboring in the fields. Best wishes and good luck. Sincerely, John Wayne Gacy, June 1988." When Ressler asked what Gacy was referring to, his reply was simply: "Well, Mr. Ressler, you're the criminal profiler. You're the FBI. You figure it out."

Douglas and Ressler's work began at a particularly unique time in American criminal history. The 1970s was a decade that saw an unprecedented spike in reported serial killers. A piece in Slate discusses the work of Northeastern criminology professor James Alan Fox. Fox has a database of every known serial killer since 1900, and according to his research, while there were 19 serial murderers reported in the 1960s, there were 119 in the '70s, over six times the amount in the previous decade.

An increased number in reported serial killers doesn't necessarily indicate that there were more of them. As Slate reports:

There are plenty of structural explanations for the rise of reported serial murders through the 1980s. Data collection and record-keeping improved, making it easier to find cases of serial murder. Law enforcement developed more sophisticated methods of investigation, enabling police to identify linkages between cases — especially across states — that they would have otherwise ignored. The media's growing obsession with serial killers in the 1970s and '80s may have created a minor snowball effect, offering a short path to celebrity.

Yet a drastic increase in the number of serial cases being reported would have a profound effect on the public. If 100 more serial killers are discussed in the media than were in the previous decade, it would appear as though the country has a massive serial killer problem. Fear and obsession with serial killers grew throughout the '70s, rendering Douglas and Ressler's work both a response to these fears, as well as a search for a solution. Those "more sophisticated methods of investigation" mentioned in the Slate piece are a direct result of the work done by Ressler and his partner during their time at the FBI.

Ressler passed away in May of 2013 at the age of 76, but he left behind a criminal investigation landscape drastically altered by his work. Every episode of Criminal Minds, and, much more importantly, the public at large, owes a debt to his service, as a criminal profiling unit would likely not even exist if it hadn't been for the pioneering work of the real life mind hunters. And, that's all because Ressler and Douglas decided that speaking to some of the most violent criminals was a worthwhile pursuit.