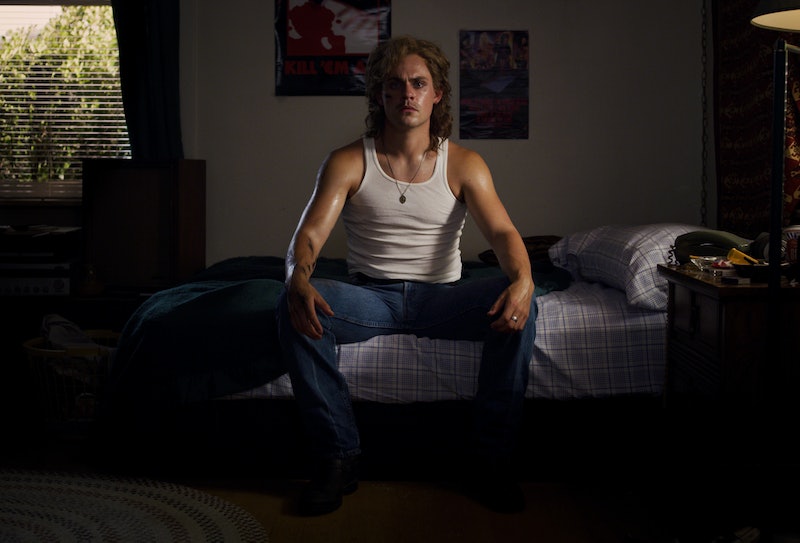 Spoilers ahead for Stranger Things 3. Billy Hargrove (Dacre Montgomery) was trouble from the moment he was introduced in Stranger Things 2, but it wasn't clear how much until Stranger Things 3. Across the season's eight episodes, he transformed from bad boy to full-fledged villain until — ironically — becoming somewhat of a hero. But was his sacrificial ending the last we'll see of him? Is Billy really dead?

Unfortunately, most signs point to yes, which is bittersweet considering Season 3 made him much more sympathetic. In Season 3, Billy was just an antagonistic bully, but Stranger Things 3 gave us a deeper understanding of how he became that way. When Eleven accessed his memories, we were able to see he was once a happy young boy, but after his mother left to escape her abusive marriage, he began acting out violently just like his father. Throughout Season 3, he makes matters worse by recruiting an entire army of possessed people for the Mind Flayer — though of course, this time he didn't have any control over his actions.

Ultimately, Eleven was able to tap into Billy's humanity, causing him to sacrifice himself rather than letting the monster kill her. And in his dying breath, he apologized to Max for everything he'd done. That may almost make you wish he'll be back for Stranger Things 4, but sadly, these clues suggests it's truly the end for Billy.

We Saw Him Get Killed

Perhaps this is too obvious, but it's worth stating for the record. While we never saw Hopper's body — not to mention that end-credits scene — there's nothing suggesting that Billy survived the Mind Flayer's brutal stabbing.

Everyone Who Was Flayed Died

As we learned early on in the season, all of the Flayed die when the Mind Flayer does. Billy was Patient Zero, so even if he hadn't been stabbed through the abdomen, he would have been killed with the rest of the Flayed anyway. As CornholioRex pointed out on Reddit, Billy "ingested too many chemicals, [so] his blood was basically all flayer." And indeed, by the time Billy stood up to the Mindflayer in the Starcourt Mall, his body was hardly human anymore, which is why it's good that they removed the small creature out of El's leg before things got too bad.

He Got His Redemption Story

"[N]o one is just bad," Montgomery told Bustle. "There's always a reason, right? And in this season, the ending is so fantastic in the same way. Billy is humanized and redemption is very evident, and that was a really nice arc for me to go really dark."

But while Billy may have died a hero, he's no Bob Newby. As many fans pointed out on Reddit, saving El didn't cancel out Billy's aggressive, violent, and mean-spirited behavior. It's nice that he was able to redeem himself a bit in the end, but it's fitting to leave things there.

"We constructed [Billy's ending] this way from the beginning," Montgomery told the New York Times when asked how it felt for the role to be over so soon. "I knew coming in that this was going to be the outcome. And I don't think I would have been given the season that Billy had if I wasn't dying — I think because I was on my way out, I was given an amazing opportunity to do a wide array of things. I'm very grateful." Hmm, certainly sounds like he isn't planning on returning to the show.

With all that in mind, it seems like, yes, Billy is really dead. He was a complicated character with plenty of demons (both literal and metaphorical), but at least he went out on a high note.