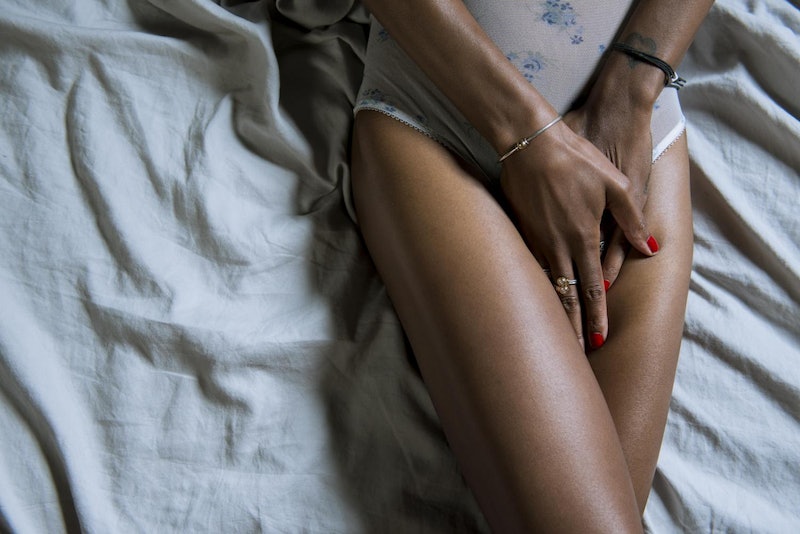 There are so many things to love about having sex: it can be fun, intimate, pleasure-packed, stress-relieving, passionate, silly, and so much more. But in addition to all its wonderful qualities, sex sometimes comes with messy side effects — including bleeding, which, aside from being a pain to clean up, can be pretty scary to experience. I'm positive I'm not the only person who's frantically searched "is bleeding after sex normal?" upon looking down and discovering that my sheets were suddenly blood-stained after sex. But even though it might freak you out in the moment, there is some good news: bleeding during or after sex is relatively normal, and may not necessarily be a cause for concern — though you should always speak with your doctor if you're worried.

According to the National Health Service of the United Kingdom, there are a few possible reasons a woman might experience bleeding after sex, aka "postcoital bleeding." The explanation could be as simple as vaginal dryness —which is caused by reduced vaginal secretions, often after menopause — or damage to the vagina, such as tears caused by childbirth or dryness/friction during sex. So if you notice that you tend to lightly bleed during or after sex, it could just mean that you need to try adding lube to the mix and taking things slow and gently until you find what works for you and prevents you from bleeding.

On the other hand, bleeding after sex can, in some cases, be indicative of other, more serious problems with your sexual health. The NHS of the UK says that bleeding after sex could be a sign of an infection, like pelvic inflammatory disease, or of an STI, like chlamydia. In other instances, postcoital bleeding might be a sign of cervical or endometrial polyps (which are benign or non-cancerous growths in the womb or the lining of the cervix), or of "cervical erosion," when there is an inflamed area on the surface of the cervix. And in rare cases, bleeding after sex is a sign of cervical or vaginal cancer — which is why you should always consult your doctor if you have cause for concern.

How Can You Prevent Bleeding After Sex?

If you're tired of spending money to wash your sheets every time you have sex, figuring out how to prevent bleeding during sex is key — but before you can do that, you have to figure out the cause of the bleeding.

"It is important to find the cause of bleeding before implementing a plan to prevent it," Dr. Neeraj Kohli, a urogynecologist and the co-founder of healthcare tech start-up UBERDOC, tells Bustle. "If it's related to injury or trauma, preventative measures can include lubrication during intercourse, different positions, and trying to dilate or stretch the vagina in between sexual activity. If the bleeding happens on a regular basis and is persistent, consultation with your medical doctor is advised for a more thorough exam and evaluation."

Like with anything health-related, be sure to consult your healthcare provider if you're concerned about how often/much you bleed during sex. Other than that, you can have fun experimenting with your partner to find positions that work better for you (and don't forget to add plenty of lube).

Here's What To Do If You Experience Bleeding After Sex

If you look down and see — gasp — bloody sheets, don't freak. It might mean a little extra clean-up, but it doesn't have to be a total mood-killer — though you should refrain from sexual activity if you experience vaginal pain and bleeding.

"First thing, don't panic," Kohli says. "Refrain from any further sexual activity. See if it's associated with any pain or injury to the area of the vagina. Sometimes pressure and an ice pack can help. Usually, spotting is self-limited. If you have persistent spotting [beyond] 24 hours or it develops into heavy vaginal bleeding, consult your doctor."

At the end of the day, a little blood is not a huge deal: as long as you're careful, take it slow, and talk to your doctor if your bleeding is heavy/frequent, you can continue to have a normal, healthy sex life — just be sure to use barrier protection (because blood from open wounds increases the risk of transmitting/contracting STIs and HIV)... and it might not be a bad idea to always leave a few towels on the nightstand.

More like this
Help! My Partner Only Wants Sex Late At Night & Won’t Compromise
By Sophia Benoit
6 Abortion Advocates To Follow On TikTok
By Sara Youngblood Gregory
What Mercury Retrograde Spring 2022 Means For Your Sign's Sex Life
By Nina Kahn
How To Protect Your Digital Privacy If You Need An Abortion Post Roe v. Wade
By Kaitlyn Wylde
Get Even More From Bustle — Sign Up For The Newsletter