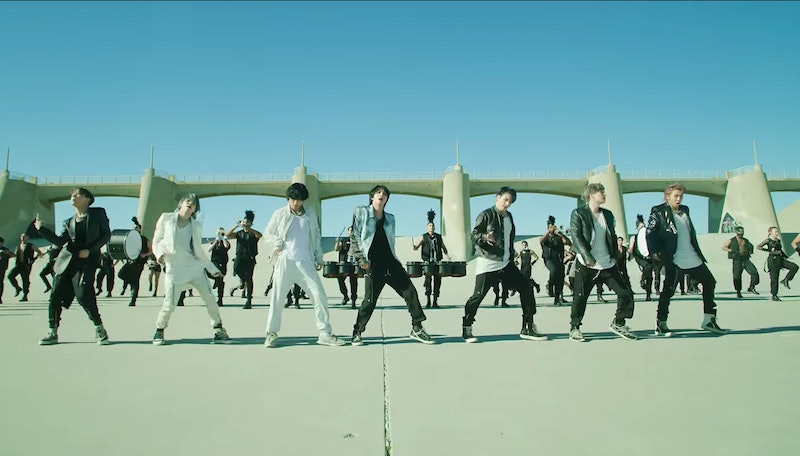 Last August, K-pop sensation BTS announced they would be taking an extended break for an unspecified amount of time following their Love Yourself World Tour that ended in April 2019. However, with their seventh studio album, Map of the Soul: 7, dropping on Feb. 21, we're all desperate to know, will BTS tour the UK in 2020?

Get ready, because the group will be headlining two dates at London’s Twickenham Stadium this July. These are the only two British dates on their Map of the Soul tour, but they have left two dates free in their diary on 13 and 14 June, and no one really knows why. Some are suggesting that, perhaps, if the Twickenham shows sell out quickly, more UK dates could be added, so watch this space.

Alongside the Twickenham shows, BTS has two more European destinations in their itinerary before they head over to Japan in late July. These include two shows at Berlin’s Olympiastadion Berlin on July 11-12, and Barcelona’s Estadi Olimpic Lluis Companys Stadium on July 17-18.

Info on where to get tickets for the band's June and July gigs, along with sell dates and times, are yet to be announced. But we can do a bit of guess work. Tickets became available via Live Nation for the band's U.S. shows on Feb. 7, just under two months before the first North American show in Santa Clara. Running with that logic, tickets here could go on sale sometime in May.

For now, however, there's plenty of time to get familiar with Map of the Soul: 7 before the tour.

More like this
Harry Styles Had A Major Stage Malfunction At The Grammys
By Darshita Goyal
Mimi Webb’s IRL Situationship Inspired “Red Flags”
By Catharina Cheung
Here’s How You Can Watch The Grammys 2023 In The UK
By Emma Madden and Catharina Cheung
All The Ways You Can Watch The Super Bowl In The UK
By Asyia Iftikhar and Darshita Goyal
Get The Very Best Of Bustle/UK
Sign up for Bustle UK's twice-weekly newsletter, featuring the latest must-watch TV, moving personal stories, and expert advice on the hottest viral buys.