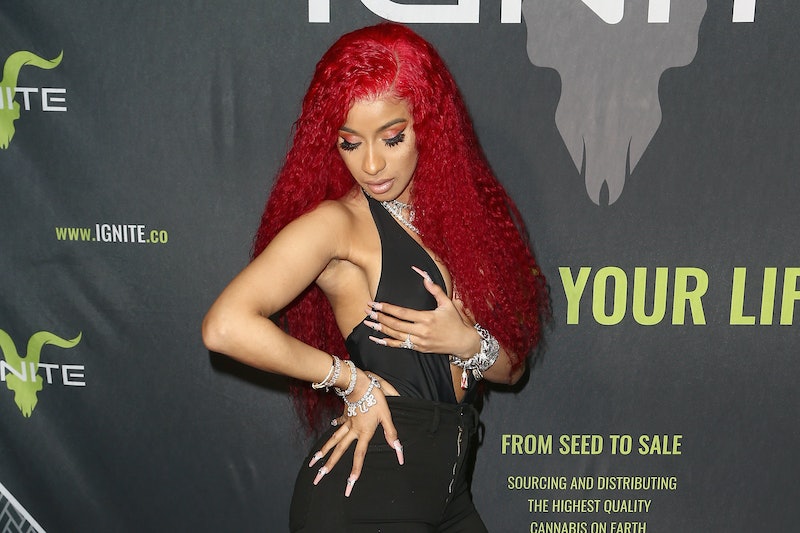 Today’s fashion trends simply mimic fads of the past— and Cardi won't let you forget it. Cardi B’s new lip piercing will make the former scene kids of the 2000s will shriek in tandem. But, somehow, Cardi makes the emo staple (with a twist) look super modern.

The rapper has plenty of reason to do whatever she dang well pleases this week. V-Day took a back seat to her G-Day—Grammy Day, where Cardi took home her first Grammaophone for Best Rap Album. The win also made Cardi the first female solo artist to ever win in said category. Many people wouldn’t have the courage to pierce anything, but Cardi’s win may have given her the push to make such a bold move.

As the new mom was putting positive vibes in the air, she also put two holes into her bottom lip. The rapper stopped by a tattoo shop in L.A. seeking out artist Luis Vega, who posted a selfie of he and Cardi with the new drip on her lip.

"Guess who came in to the shop today so random @iamcardib to get her bottom lip piercing at @cityofangelstattoos,” he wrote. “So blessed I had the privilege to meet her at my shop."

Not only did Cardi bring back the piercing trend of yesteryear, but it only cost her $25 for the service. Aaaoow!

Although this piercing may look painful, Cardi isn't exactly new to needles. If you've ever gotten a glimpse at the rapper's legs (you have), then you've peeped the giant green peacock tat on her upper thigh. It's one tat that you really can't miss, and most couldn't imagine trying to bear the pain. Cardi, however, is a real one.

Since the start of the year, Cardi B has been dropping bombs left and right on her fans, and this peirced look is just the newest one to land and blow Bardi Gang's mind.

Earlier in February of this year, the rapper made waves as the face of the new Pepsi campaign, claiming "okuuur" is the best way to describe the taste of the soda pop. On Sunday night, the rap star made history at the Grammys winning Best Rap Album, and then dropped another track with Bruno Mars called "Please Me", and it's explicitly delicious for a V-day celebration. This has been a really good week for Cardi, so why shouldn't she shoot for doing something bold?

Despite the drastic change, it didn't stick around long enough for anyone to judge. The lip piercing was gone almost as quickly as fans became acquainted with it altogether. This lead some to believe it was a temporary look for a photoshoot or music video. Only time will tell.

Cardi posted a video on her Instagram lip syncing the new song with Mars on the track, and as she mouthed the words, her lips were completely pierce-free. Instead, the rapper donned some casual firetruck red locks and nude lipstick.

Cardi ended her Valentine's Day with a warm tub sprawled with flower petals, and hopefully everyone will take notes from her on how to do V-day for next year. On the other hand, most people may skip the piercing and jump to the bath portion. To each their own.