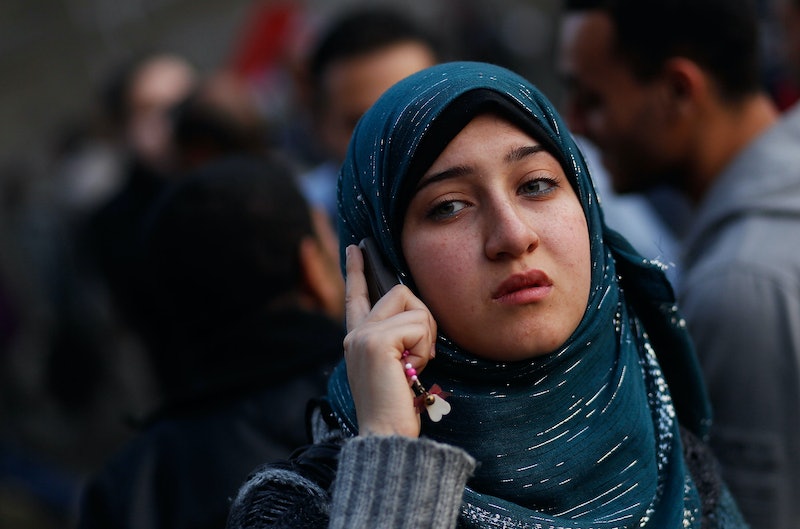 For the approximately 95 percent of Americans who use cell phones regularly, the state of California has a message: Be cautious. While no one is saying you should totally give up on your electronics, California's Department of Public Health (CDPH) has released safety guidelines regarding cellphone radiation for the first time ever. That's because some scientists believe it could have a negative impact on your health.

The scientific community has long disagreed about how dangerous the invisible signals that many electronics emit might be, but following a lawsuit by a University of California professor, CDPH officials have published a document detailing ways to mitigate exposure. "Although the science is still evolving, there are concerns among some public health professionals and members of the public regarding long-term, high use exposure to the energy emitted by cell phones," said CDPH Director and State Public Health Officer Dr. Karen Smith in a statement.

"We know that simple steps, such as not keeping your phone in your pocket and moving it away from your bed at night, can help reduce exposure for both children and adults," Smith said. Some of California's new guidelines for cell phone usage are:

Of particular concern for the CDPH are children and teens, who might be at higher risk from adverse effects from RF energy. According to the CDPH document, RF energy can reach a larger part of young people's brains, and any effects of RF energy might last longer when a child or teen is affected. "There is not a lot of research about the effects of cell phone RF energy on children or teenagers, but a few studies have shown that there maybe hearing loss or ringing in the ears, headaches, and decreased general well-being," officials wrote in their guidelines.

"Children's brains develop through the teenage years and may be more affected by cell phone use," Smith said. "Parents should consider reducing the time their children use cell phones and encourage them to turn the devices off at night."

The public health group further recommends that Californians avoid sleeping in close proximity to their cell phones. If they must be close to their devices, they suggest keeping them in airplane mode, which disables RF energy from being omitted or received. And while the CDPH suggests using headsets when taking calls, even those might emit RF energy, so officials suggest taking them out when they aren't in use.

In 2014, University of California professor Joel Moskowitz said he learned that state cell phone safety guidance might be in the works, and filed a public records request for the document. The CDPH refused to give it to him, so in 2016 he decided to sue.

"I felt the document belongs in the hands of the public," Moskowitz told local NBC affiliate KCRA. "I couldn’t understand, and in fact the informants couldn’t explain, why the document was suppressed." Earlier this year, a judge ruled in his favor and required the CDPH release its guidelines.

In part, the state of California argued against the document's release because "the public may learn whether cell phones pose a risk to their health by consulting any number of other public websites," like the Centers for Disease Control and Prevention or the World Health Organization. They also argued that the document could "needlessly confuse and possibly alarm cellphone users."

As many researchers are quick to point out, the science around the effects of RF energy on humans is not conclusive. But while the warnings in the CDPH document are not agreed on by the scientific community, it's important to be aware of the conversation.