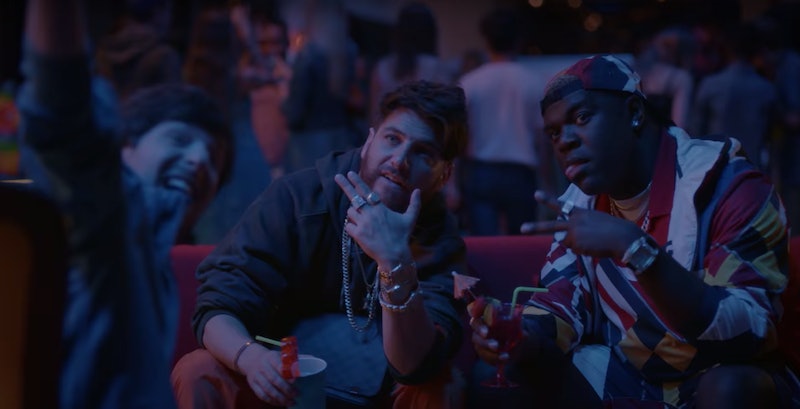 Detroiters may be canceled, but Champaign ILL will return Sam Richardson to your small screen in a hilarious Youtube Original comedy series. Is Champaign ILL based on a true story? Richardson and Adam Pally star in these series from from Pally, Daniel and Matthew Libman, as well as David Caspe.

In Champaign ILL, Pally and Richardson play friends who are forced to move home (to Champaign Illinois, a real place) when the rapper they've been accompanying professionally dies in a tragic accident. The three went to high school together, and maybe gave up on their own dreams to support the one who found fame and success. Here's the official description of the series, which is like a dark take on Entourage and movies like Garden State:

"Every rapper has a crew he can't live without... and vice versa. In the 10-episode comedy series from the creators of Happy Endings, we see how long the crew can survive without being in the limelight."

"We decided we wanted to work together," said Pally in an interview with Screenrant of his former Happy Endings collaborators. "We were looking at a bunch of different ideas," Pally said, "and we really related to this character that wasn't necessarily 'the guy,' but was next to 'the guy.' Those guys tend to be the most entitled. Once we nailed that down, it became about this hip-hop entourage, because we thought that would be a really funny place to play entitlement."

So, while we all know those second in command types who feed off their more talented associates, it's not based on a true story. It's not even based on a true friendship — that is to say, Pally and Richardson were not known as a comedy duo before this series. Both actors have an improv comedy background, Pally at the Upright Citizen's Brigade in New York (and LA) and Richardson at Second City in Chicago, but haven't worked with each other before now.

"All of these relationships happen organically," Pally told Screenrant. "You have to just let it happen. Sam and I got to know each other, and we were like, 'oh, we have a very similar upbringing in a lot of ways, different in others,' but we were able to just click in right away as if we were going out on stage to do an improv piece."

However, there are a few connections and real life inspirations that one could put together and end up with Champaign ILL. For one thing, according to Metro, Pally and Richardson met at a Run The Jewels concert. When you think about it, the two kind of look like Killer Mike and El P in the series — though the characters in Champaign ILL are members on the entourage, not artists themselves.

Then, also according to Metro, Pally met Richardson's Veep co-star Anna Chlumsky, and she suggested Richardson for the role in Champaign ILL. So the fates conspired, it seems. For another thing, Pally assisted in his friend (and former Happy Endings writer) Gil Ozeri's ill-advised 47 hour long Entourage marathon, so he is well-versed in all things Hollywood hangers-on. So while the series is not entirely based on any one person or situation or story, that doesn't make it any less funny and any less inspired.