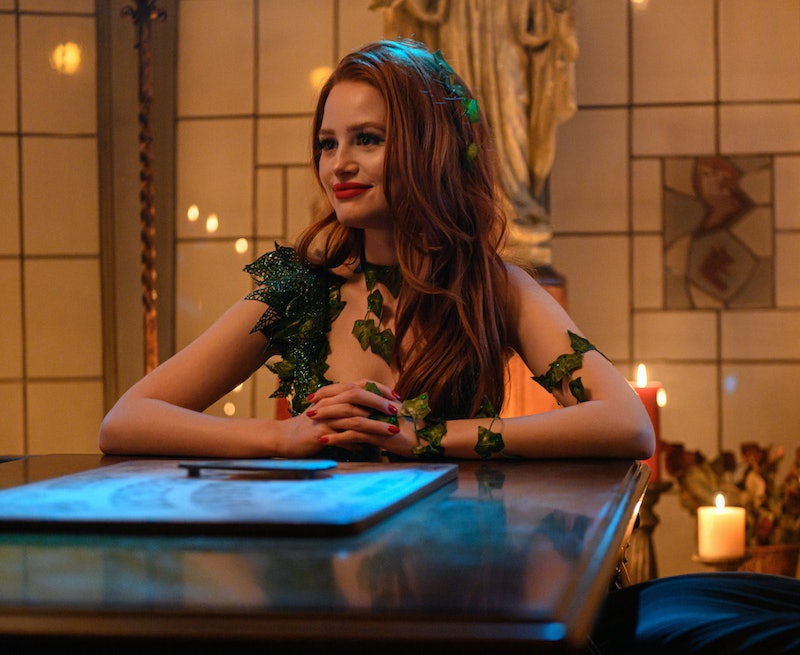 Nana Rose dropped an ominous line in Riverdale's Oct. 23 episode that everyone on the show kind of glossed over. After Cheryl awoke to a scream and found Nana Rose by a crackling fire, Nana seemed to confuse Cheryl for her mother, calling her Penelope and saying, "There you are. Thank heavens. I thought I saw the triplets burning in the fire." Cheryl seemed to think that Nana Rose was just disoriented and mistaking Polly's twins Juniper and Dagwood for triplets, but what if she wasn't? Is it possible Cheryl has another sibling?

Hints from the upcoming episode only seem to validate this theory. In one of the trailers, Cheryl seems to think the house is being visited by Jason's ghost. "He's angry and now he's haunting us," a frightened Cheryl says. In another trailer, she, Toni, and Nana Rose seem to be attempting to communicate with that ghost using a Ouija board, but Toni says that she doesn't think it's actually Jason moving their hands on the board. Nana Rose agrees: "It's Julian."

Here's where this theory really gains momentum. According to Digital Spy, in one iteration of the darker Archie Comics graphic novels called Blossoms 666, which was published earlier this year, Cheryl and Jason did have another sibling named Julian Blossom. He didn't grow up with Cheryl and Jason because he was kidnapped by a cult as a child, and when he returns as a teenager, he's murdered by Cheryl and Jason. It's possible the show is borrowing loosely from that comic and will make Julian a recently escaped member of The Farm, or perhaps it's Julian's body that Cheryl has in her basement, and Jason is still alive.

As Digital Spy pointed out, there's also reason to believe that Cheryl may have absorbed a triplet in the womb. In September, Riverdale creator Roberto Aguirre-Sacasa shared a spooky image of Cheryl on Twitter along with this caption: "Chimera: A single organism that's made up of cells from two or more 'individuals' — that is, it contains two sets of DNA due to placental fusion during development." Does Cheryl have Julian's DNA? Stranger things have happened on Riverdale.

Whether Julian died before birth, after birth, or is still alive somewhere, it doesn't seem like Nana Rose simply slipped up when she mentioned "triplets." Julian certainly wouldn't be the first secret sibling the show has introduced (ahem, Charles Smith), and the big triplet reveal could happen any episode now... say in Episode 6, which is titled "Hereditary" and warns that "Cheryl and Toni get some unexpected visitors at Thistlehouse." More like Tripletshouse.

More like this
Netflix Shut Down 'Bridgerton' S3 Rumours About A “Very Dark” Storyline
By Bustle
'The Queen’s Gambit' Season 2 Tweet Wasn’t From Anya Taylor-Joy
By Mary Kate McGrath, Jack Irvin and Grace Wehniainen
Everything To Know About 'And Just Like That...' Season 2
By Jack Irvin and Grace Wehniainen
Wait, Is 'Happy Valley' Not Actually Over?
By Darshita Goyal
Get Even More From Bustle — Sign Up For The Newsletter
From hair trends to relationship advice, our daily newsletter has everything you need to sound like a person who’s on TikTok, even if you aren’t.