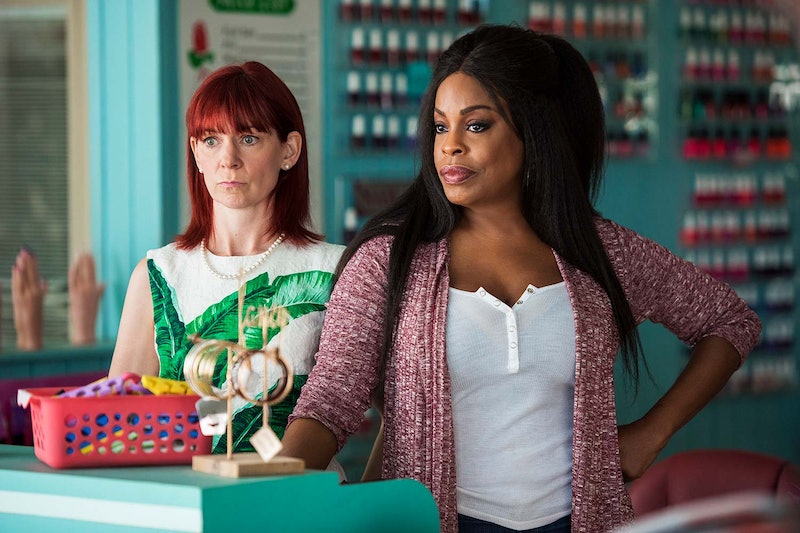 TNT's new crime dramedy Claws premieres Sunday, June 11. The series, which is executive produced by Angie Tribeca and Parks And Recreation star Rashida Jones, is set in a Florida nail salon. But the employees aren't solely concerned with acrylics and fills; they also get wrapped up in the daily activities of a drug ring. While the storyline ought to be enough to grab your attention, Claws also features a diverse ensemble cast, including Niecy Nash, Carrie Preston, Jenn Lyon, Judy Reyes, and Karrueche Tran. Audiences may find themselves relating to them, but are these characters based on real women? Claws isn't based on a true story, but the writing and performances draw on real life in a lot of ways.

In a Bradenton Herald interview, Claws writer Eliot Laurence discussed the real-life influence behind Nash's character, the nurturing mother figure of the salon. Laurence explained that his Aunt Vicky, who passed away last year, was his main inspiration for the script and for Desna. "She taught me everything I know about humor," Laurence said. "Vicky loved getting her nails done, and she would love this show. She would absolutely love this show.”

While the show was written with an unforgettable aunt in mind, the money laundering scheme that ends up complicating the lives of nail techs is invented. There's no evidence that the Claws characters are based on anyone specific in regards to their less-than-legal activities. Though, the town of Palmetto, Florida, where the show is set, provided a template for the feel of the series.

On set in New Orleans earlier this year, Preston talked to Bustle about how Claws draws on the culture of Palmetto. According to BestPlaces.com, the small town has an exceptionally high crime rate (90 of 100) which is reflected in the series not just in the drug ring, but also in Preston's character, Polly. Polly is mild-mannered and feminine; she comes over as a polished, Southern lady. But, when the series picks up, Polly has recently served time for identity theft and dons an ankle monitor.

"Palmetto, Florida is this small, small, town. It’s surrounded by water so it’s sort of its own little island," Preston says. "There’s a lot going on in that area in Palmetto, which informs the genesis of the show."

She goes on to talk about how Claws fits into the tradition of "Florida noir," a type of crime fiction that books by Elmore Leonard, Ernest Hemingway, and others would fall into. "You think of Florida noir, there’s a type of literature and movie that they’re trying to recreate here or pay homage to in Claws," Preston says. "So it’s a fun genre to hit upon, and it’s an interesting balance between camp and drama."

Preston's co-star Lyon (Jen) cites her own Southern upbringing as an influence on the tech she plays. Jen is a barely-sober former party girl who rocks an over-the-top Southern style.

"I’m a Southern girl raised in North Carolina, and we used to go to Myrtle Beach every summer. And we still say, if you get really tanked on alcohol, we call it 'Myrtle Beach drunk,'" Lyon tells Bustle. "It’s a very specific kind. And Jen is very Myrtle Beach. It’s too much. All the accessories, all the hair, all the everything, but that’s how she feels good about herself, so that’s how she does it up."

Lyon also has a strong understanding of the complicated and devoted female friendships at the heart of Claws. "Southern women are very interesting in their fierce loyalty to each other," she says. "And we’ll read you to filth to your face... because we love you. I think that’s really at play here."

Nash points out that the show also strives for realism in some of its more R-rated elements. She expects female viewers especially to take to Claws, "because we are mature women and still have sex lives." And these sex lives aren't all scented candles and billowing curtains.

"And not all sex is sexy. So we have some places we go to in the show that are just real life," Nash continues. "So, I think it’s going to be interesting, I’m going to tell my kids to cut the TV off, don’t watch this one now. We just lost three viewers."

While the women of Claws should — if the series is successful — feel real, it seems that a lot of the dramedy's dark humor and thrills are based entirely in fiction. But that doesn't sound like a bad thing. Claws may be the perfect mix of realistic Southern sisterhood and high-stakes drama — it is Florida noir, after all.