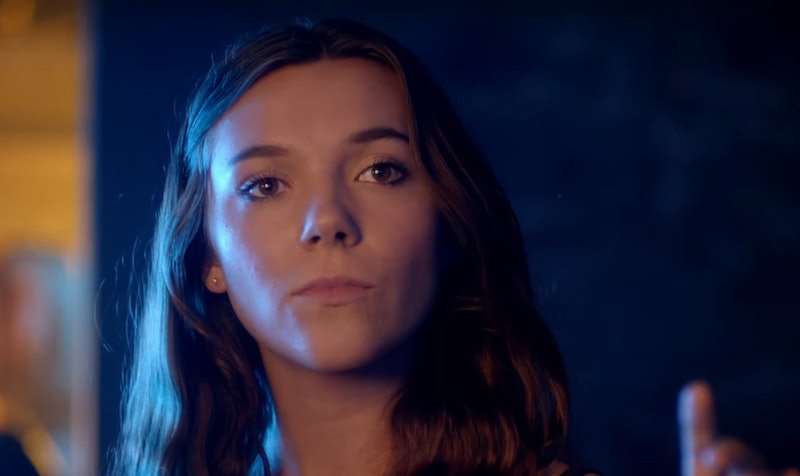 If you've been waiting for the next round of angsty, hard-partying UK teens to fill the void of Skins, well, BBC Three's Clique is your solution. The series, which makes its American debut on Pop Nov. 7, comes from former Skins writer Jess Brittain and stars Synnøve Karlsen and Aisling Franciosi as two best friends forced apart by an elite, perhaps dangerous group of college girls. Luckily, Clique isn't a true story, but that doesn't mean it wasn't inspired by real-life college students — or a few familiar ones from other shows.

According to a review from The Guardian, Karlsen and Franciosi play childhood besties Holly and Georgia, both starting their first year at Edinburgh University. Before long, Georgia is invited to join a popular clique at school, but as her behavior becomes erratic, Holly feels compelled to take action, uncovering a corrupt, increasingly high-risk world that threatens both her and Georgia.

If the idea of a nasty, high society clique brings up memories of Queen Blair Waldorf and her Upper East Side minions, well, that might not be an accident. In an interview with Radio Times, Brittain revealed that Gossip Girl majorly influenced Clique from the beginning, as well as Donna Tartt's novel The Secret History.

Gossip Girl was definitely an influence. We wanted to be unashamed of heading towards that high-gloss and high dynamic look because that’s kind of how it looked and felt, weirdly to me at uni, watching the women who had it together. I was exaggerating it in my mind I’m sure but it didn’t feel that far away from that. Also, Donna Tartt’s The Secret History was around a lot in my mind. This is fiction, but some of this felt really real to me when I was at university. Writing Clique has been cathartic.

Before she was in the writers' room, Brittain initially worked on Skins as part of a teen focus group that helped the writers understand what life was really like for middle class kids in Bristol circa 2007, when Season 1 aired. Later, she was hired as a writer on the series herself. But when she set out to do research for Clique, the lives of modern teenagers seemed worlds away from what she had experienced and wrote about just a generation before. In an article she wrote for The Guardian on her new series, she explained how she perceived the difference between the Skins generation and Clique.

"The characters from my new show Clique, about two childhood pals who go to university in Edinburgh and find themselves lured in by an elite gang of women, would probably consider me and my friends a nihilistic alien race. Because, while Clique draws on my own social insecurities and failings at university, the stakes for young people are very different to the ones I experienced. Teenagers aren’t allowed to be dicks anymore."

Brittain went on to talk about all the stresses placed on students today, from ever-rising tuition and loans to a seemingly hopeless job market and the pressures of social media, all of which make little time for simple things like having fun and making mistakes. These struggles act as the heart of Clique, driving Georgia and Holly's decisions as they try desperately to find success and fit in at the top.

So, just because Clique isn't based on a true story doesn't mean its characters don't have plenty of problems for young, modern women to relate to... OK, and a few over-the-top ones thrown in for good measure. It is a thriller, after all.