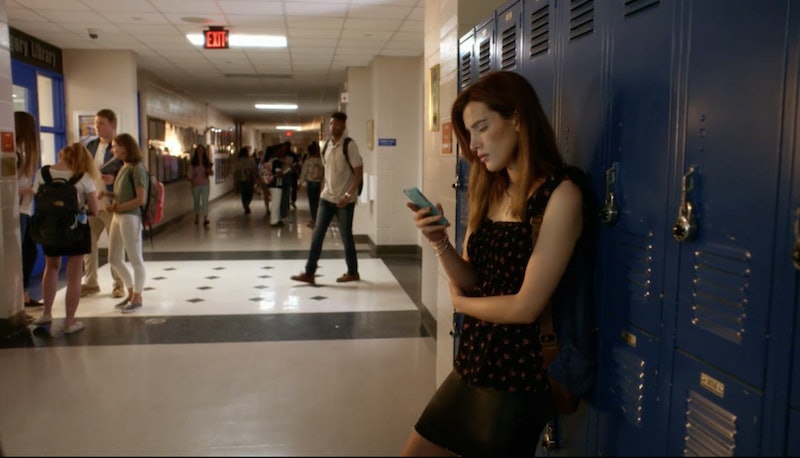 When it comes to immortalizing dysfunctional romance onscreen, Lifetime seems to have the recipe down to a science. Their latest twisted thriller, Conrad & Michelle: If Words Could Kill follows two teens whose love story ends in tragedy. And if their names ring any bells, it's because they should: Conrad & Michelle is based on a true story, and a quite infamous one at that.

As reported by CNN, Michelle Carter first made headlines after her boyfriend, Conrad Roy III, died by suicide in 2014. According to the outlet, prosecutors claimed she sent more than 1,000 text messages to Roy allegedly urging the 18-year-old to kill himself. Carter's attorney, Joseph P. Cataldo, denied the charges in a 2015 statement to the Standard-Times of New Bedford.

“This is terrible tragedy – a young man taking his own life,” he said at the time. "[The district attorney’s office] is trying to pin the blame on someone. I can’t understand why they brought the charge. They’re trying to claim there is manslaughter when they freely admit the boy took his own life. You can’t have it both ways.”

Per the Washington Post, Carter was charged with involuntary manslaughter in June 2017 and sentenced to two and a half years in prison. Last July, her lawyers filed an appeal. “Because the judge convicted Carter for what she said, or failed to say, not what she did, this case implicates free speech under the 1st Amendment,” they argued in a brief, also via WaPo.

Whatever the status of Carter's case, Lifetime is certainly emphasizing that Conrad & Michelle is inspired by a true story. According to the movie's official synopsis, it's "based on on real-life events, court testimonies and authentic texts," while the trailer suggests the film will explore Carter's relationship with Roy before his death. The characters of Carter (Bella Thorne) and Roy (Austin P. Mckenzie) are both described as troubled teens who turn to each other for support, communicating via text as they share a "toxic relationship of dependency." Much like in the real-life case, Roy ultimately takes his own life, leading the nation to "question the power of technology" and whether or not texting – and, in turn, Carter – are to blame.

That dichotomy seems to mirror Carter's actual trial, too. Roy's cousin, Makenna O'Donnell, slammed what she perceived as lenient sentencing during a 2017 appearance on Good Morning America, while Carter's own family has stood behind her. "I am 100 percent sure she was only trying to do what in her mind was right for Conrad," her father, David, wrote in a letter obtained by the Boston Herald and republished in part by CBS.

Still, it's important to take Conrad & Michelle with a grain of salt. Neither Carter, her family, or Roy's family have publicly commented on its existence, which means any real-life parallels are, as far as we know, purely speculative. See Lifetime tackle the case when Conrad & Michelle premieres Sept. 23.