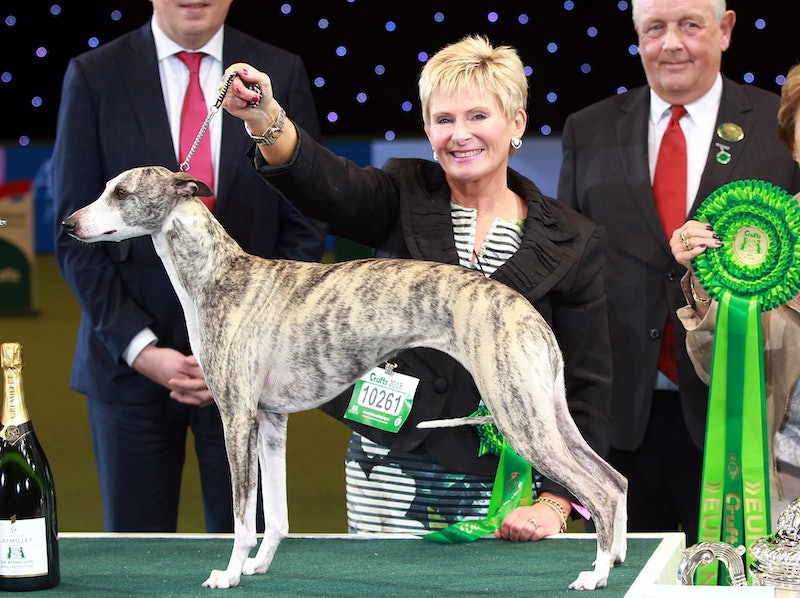 Thank goodness it's that time of year again. This is my World Cup, my Superbowl, and my Olympics all rolled into one. Yes, people, I am very happy to announce that Crufts season is upon us again. Each year, the very fanciest of pooches head out to the world's largest dog show and compete to be named Best in Show. Besides that, there are also agility shows and doggy dancing, but is Crufts 2019 on TV? If you aren't lucky enough to be there yourself, you won't want to miss out on this most beautiful display. It's time to get ready for the American Idol of the dog world once again.

"A true hero," "a national treasure," "a god among men," these are just some of the things I cried out at my TV screen when Tease the whippet won Best in Show at Crufts 2018. I'll probably be doing the same this year, since Crufts will thankfully be airing on TV once again. According to the Express, you can watch highlights of the show on Channel 4 on Thursday, March 7 at 8 p.m. through to Sunday, March 10. Or if you really wanna go hard, then you can watch further coverage of the show across the day on More 4. Go hard or go bone, right?

While some people listen to podcasts while they work, that doesn't really cut it for me. Each annual Crufts season, you won't see my laptop open without a live YouTube stream of Crufts. I would seriously recommend you doing the same. Nothing feels as stressful when you have an endless stream of fancy dogs running around, being all posh and pretty. Here's a 12-hour live stream from 2018's event, so you can see what sort of thing to expect. And I promise I don't have it on right now...

OK. Obviously, that was a lie. But if you really want me make me jealous, then go ahead and get yourself a ticket from the Ticket Factory website, which are still available (how?!). Taylor Swift sells out in minutes, why can't Crufts? The Crufts weekend takes place at the NEC Arena in Birmingham, and it houses thousands of dogs each day. I have of course been and, let me tell you, it was very hard to convince me that I hadn't just died and gone to heaven.

You can find the full schedule of events for the weekend over at the official Crufts site. Most days kick off around 8 a.m. and round off just before 9 p.m., so if you can manage that whole day, then you'll have my serious admiration. Don't worry, the dogs don't have to last that long, as each breed and dog group has their own event, and the day's split up pretty nicely.

So, who might win this year? I really couldn't tell you. I honestly still have no idea how the judges pick a winner, but as it's been a while since a big guy took home the trophy, I'm hoping to see a big, drooling St. Bernard take home the Best in Show prize. Trust me, I'll be watching.