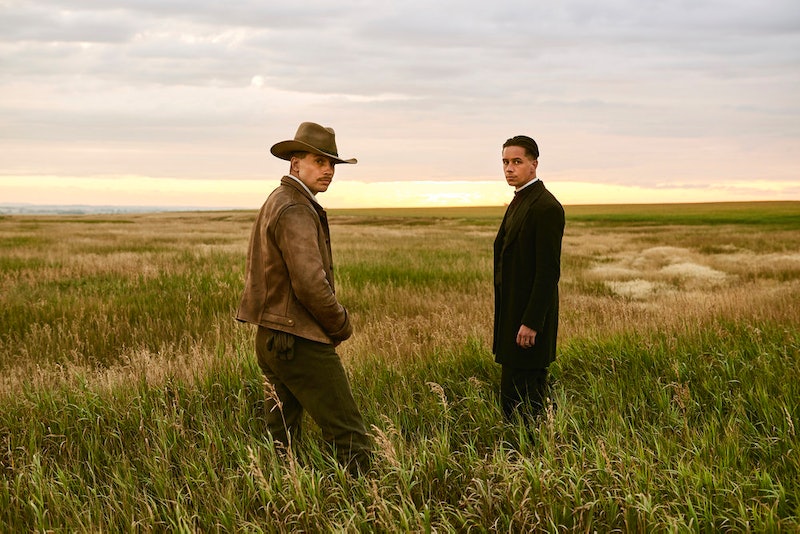 The new USA Network period drama Damnation premieres on Nov. 7 and takes audiences back to 1930s middle-America. The show centers around an explosive conflict in small-town Iowa, but are the events of Damnation true? The show focuses primarily on Seth Davenport (Killian Scott), a violent preacher with a taste for revolution, and Creeley Turner (Logan Marshall-Green), a hired gunman meant to squash any uprising that may occur. While the story uses American history as its setting, the characters and circumstances found within Damnation appear to be all entirely fictionalized. But they do bear some resemblance to some other famous stories.

The violent, twisted story of Damnation makes it a perfect fit for 21st century television, even if the time period it attempts to capture happened more than 80 years ago. Show creator Tony Tost said in an interview with USA that he had "started digging around and got really interested in what was going on in the middle of the country during the Great Depression, and it seemed to suggest a good space, and so that was a starting point [for the story.]" He also said that the show is not only inspired by real American history, but that it could be described as "Quentin Tarantino's Grapes Of Wrath."

The Grapes Of Wrath is one of the quintessential stories about the American Heartland. The novel was written by John Steinbeck, who penned similarly popular depression-era tales like Of Mice and Men, The Pearl, and other books you were probably expected to read if you attended high school in the United States. Grapes of Wrath details what living in poverty was like in the '30s in middle America, and the Great Depression's effect on businesses, churches, and regular citizens. It seems that this environment, where almost everyone is desperate for money and meaning, sets the stage for the violence present in Damnation.

While the show's creator has named The Grapes Of Wrath as a touchstone for the series, it also calls to mind one of the most acclaimed period films of the past decade. The 2007 film There Will Be Blood covers the first three decades of 20th Century America, stopping just shy of the Great Depression. However, the small-town rivalry between a suspicious preacher and a business-minded capitalist that arises in There Will Be Blood seems to mirror the central conflict present in Damnation. Damnation seems to be drawing from some pieces of American fiction about the sociopolitical realities of this particular era.

In an interview with Cleveland.com, Tost admitted that Damnation's influences don't stop at Steinbeck or the violent filmography of Quentin Tarantino. Tost also listed iconic western director Sam Peckinpah, the Pulitzer-prize winning novel Gilead, and the non-fiction book Hard Times: An Oral History Of The Great Depression among his many inspirations. While Damnation may have invented the details of its story, the creative forces behind the show seemed to do their homework when it came to capturing an accurate picture of what life was like then.

While many of the show's influences are set 80 years ago, the most surprising source for Damnation may be 2017. Tost told Cleveland.com in the previously mentioned interview, "If you look at the 1930s — a time when there was increasing distrust in institutions, there was fear of finding meaningful work, there is this onslaught of new technology taking away jobs — the relevance [of the show to 2017 audiences] is almost inescapable."

Damnation may be a stylized portrait of 1930s America, but the story is also viewed through the lens of 2017. So the period piece may not be escapism as much as a reminder that culture is cyclical and history does repeat itself.

More like this
‘The Simpsons’ Will *Finally* Address How They “Predict The Future”
By Sam Ramsden
The Bestselling Novel 'The Doll Factory' Will Be Adapted Into Thrilling TV Series
By Catharina Cheung
'The Sandman’s Ending Is A Departure From Neil Gaiman’s Comic Book Series
By Kadin Burnett
What's New On Netflix: A Third '365 Days' Movie & Lili Reinhart’s New Film
By Arya Roshanian
Get Even More From Bustle — Sign Up For The Newsletter