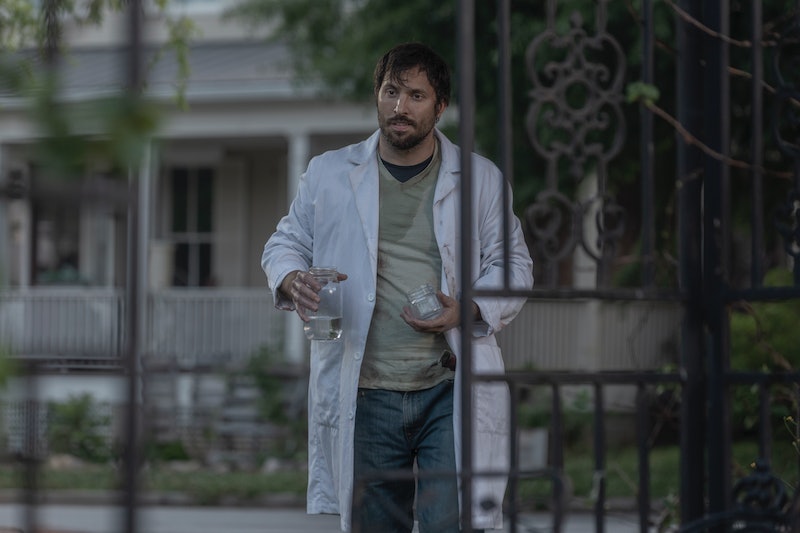 The Alexandria Safe-Zone's new doctor on The Walking Dead is so extra, and potentially suspect, that fans may want to look to Dante in the comics to figure out what he's all about. In the Season 10 premiere of the AMC series, it was impossible to figure out what Dante's deal is. Is he flirting with Siddiq (totally understandable), or is he just that psyched about medicine? Is he secretly a bad guy? The source material may be able to make sense of viewers' first impression.

“[Dante] is this roguish, fast-talking, sometimes charming, sometimes annoying guy who can sometimes put his foot in his mouth, but is an interesting presence in the comics," said Angela Kang, Walking Dead showrunner, per Entertainment Weekly. So far, that checks out with his appearance on the show.

He shows up a little bit earlier in Robert Kirkman's graphic novel series than he does on The Walking Dead TV series. Dante is introduced in the "A New Beginning" storyline as one of the new Hilltop survivors in the flash-forward after Rick Grimes' "All Out War" against Negan and the Saviors.

It's actually Dante who first discovers the Whisperers in the comics, and is one of the hostages that Alpha trades for the safe return of her daughter Lydia. On the show, that role was split between Jesus, Luke, and Alden in Season 9. So The Walking Dead has been adapting elements of Dante's storyline long before actually bringing him into the story.

The most important thing about Dante in The Walking Dead comics, however, is that he has a huge crush on Maggie Greene. Dante becomes her new love interest after Glenn's death. He's never that optimistic that his feelings will ever be reciprocated, and he's correct in that assumption. Even when Dante and Maggie do hook up in Volume 30, she views it as a one time thing.

An official Skybound Entertainment (who publishes the TWD comics) blog comparing Walking Dead characters to Game of Thrones characters called Dante the Jorah Mormont to Maggie's Daenerys — which should give you a good idea as to what their doomed dynamic is like on the page.

Since Lauren Cohan will return to TWD as a series regular in Season 11, the arrival of Dante could be setting up this arc for the two of them. But not immediately. "In our world the context is a little different," Kang told EW, "and he will play an important role in the story in Alexandria.”

In the comics, at least, Dante does actually seem like a genuinely good guy — even if he is a little obnoxious at times. He can probably be trusted on the show for now. That doesn't have to mean that fans necessarily have to like him, but Alpha is enough of a concern; our heroes don't need to be worrying about eccentric doctors on top of it.

More like this
At 14, Jenny Han Wrote Rom-Coms About Her Friends & Fan Mail To Leo DiCaprio
By Alyssa Lapid
'The Summer I Turned Pretty' Book Ending Is An Emotional Rollercoaster
By K.W. Colyard
The Future Of 'All Creatures Great & Small' Is Confirmed & Wedding Bells Are Ringing
By Rebecca Fearn and Frances Stewart
A New Season Of The Midwich Cuckoos Could Be Coming “To A Town Near You”
By El Hunt
Get Even More From Bustle — Sign Up For The Newsletter