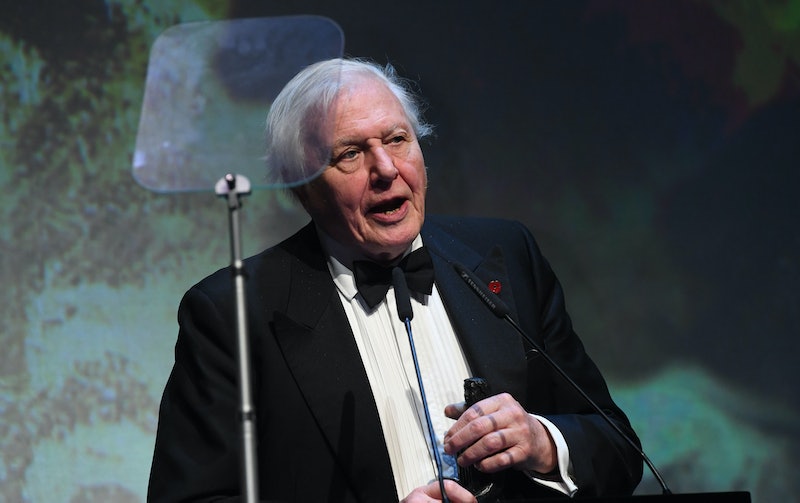 In a world that's constantly inundated with terrible things caused by terrible people in power, David Attenborough — the man who just loves a good leaf — has always provide an oasis of goodness. Attenborough has starred in countless nature documentaries throughout his career, but one in particular has captured viewer's hearts like none other, offering an escape from the hideousness of human beings by plunging us into a world where they can't be found: deep underwater. Now the filmmaker's exceptional Blue Planet series is being re-imagined in a new, live format, but will Blue Planet Live feature David Attenborough himself? Getting to see him live on screen would be incredible, since he's basically the Beyoncé of the natural world.

On October 11 2018, BBC announced the launch of Blue Planet Live, a live broadcast from three locations around the world (the East Coast of America, the Bahamas, and Australia’s Great Barrier Reef) that the BBC's director of content, Charlotte Moore, has promised will "thrill the millions of viewers who discovered so much from last year's ground breaking series that shocked the nation." The live shows will be aired in four parts, beginning on Sunday, March 24 through to the end of the following week. Just make sure to tune into BBC One each night at 8 p.m.

But will Attenborough and his ASMR-like narration be appearing live on any of those nights? Sadly not. Fortunately, however, the BBC have found some excellent replacements, who all seem well up to the job. For Blue Planet Live, you'll be kept in the capable hands of nature presenters Chris Packham, Liz Bonnin, and Steve Blackshall.

Packham will be based on the East Coast of America, where he'll be bringing light to the area's elusive "Twilight Zone," assessing the health of the world's whale population. Meanwhile, Blackshall will be getting the lowdown on all things sharky as he stations himself on a small island in the Bahamas, where a large shoal of them can be found.

Bonnin will be located furthest from UK TV screens, as she'll be bringing the Great Barrier Reef into our living rooms. Following her recent investigation into how plastic is damaging the world's oceans, Bonnin will be monitoring how well sealife is currently faring — if at all — in its increasingly fragile ecosystem.

Sure, it's not Attenborough, but these three seem like the ideal trio to carry on his legacy, and to explore the extent to which humans are impacting the world's oceans.

But don't worry, Attenborough's still working on other projects. According to The Sun, the reason he isn't going to be around for Blue Planet Live is because he's been too busy working on his latest series, Dynasties. This series sees Attenborough looking back at the evolutionary histories of chimps, emperor penguins, lions, painted wolves, and tigers.

But will Attenborough be making any other TV series else in the future? Well, as the filmmaker said in a recent BAFTA acceptance speech, the nature docs will keep coming "as long as [he's] vertical."