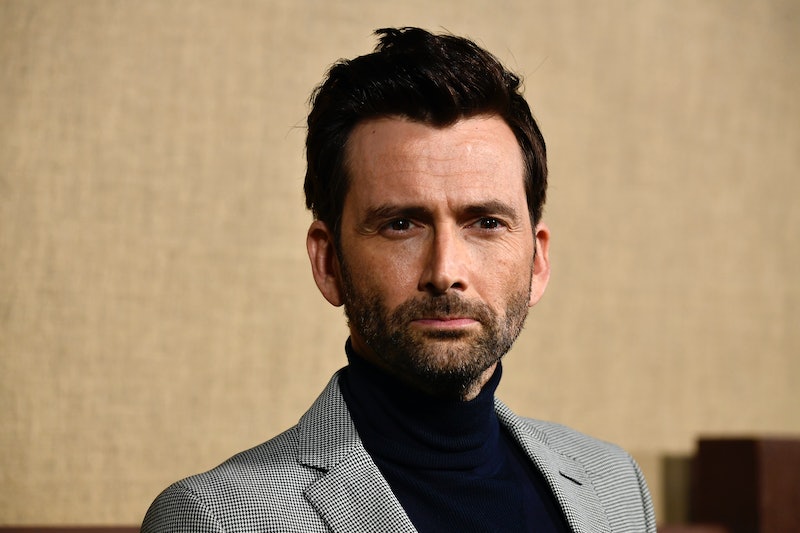 David Tennant's probably been your slightly nerdy crush ever since you first saw him don his Doctor Who get-up, and it's likely that you've been wondering whether he's taken ever since. So is David Tennant married? While the answer might disappoint you, it's a Whovian love story that'll make you reminisce about the days when Tennant played quite possibly one of the greatest iterations of the Doctor ever. As it turns out, Tennant met the woman he was going to marry on the Doctor Who set, but that's not the only connection their relationship has to the show.

It's sort of an inside joke to many Whovians, but the woman Tennant ended up marrying is actually his predecessor's daughter. Moffett is the daughter of Peter Davidson — the fifth Doctor, which makes this family quite the Doctor Who dynasty. But the weirdness doesn't end there, as she also played Doctor Who's clone daughter on the show during Tennant's days as the Time Lord.

According to the Daily Mail, the pair originally met on set while they rehearsed for an episode which aired in 2008, appropriately called "The Doctor's Daughter" in which Moffett appeared as the character Jenny. From there, romance blossomed, and in 2011 after three years after of dating and two years after Tennant's last show as Doctor Who, they got married and had their first child together, as Hello Magazine reports. So 2011 was a pretty busy year for this pair then.

According to Cosmopolitan, they got hitched on New Year's Eve in 2011, before they hosted the reception of every actor's dreams at the Globe Theatre in London with several of their performing pals. Those guests reportedly included Stephen Fry and Will Mellor who got to enjoy a spectacular fireworks display on the night.

According to the Daily Mail, Moffett had the hots for Tennant even prior to meeting to him onset, revealing in an interview: "David is dishy, isn't he? He's not only a good-looking but he is such a lovely, sweet guy." The actress first came to prominence when she appeared in several episodes of ITV's doctor drama Peak Practice in the early 2000s, before she landed a regular role in The Bill soon after.

The happy couple currently have four children — Ty, Georgia, Wilfred, and Olive — according to Hello Magazine. "It's getting a bit ... it's a bit of a brood!" Tennant joked to Christian O'Connell on his breakfast show in 2012, when asked about his love life and situation at home. Otherwise, the couple have been kept things very hush hush concerning all things about their life at home.

When asked about his private life, Tennant assured: "I understand there's an interest, and I don't want to feed it," Tennant told The Guardian in 2013. While they've successfully managed to maintain that wall between their private life and the outside world, you can watch them here together in the short "96 Ways To Say I Love You".