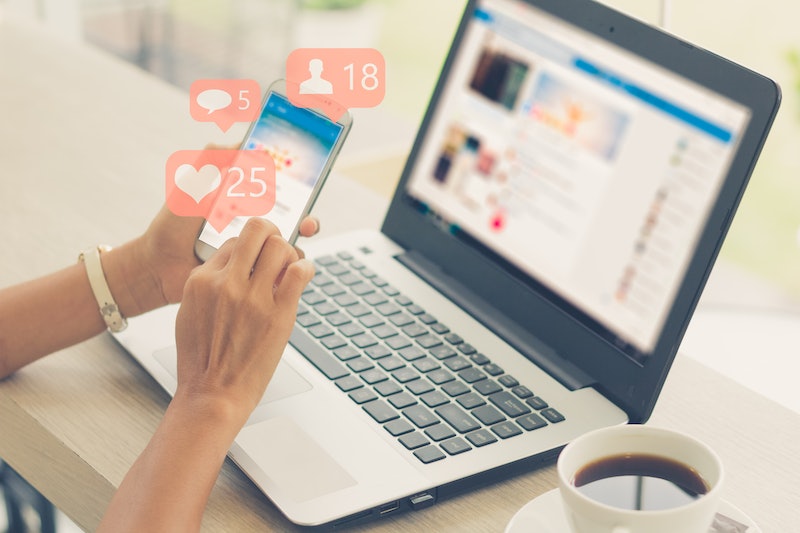 There are a lot of things to envy about the influencer lifestyle (travel! great photos! tons of adoring followers!), but there are plenty of downsides to living your life so publicly, too. So of course, Lifetime had to make a movie about the worst case scenario. Their newest flick, Deadly Influencer, isn't based on a true story, but it easily could be.

According to Lifetime's description, the film follows an 18-year-old named Skylar, who has turned her obsession with managing her peers' social media careers into a full-fledged business. However, Skylar is a little too passionate about what she does, and has already taken things too far by murdering the most popular in her school. Now, she's found a new target: Jessica Lake, a new girl in class who is starting to make a name for herself as a fashion video blogger.

Skylar manages to convince Jessica that she can take her to the next level of success and they presumably become close, but Jessica’s mother Lynn is not so sure about this union. As expected, Jessica and Lynn discover that Skylar is a dangerous killer who will stop at nothing to make Jessica her next victim. It’s a truly bizarre concept, but anything is possible when a person becomes obsessed with someone else’s life.

The very creepy Deadly Influencer trailer doesn't give much additional context, but the synopsis alone is enough to garner plenty of interest and questions. How did Skylar become a social media influencer manager? Does she run a popular page of her own or is she just a slick talker who preys on people? It will be interesting to see why people trust her so much and if she is actually getting anything out of meddling in people's business.

What does Skylar gain from killing her clients? Her rationale doesn't really have to make sense considering 1) people do evil things and 2) this is a Lifetime thriller, but it seems like an odd move to kill off your "clients." Perhaps she wants to eliminate her competition so her own accounts can continue to grow or she's simply jealous of others success. Either way, Skylar is doing a little too much for fame.

Will Jessica's mother die? Probably. The suspicious people in Lifetime movies always end up confronting the killer alone at night and - surprise- they die because they tried to intervene in the murder plot. Jessica and Lynn better team up and phone a friend before they confront Skylar. And, where are Skylar's parents? Do they know that their daughter is running a scam business so she can kill her classmates? Or, are they vaguely aware that their daughter is dangerous and choosing to mind their own business lest they want to be next on her list? Anything goes in a salacious flick and thankfully fans can enjoy every minute because it's not based on a real-life scenario.

Find out if Skylar's reign of terror can be stopped when Deadly Influencer debuts on Aug 9.