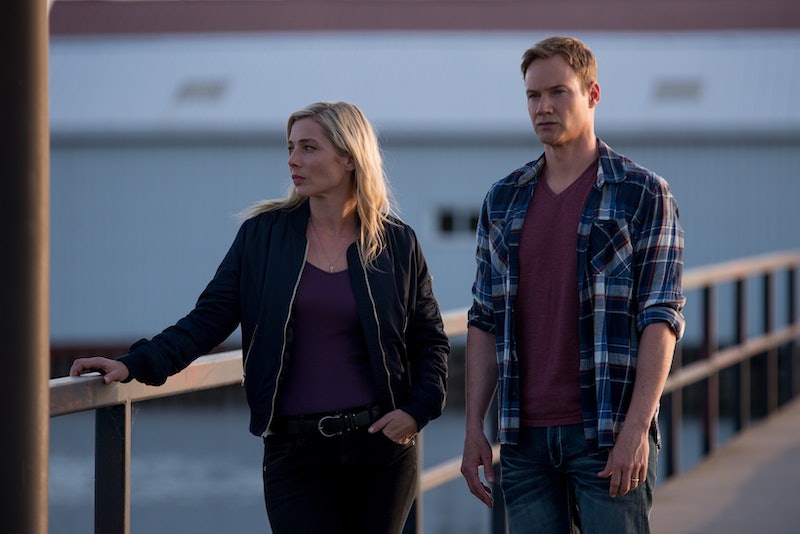 Though plenty of Lifetime films have been inspired by true events, this one is not. It is, however, part of a large fictional universe. In conjunction with the film's premiere, publishing house Harlequin will release When Secrets Kill, a book by Zoe Carter that picks up where Deadly Secrets By the Lake leaves off. In the movie, Stefanie Von Pfetten (Shooter) stars as Jennifer Riley, a decorated NYPD detective drawn back to her hometown of Thornwood Heights after her sister, Lauren (Ferelith Young), is charged with killing her boss. But as Jennifer attempts to make amends with the family she left behind 20 years ago, she uncovers a long-buried secret that threatens to unravel Thornwood Heights' idyllic facade.

Carter's novel shifts the perspective to Lauren, who has since been exonerated for her boss's murder. Determined to start fresh, she takes over the Townsend Report and sets out to help Trevor Gallagher, a former solider desperate to find his sister — a young woman who, like many before her, has disappeared. Together, they stand up to the powerful families and police that rule Thornwood, but, according to the official description, Lauren soon becomes endangered, and the pair realize "secrets will kill" (hence the title).

On top of Deadly Secrets By the Lake and When Secrets Kill, Lifetime and Harlequin also launched a website for Thornwood Heights — an immersive, multi-media digital and social experience, including short form stories, podcasts, and interactive storytelling and gaming. There, viewers can learn more about the main characters and their familial rivalries, read articles from the town's news blog, watch vlogs, and explore movie locations to collect clues, among other things.

So, while Deadly Secrets By the Lake isn't true, Lifetime's hands-on approach may make it feel like it is — or at the very least, it could make for some realistic escapism. From the sounds of it, there seem to be a lot of threads within the Thornwood Heights saga, so a place to piece everything together seems helpful. And for major fans of Lifetime movies, it's an intriguing way to keep the story going. Dive in when Deadly Secrets By the Lake airs June 2 — the same day When Secrets Kill is released.