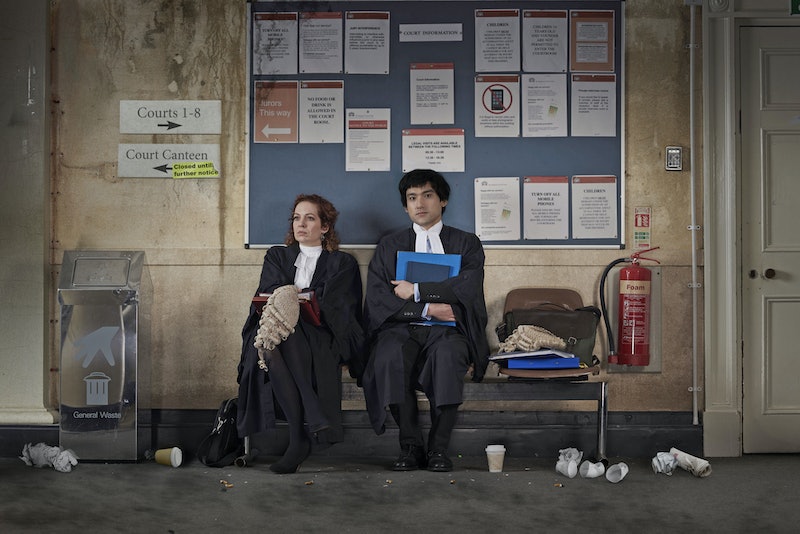 Fast-paced, thrilling dramas have become the BBC's forte recently. But if you're getting worn down from all that action, the broadcaster has a new sitcom up their sleeves. This BBC Two legal comedy takes place in the halls of the British justice system, which can actually be a surprisingly absurd place to work. But is Defending the Guilty based on a true story?

Based on the memoirs of criminal barrister Alex McBride, the series takes the real experiences of Bride and turns them into a situational comedy. "Alex's book was expert, authoritative and hilarious," Kenton Allen, Cheif Executive of Big Talk told the BBC. "[A]nd in Kieron Quirke's excellent hands, the real life of Criminal Barristers will be an eye popping, roller-coaster ride through our criminal justice system that will make you re-examine everything you thought you knew about Great British Justice."

Following the trajectory of shows like Veep and The Thick of It, Defending The Guilty sees pupil barrister Will Packham (played by Will Sharpe) traverse the courtroom with the guidance of pupilmaster Caroline (played by Katherine Parkinson). "Will must navigate his way through a criminal justice system seemingly designed to be as opaque and confusing as possible," the synopsis reads. "While also dealing with his fellow pupils, each of them after the same single job at the end of their training and more than happy to stab each other in the back to get it."

McBride recently penned a piece for the Telegraph, where he spoke of the journey that his career has taken him on — from the courtroom, to print, and to screen. "It's a peculiar experience having your old life turned into a comedy," he writes. "Will Sharpe, who plays idealistic pupil Will Packham, is a 'sort of' me, who's come to the Bar late having hit the nearly-30 panic button marked, 'Law'."

As McBride writes, obviously "crime is not a laughing matter". But it's the disasters he found himself in as a pupil barrister that lends itself to the comedy in both his memoir and the series. "[T]he first few episodes avoid dark and upsetting stories and concentrate, instead, on fleshing out the characters and the world they work in," McBride explains. "As the series unfolds things do get a bit darker, however. The twists are stilly funny, but they become colder, and more poignant."

Defending the Guilty also portrays parts of the job that viewers may otherwise be unaware of, like "dressing your client" and "trying to unearth what the prosecution might be hiding", as McBride explains in his piece. "But, the series is also a tribute to the Bar. It has done a brilliant job in providing clever, determined people from all background, genders and ethnicities a way into a high status profession."

It also helps that Defending the Guilty has a stellar comedic duo at its helm, with Sharpe and Parkinson previously seen in the likes of Flowers and The I.T. Crowd.

"The core cast have irresistible chemistry and the writing fires out whip smart lines in all directions," Shane Allen, Controller of BBC Comedy Commissioning said in a statement. "A very classy addition to the BBC Two canon of comedy".

Defending The Guilty starts tonight at 10 p.m. on BBC Two.

More like this
ITV's 'Maternal' Was Inspired By A Very Simple – & Unanswerable – Question
By Maxine Harrison
The Banned 'Friends' Ad Shows Monica As You’ve Never Seen Her Before
By Sam Ramsden
Con O'Neill Was Connected With Sarah Lancashire Long Before 'Happy Valley'
By El Hunt
'The Catch' Revisits A Famed Irish Filming Spot From 'The Tudors'
By Darshita Goyal
Get The Very Best Of Bustle/UK
Sign up for Bustle UK's twice-weekly newsletter, featuring the latest must-watch TV, moving personal stories, and expert advice on the hottest viral buys.