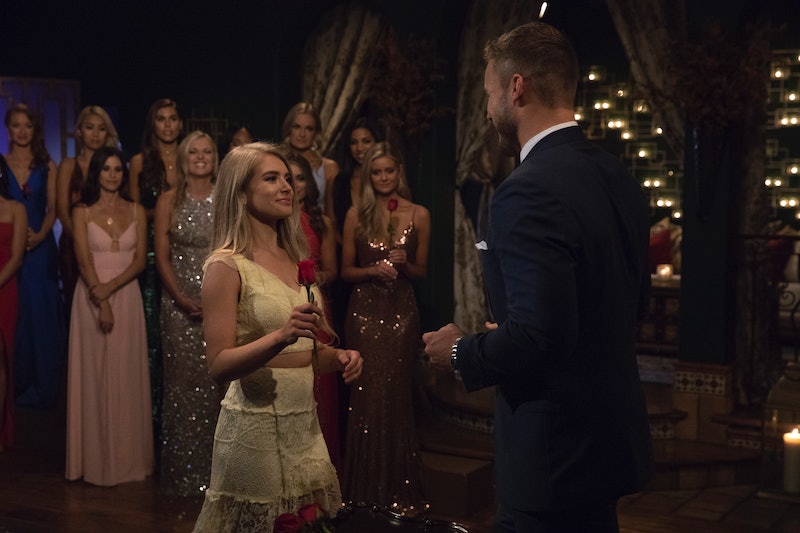 You either love Demi or you don't as a Bachelor fan. And so far, it's unclear if Colton does, or if Demi Burnett is single after The Bachelor. She made it a point to be bold and make her feelings known — from kissing Colton on stage in front of the other girls to ushering him upstairs to her "fantasy suite" wearing a fuzzy robe. She was definitely edited as the season's villain at first, but at this point, anything could happen.

Back in early January before the show's premiere, Us Weekly reported that she was spotted out in New York City with Paul Calafiore, known for appearing on Big Brother and MTV's The Challenge. An onlooking fan, who was waiting in line to see Hamilton on Broadway at the time, spotted a blonde in the passenger's seat of Calafiore's car.

Calafiore has a complicated dating history involving his ex, Cara, who was also cast on The Challenge, and his other ex Danielle Maltby, who is another Bachelor alumnus. After speculations that the blonde in the car was Maltby, Reality Steve confirmed that it was actually Burnett. So who knows what's going on with Demi and Colton these days.

According to Us, the outing between the two was strictly on the basis of friendship. Being new to the reality TV world, Burnett was allegedly asking Calafiore for advice regarding such a significant lifestyle change. Neither of them claim that their relationship is of romantic nature.

Burnett hasn't mentioned anything about a relationship or Calafiore as of late on her social media, but she did tag someone in a recent Instagram story with whom she appears to be close. That someone is Carlos Rodriguez, who appears to be at least a friend and photographer of hers. On Feb. 10, she re-shared a portrait he shot of her in 2017. She tagged him and wrote, "I love you sm."

According to his feed, Rodriguez has photographed many other women, so the post doesn't necessarily mean they're together or that "love" means anything other than a big ol' thank you for her picture. She could also theoretically be dating Colton at this point — women and men are allowed to be friends without it necessarily being some sort of scandal, no matter what people social media lead you to believe.

Meanwhile, Burnett's Facebook page unsurprisingly also does not share any relationship information, and she's made it clear that although she's interested in Colton, she doesn't need to be with anyone to be happy. "I sometimes get an overwhelming feeling of self love," she wrote on Twitter. "Like chills all over my body and tears in my eyes. Regardless of all the mistakes I’ve made and the difficulties I’ve endured, I am so proud of who I am. I am so thankful for my body for fighting for me every day."

So, as of right now, the only person Burnett is in a public relationship with is herself. And there's nothing wrong with that.