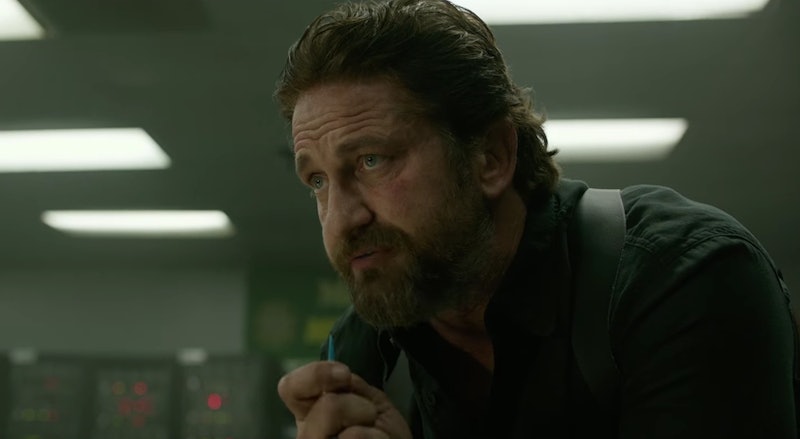 When Gerard Butler isn't voicing Stoick in a How to Train Your Dragon movie, you can usually find him in some high-speed car chase or dodging explosions while shooting at his opponent. Den of Thieves, which hits theaters on Jan. 19, is no different, though it is probably more realistic than a lot of the actor's films. So is Den of Thieves a true story then? The LA set crime drama tells a fictional story about a bank robbery, but it turns out that a surprising amount of the movie is based on reality.

Butler co-stars with Pablo Schreiber, O'Shea Jackson Jr., and 50 Cent, in this movie about two groups of tough guys. One is a squad of bank robbers pulling off major heists, and the other is an elite team that's part of the Los Angeles County Sheriff's Department. The film centers around the criminals' plot to rob the Federal Reserve Bank, which the movie's director and writer Christian Gudegast suggests isn't as fictional of a plot as you might think.

In an interview with The Wrap, Gudegast said, "L.A. is the bank robbery capital of the world, hands down, it always has been." He continued, explaining how his team made the film as realistic as possible. "We had several technical advisors like Bill Rehder who wrote a book called Where The Money Is about bank robbery in L.A.”

The consulting went further than just one source, though. In an earlier interview with Slash Film, Gudegast revealed that his team behind the film interviewed sources from the LAPD, the military, and even a former leader of Hell's Angels. They even made the bank mapping as realistic as possible by using the real set up of the film's location. "We worked with people at the Federal Reserve and said, ‘How do you make the impossible kind of possible?’" Gudegast told Slash Film. "We made it as real as we possibly could."

In case you're wondering if this means the plot of Den of Thieves actually could take place after the movie's release, rest assured that the Federal Reserve has tighter security in real life. "Could you really do it? Probably not," Gudegast revealed. It sounds like he would know, too.

In Den of Thieves, the break from good vs. bad to a more ambiguous morality also makes it a little bit more realistic of a film. While the law enforcement crew, led by Butler's character, may technically be considered the "good guys," it's not quite so simple in the movie. Even just from the trailer, you can get a sense that Butler's character isn't quite your average law abiding cop. "Do we look like the types who arrest you? We just shoot you," one of them says in the trailer. In another scene, Butler's character reveals that he didn't even bring handcuffs on the job, suggesting that a shooting might be the only option.

You might think that everything about this film sounds over-the-top and heavily fictionalized. A cop with no cuffs? According to Gudegast, though, it relies heavily on real-life accounts, which to him, is much better than anything he could imagine. "Truth is not only stranger than fiction, it’s much more fascinating than fiction," the director told Slash Film.

So a group of bank robbers on a hot streak goes against an elite team from the LA County Sheriff's Department, and neither of them exactly care about standard protocol or even the law for that matter. It sounds like it might be too wild to be even close to reality, but based on everything that Den of Thieves' writer and director has said in every interview, it's not. It may be a far cry from How to Train Your Dragon, but it's sure to be a thrilling movie.