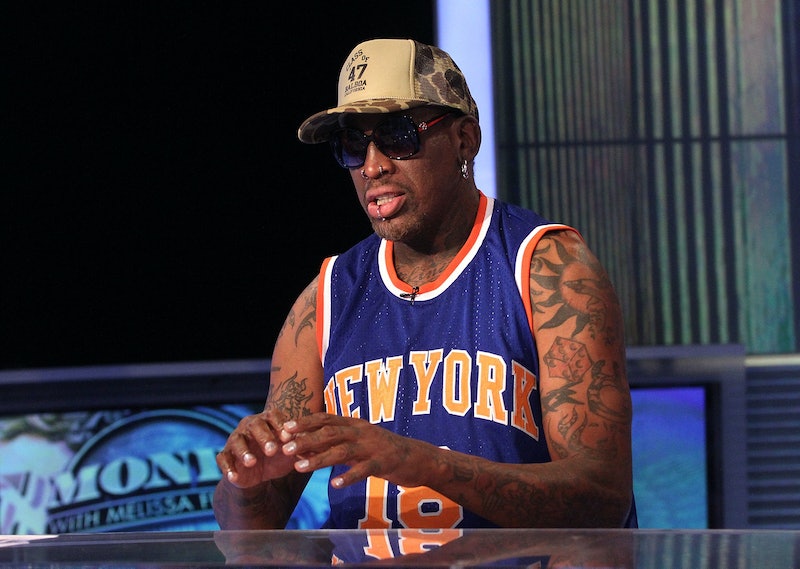 A former NBA player has featured prominently in discussions about North Korean-American diplomacy for many years — a concept that continues to fascinate many people. Indeed, as President Trump and North Korean leader Kim Jong Un kick off their second historic meeting, you may be wondering whether Dennis Rodman is going to the Hanoi summit. While the former basketball player did make an unofficial appearance in Singapore to honor Trump and Kim's first summit back in June, it's not yet clear whether he'll do the same in Vietnam.

Rodman and Kim have a relationship that dates back many years. As CNN reported in June 2018, Rodman has visited North Korea at least four times and has spent some significant one-on-one time with Kim. For example, Fox Sports reported that, during a 2013 exhibition basketball game that Rodman organized in North Korea, the former NBA player sat right alongside Kim — and told crowds at the event that that he was Kim's "friend for life." Rodman also joined Kim for dinner after the game, the outlet reported.

There hasn't been any word yet on whether Rodman will show his support for Kim by traveling to Vietnam this week, as he did in June for Kim's (and North Korea's) first-ever meeting with a sitting American president. Notably, Rodman was not officially invited to attend the first summit, The Hill noted President Trump told reporters on June 7. Though, the president also added, "I like him," when speaking about Rodman.

While he didn't receive a formal summit invite, Rodman traveled to Singapore after receiving sponsorship from the marijuana cryptocurrency company, PotCoin, the New York Times reported. In discussing the purpose behind the athlete's trip, Rodman's agent, Darren Prince, told CNN on June 10, "He is willing to offer his support for his friends, President Trump and Marshall Kim Jong Un." Rodman also offered heavy words of praise for the president in his own statement about his journey to Singapore. "To all Americans and the rest of the world I'm honored to call President Trump a friend," the former NBA player said (via CNN). "He's one of the best negotiators of all time and I'm looking forward to him adding to his historic success."

While in Singapore, Rodman conducted a live interview on CNN's Cuomo Prime Time. During this interview, the athlete became emotional when discussing the historic meeting, emphasizing that, in the past, many had criticized him for visiting the country due to its repressive leadership and abysmal human rights record. As Rodman put it (via CNN):

While it's not certain whether Rodman will travel to acknowledge Trump and Kim as they navigate their second summit, it seems pretty clear that he will at least be cheering them on in spirit, considering his history of supporting the two men. Indeed, this support seems to be mutual, as President Trump's secretary told Rodman back in June 2018 that Trump was "proud" of him for establishing ties with North Korea, the New York Times reported.