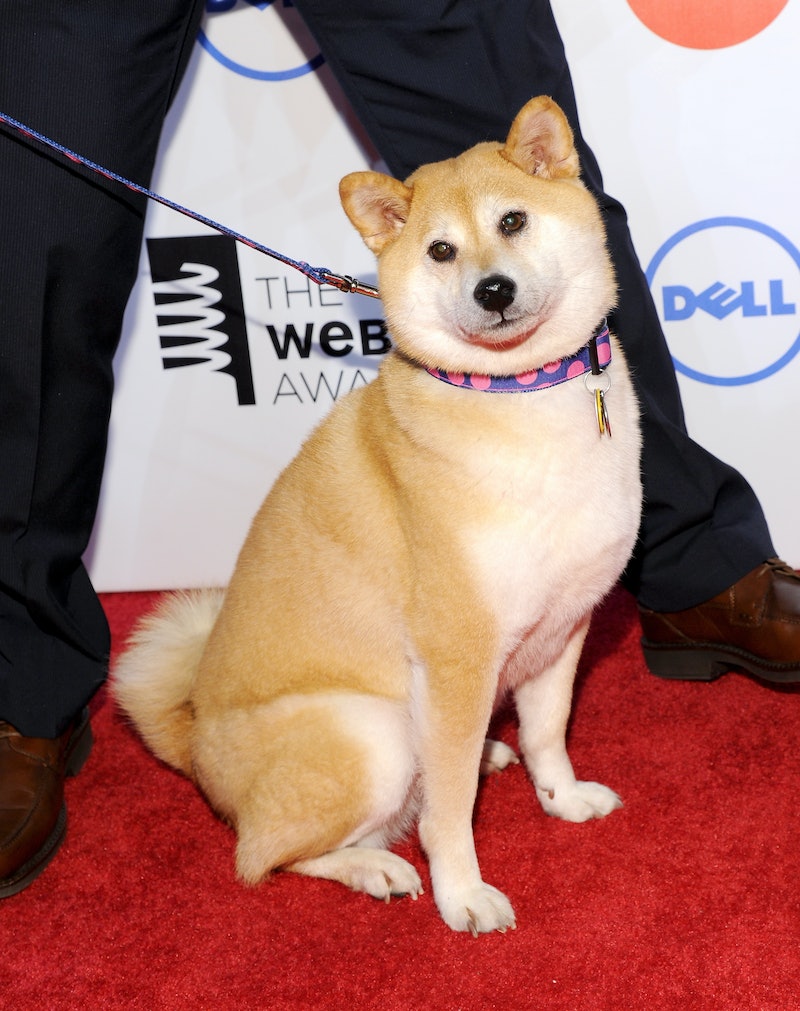 A shockingly long list of beloved celebrities passed away in 2016 and the beginning of 2017, and over the weekend, fans feared it was time to mourn yet again: On March 31, reports spread across social media that the furry meme dog known as Doge no longer walked this Earth, leading fans to cry out, "Is Doge dead? This no happen! Much sad." Happily, though, I can assuage your fears: Doge is very much alive; the canine simply became the subject of an April Fool's Day prank.

For those unaware of the power of Doge, the caramel Shiba Inu meme first arrived on the scene in 2010, when a Japanese school teacher uploaded pictures of her recently adopted pup named Kabosu to her blog. According to Know Your Meme, one of the photos in particular caught the eye of bloggers and began circulating in Reddit and Tumblr communities alongside the word "Doge" (slang for dog). The Doge meme most commonly showed some variation of the adorable Shiba Inu giving the camera some serious side-eye as grammatically-incorrect phrases written in colorful Comic Sans hovered about the frame signifying the pet's internal monologue.

As The Daily Dot points out, on March 31, 2017, the rumor of Doge's passing began with a tweet from the "official Twitter account of China Central Television (CCTV)." Written in English, the Tweet read "RIP, Doge! Shiba Inu who inspired popular Internet memes died in Japan aged 16," alongside several adorable pictures of the famous furball.

The post quickly went viral, with Twitter users mourning the pup-spiration of the now-classic meme alongside the trending hashtag "#RIPDoge." Though the Doge meme had already begun to lose steam around the time politicians began to use its styling in their social media campaigns in late 2013, the internet could not stand to lose the real thing; some even called it "the worst celebrity death of 2017." In the vernacular, plz no.

But before you go to the trouble of making a Doge tribute, I have some news for you: The beloved animal celebrity is actually very much alive! The scare was all part of an April Fool's prank. Such relief. So very delight! A post on Instagram and a follow-up blog post from Doge's human companion clarified the situation; indeed, it doesn't appear that Doge's human was even in on CCTV's Twitter prank, as the post states that they aren't sure how the misunderstanding got started.

This is by no means the first time the internet has feared Doge's passing. at least two Reddit threads have inquired as to the status of the Shiba in the past, and a little digging has revealed no change in the OG Doge's whereabouts. Currently, Doge is a healthy 11-year-old dog, living in Japan along her humans and several cats.

While the Doge death hoax was certainly insensitive, it managed to bring the internet together in its love of Doge — essentially resurrecting a long-dead meme. Much Easter. Good Doge.