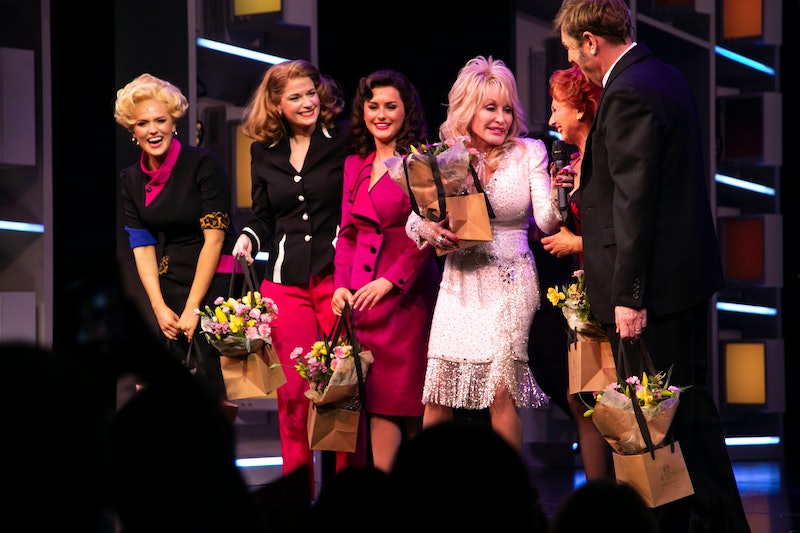 Following the success of the incredible 1980 blockbuster 9 to 5 Dolly Parton is back to present us with the musical version in the West End. In the film version Parton starred alongside the icons Jane Fonda and Lily Tomlin to bring us the ultimate feminist movie with the takedown of a misogynistic boss played by Dabney Coleman. And if that wasn't enough Parton has even more credits to her name because she not starred in the film but wrote both the music and the lyrics for the West End show, but is Dolly Parton in 9 to 5 the musical in London?

The country singing sensation was snapped with the cast of the show at its West End debut on Jan. 29. However, sadly for Dolly fans she won't be reprising her role as Doralee Rhodes. Gutted. But with country songs such as the classic hit "9 to 5" which won two Grammy's back in 1980 in the show she'll certainly be there in spirit.

After Louise Redknapp pulled out of the opening months of the show due to injury, the musical now stars Bonnie Langford as Roz, Caroline Sheen as Violet, Natalie McQueen as Doralee, and Love Island winner Amber Davies as Judy.

The trailer for the musical was released September 13th and it consists of Parton calling all the protagonists. Each actor sings a line in the trailer and boy oh boy Davies can sing, like really sing.

Parton told The Mirror she feels the show is making its West End debut at just the right time, especially in the wake of feminist movements such as #MeToo. At an event Parton said, "In a way, with the new #MeToo movement, I think this is a really good time for it, and that’s what really inspired them to actually come here to the West End to do it."

After all the story does centre around the sisterhood. Judy is forced to find a job after her husband leaves her, so she starts work as a secretary where she meets Violet, the senior office supervisor, secretary Doralee and misogynistic boss Franklin Hart Jr. who takes credit for Violet's ideas, shouts, and sexually harasses Doralee. The women form a sisterhood and work together to take down their boss. Parton told Sky News that she thinks the story is as "relevant" now as ever. "It brought up the subject again with harassment in the workplace and the fact that women are still not getting the chance to do as much as they can or get paid equal for the work that they do," she said. This film was truly ahead of its time.

The musical debuted in Los Angeles in 2008 and hit Broadway in 2009. Since then the show has come the UK twice, once for a UK tour 2012-13 and then again for the London Fringe back in 2017. But this will be the first time it has been at the West End, over its eight month residency at the Savoy Theatre. It's obvious that this show has been well received with Parton even nominated for a 2009 Grammy for best musical show album for 9 to 5 The Musical album.

Dolly Parton attended the premiere dressed to the nines as ever, with host of stars including Kylie Minogue, Luke Evans and Samira Mighty. Good news for reality TV fans, Amber Davies has not left the world of reality completely, she posted on her Instagram story with a photo of herself and Dolly Parton, with the caption "What a woman @dollyparton ❤️ Amber and Dolly 9 to 5 is coming to @itvbe at 9pm on the 27th of Feb". I, for one, cannot wait. And if you fancy seeing the West End show you can get tickets here.