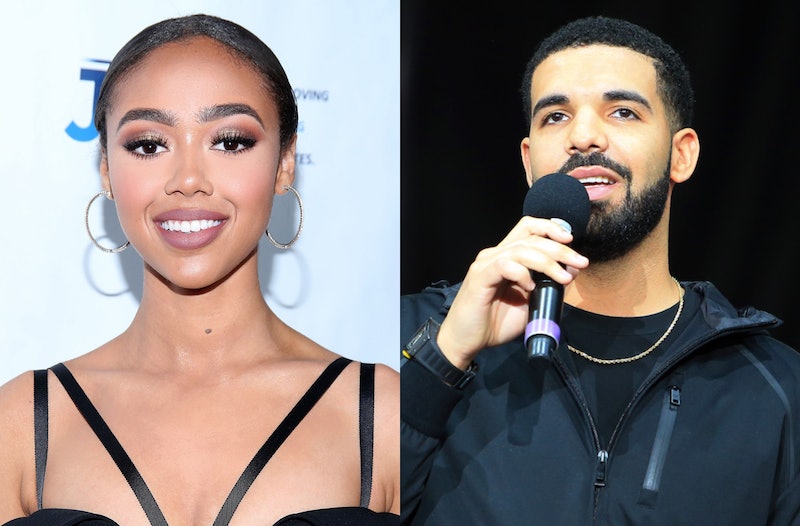 There may be a new woman in Drizzy's life, if a recent E! News report is any indication. Fans are likely wondering: Is Drake dating Bella Harris? After the pair sparked romance rumors in late August, a recent dinner date has only furthered speculation into their possible relationship. (Bustle has reached out to reps for Drake and Harris for comment.)

UPDATE: Later on Friday, TMZ reported that Drake and Harris did not go on a date. The news comes straight from Harris herself, who posted an Instagram clearing up the situation. She wrote:

"Coming off an amazing New York fashion week, I feel I need to set the record straight... I did not dine in DC recently. I was happily working & dining in NYC everyday."

EARLIER: According to E! News, Drake reportedly pulled a special move for his dinner date with Harris, an 18-year-old model. The 31-year-old rapper supposedly shut down the RPM Italian restaurant in Washington D.C. in order to have a private meal with his date on Sept. 10. By the way, the locale is simply to die for, with stunning decor and even better looking dishes. A source told the publication that the "Nice For What" singer waited until the restaurant had "cleared out" a bit before heading inside, with Harris following shortly after.

According to a source at Page Six, Drake and Harris were reportedly seen getting cozy at the Italian eatery. The publication also reported that they left separately at the end of the night. Following their get-together, they both attended the same restaurant again on Sept. 11 along with a group of friends.

Now, this very well could have just been a dinner date between two friends. But since Drake and Harris have been linked together romantically as of late, this outing only adds to the speculation surrounding this potential couple.

When did those romance rumors even start, though? Well, one of Harris' Instagram posts definitely sparked a bit of conversation. On Aug. 25, she posted a photo with Drake and wrote the caption, "no place I'd rather be." It may not be a smoking gun and point to a romantic relationship, but it is a rather interesting and sweet statement that she made.

E! News also noted that Drake and Harris may have known each other for way longer than people might've originally thought. According to yet another Instagram, their relationship goes back a couple of years. In her post, which was published in September 2016, the pair once again posed together for the camera. She captioned the photo, which was taken during the rapper's Summer Sixteen tour with Future, with, "night with this legend."

Neither Drake nor Harris have confirmed their relationship or even discussed it at all publicly. In the past, the "Nonstop" rapper was also particularly mum when it came to some other rumored relationships. Drake's actually been linked to a bunch of famous celebs, including, as she noted on The Ellen DeGeneres Show, Heidi Klum, even though that didn't exactly go anywhere. According to People, the singer's been linked to everyone from Nicki Minaj to Jennifer Lopez over the years. The publication also reported in May 2016 that he was "secretly dating" Rihanna. Although, things didn't last between them.

Now, it appears that Drake has a new woman in his life. But since their romance is only rumored at the moment, fans will just have to wait and see whether he ever comments on the state of his relationship with Harris.