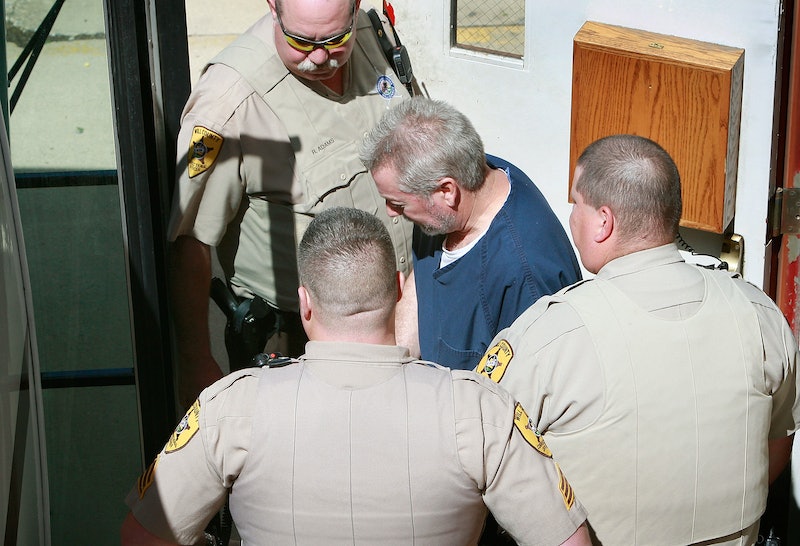 A criminal story that's long fascinated the public is that of Drew Peterson, who was convicted of murdering his third wife Kathleen Savio in 2012. But that's not the only case Peterson was suspected in or convicted of. And as his case gets re-examined in the REELZ special I Lived With A Killer, airing at 8 p.m. ET on Friday, Jan. 25, you'll want to know if Drew Peterson is still in jail in 2019.

According to USA Today, Savio's 2004 death was ruled an accident, but the case was re-opened after Peterson's fourth wife Stacy disappeared in 2007. Peterson has never been charged in connection to Stacy's presumed death, because her body hasn't been found, but USA Today reported that he has been considered a person of interest. According to the Chicago Tribune, as of March 2018, Stacy's sister Cassandra Cales was attempting to raise money via GoFundMe to continue her search for her sister's body. It's raised a little over $1500.

As far as Savio's murder, there was no physical evidence linking Peterson to Savio's death, but prosecutors used witness testimony to establish that Savio and Stacy were fearful of their husband. Per USA Today, several witnesses testified that Savio was in the process of getting a divorce when she died, and was openly fearful that Peterson would kill her.

Per USA Today, Peterson tried to appeal his conviction in 2017 under the grounds that the witness testimony was hearsay, but he was denied. In January 2018, his conviction was again upheld by an Illinois court, according to the New York Post. And in October 2018, the Supreme Court declined to hear his appeal, per WGN.

But Savio's murder isn't the only crime Peterson's been charged and convicted in. According to USA Today, after he was convicted in Savio's case and sentenced to 38 years in prison, he got another 40 year sentence in 2016 for attempting to hire someone to murder James Glasgow, the prosecutor on the Savio case. The Daily Beast reported that he was convicted thanks to an inmate informant who recorded their conversations about the topic.

After that incident, Peterson was relocated in 2017 from the Illinois prison system to a prison in Indiana, according to the Chicago Tribune. The outlet reported that officials worried he was a threat to those in corrections department because of his murder-for-hire plan to take out one of their colleagues.

Indiana inmate records report that Peterson is now being held at the high security United States Penitentiary in Terre Haute, Indiana along with about 1400 other male inmates. He is currently 65 years old and is up for parole on May 7, 2081. Of course, as that's over 60 years from now, Peterson will actually just spend the remainder of his life in prison. But after his conviction was upheld in early 2018, the New York Post reported that his lawyer pledged to "keep on appealing," so don't expect Peterson's name and case to fade from public attention any time soon.