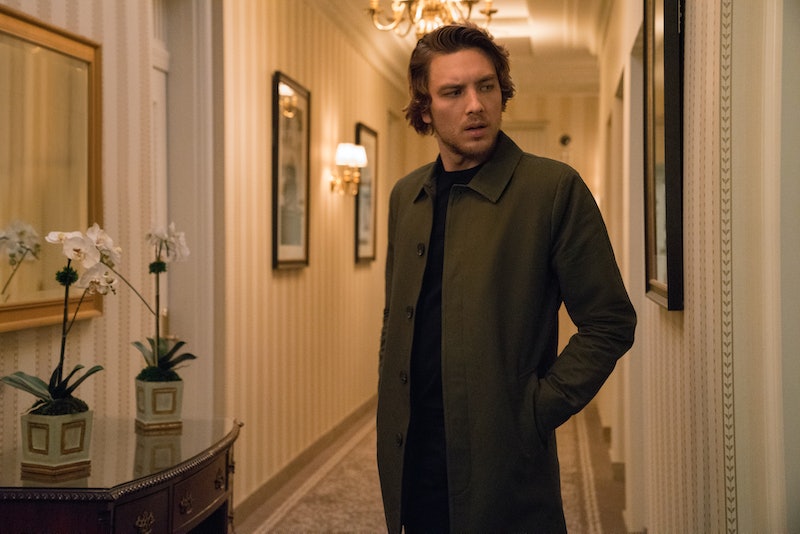 You're never too young to attempt to wrangle control away from those already in power. While House of Cards loses the corrupt influence of Frank Underwood in Season 6, the introduction of the Shepard family more than makes up for the character's absence. The youngest of the prominent Shepards introduced in Season 6, Duncan Shepard (played by Cody Fern) may not have the corporate power of his mother, Annette (Diane Lane), or his uncle, Bill (Greg Kinnear), but his ambitions suggest that he'll be using what power he does have for personal gain as soon as possible. Unique in power and goals, Duncan Shepard is not based on any real person, but he's representative of a legacy being left on American politics — a legacy in which corporate powers have just as much influence on the country as the politicians elected to run it.

SlashFilm.com reports that Duncan "represents the next generation of DC power players," meaning that he's not quite in power yet. Instead, the heir to the Shepard fortune is working alongside his mother and uncle as the Shepards try to gain control that they have been unable to gain through Claire Underwood, who has not been cooperating with the two. While most people may be willing to compromise with a family capable of digging up the corpse of a president, pulling the ring off of his finger, and leaving it on the bed of the current president who is the dead president's widow (of course that happens this season), Claire Underwood is not one to compromise.

It's unclear how Duncan's story will play out through the final season of House Of Cards, but actor Cody Fern has revealed one important detail about his character to Entertainment Tonight — Duncan Shepard is not a good guy.

Of course, as Fern points out to Entertainment Tonight, "No one's a good guy on this show!" However, beyond that, he was unable to provide additional details about what fans can expect from the young up-and-comer. "It's even under wraps for the cast. We find out right before we're shooting what's happening. So, everything is a surprise and it's, every moment in House of Cards is anew."

Fern is finishing up a pretty prolific year on House Of Cards, and all of projects seem to share a common theme. Fern played David Madson on The Assassination Of Gianni Versace: American Crime Story and portrays Michael Langdon on American Horror Story: Apocalypse. Considering that House Of Cards is a story set in America filled with both crime and its own brand of political horror, Fern is a perfect fit for the cast.

Claire states in House Of Cards that the "reign of the middle-aged white man is over," but that doesn't mean she's free from the crosshairs of young white men like Duncan Shepard. While he may not be the most immediate threat to Claire's livelihood, it's likely that fans will see him get his hands dirty before the end of the series comes to an end once and for all.