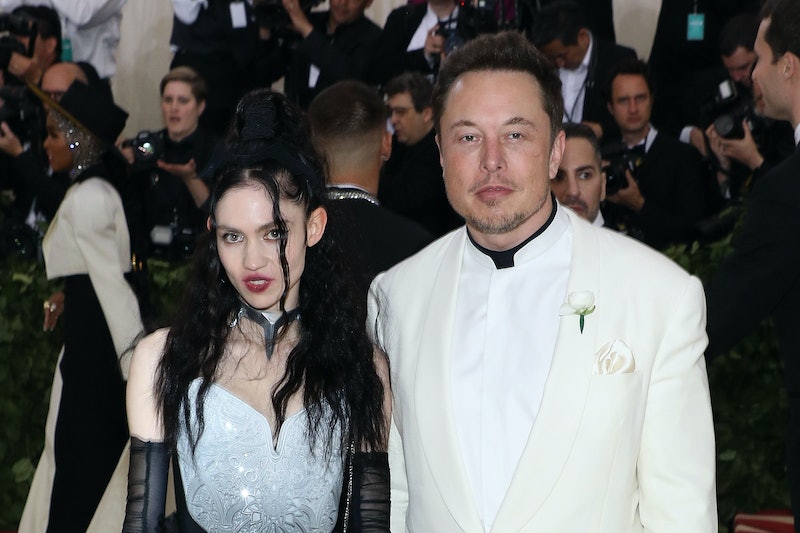 May the force be with Grimes and Elon Musk, who welcomed their first child on Thursday, May 4, better known as Star Wars Day (how on-brand for them). Twitter immediately exploded with excitement, which quickly turned into confusion when it was revealed that Musk and Grimes reportedly named their son X Æ A-12 Musk. The Tesla founder confirmed the odd moniker on Twitter, and while there's a good chance that Musk is trolling everyone, it didn't stop people from trying to decipher what the name means.

If the name X Æ A-12 is accurate, there are several different possible pronunciations. You could just say it phonetically, meaning his name would literally be "X A-E A-twelve." It sounds more like the model number of a robot prototype than the name of a human child, which definitely wouldn't be out of character for the couple. However, the name likely has a deeper meaning than expected.

Musk liked a tweet speculating that X Æ A-12 was pronounced "X Ash Archangel." Æ is a Latin ligature of the letters "a" and "e" that is still used in some languages today, but in early English, it translates to "ash." A-12 could refer to a specific type of aircraft, the Lockheed A-12, which had the internal code name of "Archangel." This would make sense given Musk's fascination with anything automotive and aviation-related. Plus, "Archangel" bears a striking resemblance to the title of Grimes' 2015 album Art Angels, which would give the name a special meaning for her as well.

The X could literally mean anything — the Roman numeral for ten, a nod to Tesla's Model X vehicle, or even as one Twitter user speculated, Genesis, which is also the name of a Grimes song. It could be all of the above, or Musk and Grimes just thought X was a cool letter to start a name. Regardless, the name is puzzling everyone — and spawning endless memes. Did you expect any less from the Internet?

However, even if Musk and Grimes decided to have their son go by X Æ A-12, it's highly unlikely that it's his legal name. The Birth Registration Handbook of California, where Grimes gave birth, says that only letters can be used in a child's first name. Even diacritical marks, like the "é" used in Beyoncé, aren't allowed, yet alone numbers and dashes. So unless Musk was able to circumvent the rules, X Æ A-12 Musk is not their son's legal name, even if that's his name in their hearts.

This leaves us with either two scenarios: Musk is simply trolling fans, which Grimes is probably getting a kick out of, or X Æ A-12 is truly what they want to call their son — it just might not be pronounced exactly how it's spelled. It would line up with the tech-y baby name ideas that were used in memes when Grimes' pregnancy was announced, which she said were "annoyingly on point" in an interview with The Face.

But since he can't be named X Æ A-12 legally, the only fitting conclusion for this bizarre yet entertaining saga would be for his legal name to be something extremely common like Joe or Bill. Now those are names we wouldn't expect for Musk and Grimes' child.