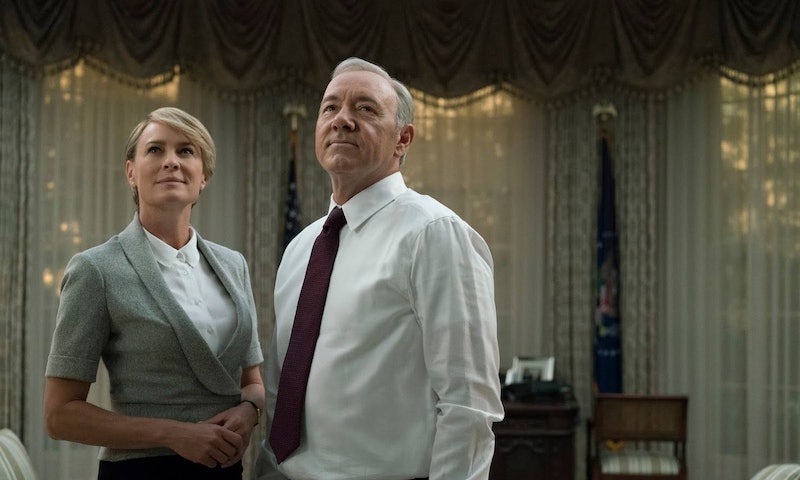 House of Cards Season 5 premiered on Netflix on May 30 and expands on the show's cynical view of politics and power. And how much power you have often depends on the other influential people you have access to. (Spoiler alert for House of Cards Season 5 through Episode 8!) In Episode 8 of the new season, Frank goes on an outdoor retreat with a secret society called Elysian Fields, where only powerful men are welcome. If it's important enough for Frank to participate in, then it must be a big deal. So, is Elysian Fields a real secret society for D.C. decision-makers?

Well, from what I have gathered, Elysian Fields is not a real secret society. Though, perhaps it's so secret that there's no information about it on the internet. In which case, House of Cards just blew up its spot. But that's very unlikely.

According to Britannica.com, however, the name of Frank's secret society can be traced back to Greek mythology. "Elysian Fields" is said to be a true paradise where gods who are gifted immortality are sent. Basically, only the most favored gods got to go to this place and live out their endless lives in bliss. This is especially fitting for a reference point because on House of Cards, Elysian Fields is essentially a place for important men (and only men) to hang out together in the woods.

Now, though there doesn't appear to be a secret society that goes by the name of Elysian Fields, there is no lack of very similar-themed membership groups that are allegedly active today.

A secret society with a similar moniker, Bohemian Grove, is the source of much conspiracy and myth. According to Vanity Fair, this secret society holds its gatherings at a 2,700-acre campground in Monte Rio, California, among the redwoods. Its members include "every Republican president since Coolidge," according to the publication, plus other political big shots, mostly male, conservative, and white. The list of alleged activities posted by Vanity Fair include campfire discussions, concerts, and something to do with an "owl shrine." The article also reports that the quickest way to join up is to be sponsored by more than one member; otherwise, prospectives have a long wait ahead of them. There's also allegedly a $25,000 buy-in and annual dues.

The Washington Post claims that a Bohemian Grove motto is "Weaving Spiders Come Not Here," which is very similar to the Elysian Fields motto, "Buzzing Bees Do Not Sting Here." Both mean that the retreats aren't for doing business, though the Post alleges that The Manhattan Project — aka the program that would develop the first nuclear weapons — was hashed out on site. And of course, the retreat enables power players to make in-roads with one another, which certainly play out later in the political sphere. That's why the makeup of them is so important.

Bohemian Grove has piqued the interest of many, resulting in individuals like Infowars' Alex Jones and Spy Magazine writer Philip Weiss "infiltrating" the gathering, according to the same Washington Post piece. Jones posted a video shot at the campground in 2000, depicting a ritual where the members set fire to a coffin effigy in front of the aforementioned owl statue. It's like something right out of House of Cards. A spokesman for the event affirmed the validity of the footage and called the gathering a "traditional musical drama celebrating nature and summertime."

From the similarities in their membership demographics to their locations, purposes, and mottos, it certainly seems that Elysian Fields from House of Cards is inspired in part by the mysterious Bohemian Grove event.