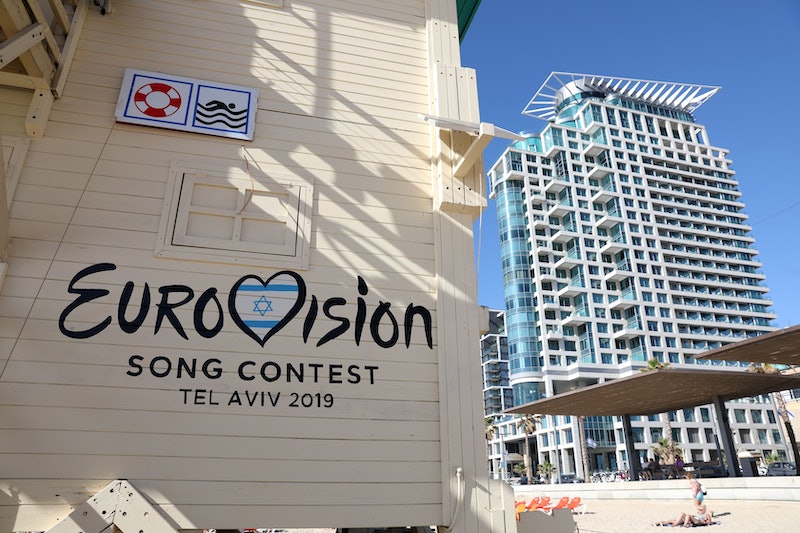 ABIR SULTAN/EPA-EFE/Shutterstock
By Sophie McEvoy
May 18, 2019

When Eurovision comes around, it's often a chance for many to relish in the talent (and absurdity) of what music from different parts of the world has to offer. While I'm sure that the UK is totally prepared for another round of iconic Graham Norton commentary clapbacks, this time around it seems the contest is slightly more controversial than last year due to it being held in Israel. I don't know about you, but this all this has got me wondering... is Eurovision political?

Since Eurovision began in 1956, the song contest has been promoted as an "apolitical" event, one which is meant to unite the countries through music. As it states in the official rules for the contest, Eurovision "is a non-political event" and "all Participating Broadcasters, including the Host Broadcaster, shall ensure that all necessary steps are undertaken within their respective Delegations and teams in order to make sure that the ESC [Eurovision Song Contest] shall in no case be politicised and/or instrumentalised."

It also states that "[n]o lyrics, speeches, gestures of a political, commercial, or similar nature shall be permitted during the ESC." But as Politico reports, there have been plenty of moments throughout the history of the competition where contestants have addressed current political issues. You only have to listen to Ukraine's entry in 2016 (which beat Russia and Austria to the top spot) to hear the political undertones. According to Politico, their song '1944' was a reference "Stalin's enforced wartime deportation of Tartar people to barren Central Asia."

When you have a contest with a bunch of nations competing against each other, it's not hard to see political tensions arise even if the focus is meant to be on something much more unifying. "Certainly, the origins of the Eurovision Song Contest are apolitical — initially it was about putting on a simultaneous television program across Europe," history professor Dean Vuletic said in a recent interview with ABC News. "But from its very inception the contest has been a stage for governments and contestants to signal rivalries, make statements and send messages."

After Netta Barzilai won last year for Israel, the prospect of Eurovision being hosted in the country's capital Tel Aviv has been a topic of conversation. Several artists including Wolf Alice and Brian Eno have endorsed the Boycott, Divestment and Sanctions (BDS) movement, "which wants a complete cultural boycott of Israel over its treatment of Palestinians," BBC reports.

"This is the most controversial Eurovision Song Contest that's ever happened," Wolf Alice guitarist Joff Odie told BBC. "The boycott is like any grassroots movement. Instead of feeling disempowered, we can feel empowered."

In contrast, celebrities such as Stephen Fry and Sharon Osbourne have signed a statement put forth by non-profit Creative Community For Peace in support of Eurovision 2019, as Sky News reports. "We believe the cultural boycott movement is an affront to both Palestinians and Israelis who are working to advance peace through compromise, exchange, and mutual recognition," the statement read. "While we all may have differing opinions on the Israeli-Palestinian conflict and the best path to peace, we agree that a cultural boycott is not the answer."

As of now, with two days to go until the contest's grand final, none of the 41 countries have pulled out of the competition "as a direct result of the contest being held in Israel," the BBC reports.

More like this
Why Eurovision 2023's Host City Won’t Be Revealed For A While Yet
By Sam Ramsden and Rachel Mantock
A Political Thriller Inspired By The Munich Massacre Is Coming Soon
By Darshita Goyal
The Sean Bean Intimacy Coordinator Controversy, Explained
By Sam Ramsden
Ezra Miller Apologises To Everyone "Alarmed & Upset" By Their Behaviour
By Sophie McEvoy
Get The Very Best Of Bustle/UK