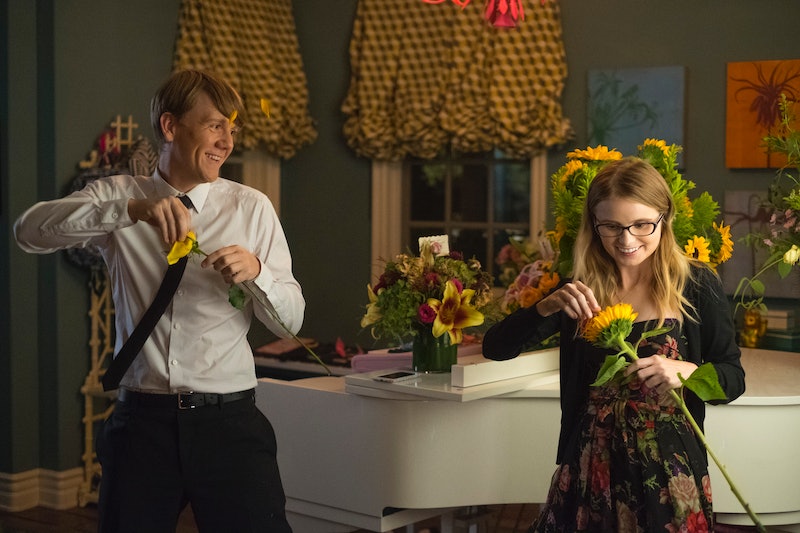 From the maker of Please Like Me comes his new dramedy, Everything's Gonna Be Okay, which premieres Thursday, Jan. 16 on Freeform. Creator Josh Thomas stars as Nicholas, the unlikely guardian to his two half sisters after their dad passes away from cancer. But while his previous show was semi-autobiographical, Thomas told the New York Post that Everything's Gonna Be Okay is not based on a true story.

However, that doesn't mean there aren't real-to-life elements. "There's a couple of boyfriend scenes that are based on my life — usually if I'm fighting with some boy on TV, it's me getting to rewrite some past fight to make my points more articulately," Thomas told the Post. "My character's gay because I'm not going to go onscreen and kiss a girl. Yucky, nobody wants to see me do that!"

The other true component in Thomas's Freeform dramedy is Matilda (Kayla Cromer), who has high-functioning autism. The TV creator was compelled to write her character after watching a documentary called Autism and Love. "Autism is so much more common now than it used to be, and it's crazy that girls with autism aren't represented on TV," Thomas told the Post. "There are literally zero. I feel like we should have that. So I went and did it."

Indeed, current examples include Sam Gardner from Atypical and The Good Doctor's Shaun Murphy (Freddie Highmore). There are four autistic boys for every girl, according to Autism Speaks, which is perhaps why there are so many more men on the spectrum depicted in pop culture. But in addition to them both being men, neither of these actors are actually autistic, though Everything's Gonna Be Okay actor Kayla Cromer is.

"The team [was] seeking an actress on the spectrum to cast. So, they were all aware of my differences from the start," Cromer told The Hill. "We often discussed scenes in pre-production meetings, even did re-writes where my quirks were written in. It's all about teamwork, and I loved bringing their vision of Matilda to life."

Although the actor has had a handful of other roles, her Freeform character is Cromer's first big break. "Matilda is learning to navigate life in a neurotypical world," she continued in the same interview. "She is inexperienced in dating and relationships. She is more open with her autism, where I was still learning to advocate for myself. She gets overwhelmed in situations with crowds and noises, or confusing moments."

But while much of the show's plot isn't based on real life, it feels grounded. "The first thing we go for is realism. It's my number one thing," Thomas told the Post. "If I have a friend who has a parent die, we try and make the day lighter. In real life, most people try and cheer each other up [and] that's what we're trying to do with the comedy in the show. The hope is that people see on TV storylines that are similar to things going on in their life, and they're like 'I'm not alone in this.'"

More like this
ITV's 'Maternal' Was Inspired By A Very Simple – & Unanswerable – Question
By Maxine Harrison
Ozzie’s Coming Out Scene With Kitty On 'That ’90s Show' Has Twitter Sobbing
By Brad Witter
Shonda Rhimes Responded To The Surprise Exit Of A Day 1 'Grey's Anatomy' Figure
By Grace Wehniainen
Everything To Know About A Potential 'Lockwood & Co.' Season 2
By Gretchen Smail
Get Even More From Bustle — Sign Up For The Newsletter
From hair trends to relationship advice, our daily newsletter has everything you need to sound like a person who’s on TikTok, even if you aren’t.