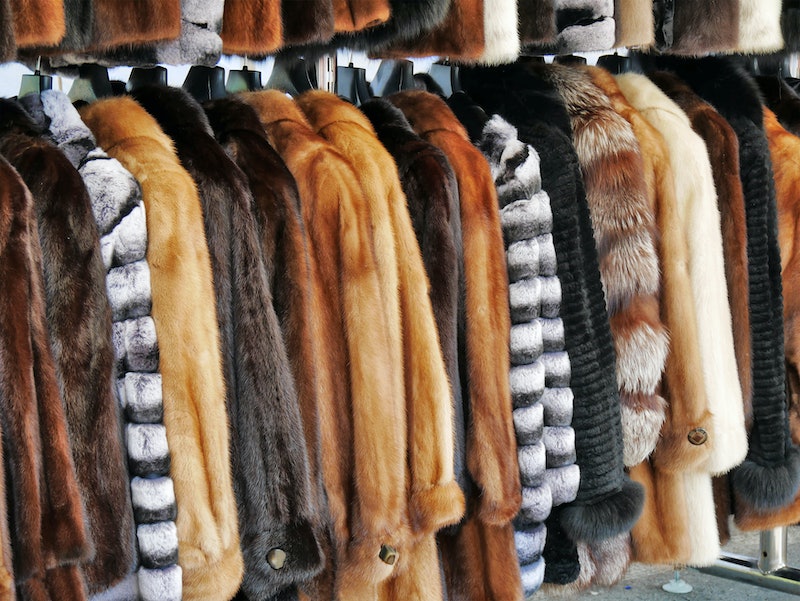 Take a look at your winter wardrobe. Is it full of fluffy, furry garms? With the British weather feeling chillier year on year, the likely answer is "yes". In the majority of cases, not one of those items will be made from real fur; adorning oneself in the coat of a dead animal is abhorrent to many. But there are concerns that the fake version isn't as good for the plant as previously thought. So is faux fur bad for the environment, or is there a cosy answer to this conundrum?

The upsides of faux fur

Faux fur has long been thought of as an ethical alternative to the real thing. And, for the most part, it is. When you buy faux, for the most part you know no animal has been harmed, although there have been some notable cases where fur that was sold as fake turned out to be real. Animals living on fur farms spend their time locked up in small cages and can be tortured or cruelly killed, states PETA. (Some farms are regulated by welfare programmes such as Welfur, but several countries have banned them.)

Turning real fur into coats and other products is also detrimental to the environment as well as the welfare of living creatures. As the Fur Free Alliance notes, a report by research organisation CE Delft found producing one kilogram of mink fur results in around 110kg of carbon dioxide emissions. Its contribution to climate change is five times greater than that of wool, which itself has been shown to be contributing significantly to climate change in tests. In fact, fur has a more harmful impact than textiles on 17 of the 18 environmental areas that are used to assess the sustainability of its life cycle. (However, in the case of mink fur, this may have something to do with the amount of food the animals eat.)

“Real fur is also treated with a whole host of chemicals, many of which are toxic and associated with health risks,” Yvonne Taylor, PETA's director of corporate projects told Glamour. “There’s formaldehyde, which is linked to leukaemia, and hexavalent chromium, which is also linked to cancer."

Opting for faux fur should eliminate the animal welfare issue. But it doesn't remove the planetary impact, especially when bought for a low cost. Popularised in the 1950s, per Fashionista, fake fur tended to be created by chemical companies. And there lies the still-existent problem.

Today's faux fabric is made up of synthetic fibres; many, including acrylic and polyester, are forms of plastic, notes Harper's Bazaar. “Acrylic had the worst environmental impact of nine fibres studied in a 2014 report by the European Commission,” Mina Jugovic from the Centre for Sustainable Fashion explained to Glamour.

Polluting petroleum-based products also tend to be included in the composition. Unlike real fur — which will eventually biodegrade, per Refinery29 — faux fur fibres could take hundreds of years to break down. In the meantime, it's likely to take up space on landfill sites.

And when faux fur garments are washed, microfibres may leak into the water system. In a 2018 report by environmental organisation Friends of the Earth, synthetic clothing was named one of the leading sources of UK microplastic pollution.

Julian Kirby, the organisation's plastics campaigner, told the Guardian: “Microplastic pollution may be largely invisible, but it’s having a potentially devastating effect on our natural environment — especially as it can be mistaken for food by some our smallest ocean creatures, which are then eaten by bigger creatures as part of the food chain."

Where do we go from here?

Look at it from the animal point of view, and it's clear that faux is the way to go. But if full planetary impact is taken into account, the fake stuff could be highly damaging. (Much research into the topic has been commissioned by organisations with a clear agenda, as Dazed explains, making it difficult to conclude which fur type is worse.)

Real fur campaigners believe it's the more sustainable route to go down. The other side says there is no need to involve animals in the furry part of the clothing business. For some, real fur will never be an option. Others, however, are investing in fur products that already exist. Vintage coats — one option — ensure no further animals are hurt while prolonging the life cycle of a design.

But technology is also opening up a world of possibilities. Brands are dipping into bio-based fibres; over a third of EcoPel's Koba fur is made up of plant-based ingredients, for example. As Esquire reports, natural elements such as collagen are now being grown in labs, but it could be some time before they're introduced to the commercial market. Similarly, with 3D-printed hairs that could be almost identical to the real thing.

Of course, if you can't bear to wait, there's still the option of buying faux fur. But do your research on brands' production processes. This includes looking at not just how it's made, but who's making it and what's likely to happen at the end of its lifetime.

You can easily help with the latter part. Only buy items you're going to wear again and again and, if you do fall out of love, sell it on or donate to charity rather than consigning it to the bin. As Stella McCartney says of its acclaimed fur-free fur: "We encourage customers to care for their items and be responsible with their garments, never throwing them away."

More like this
How To Shop Your Favourite Celebrities’ Closets On Depop
By Darshita Goyal
Dr. Martens’ New Collab Reimagines A DM Classic
By Frances Stewart
Harry Styles’ Red Carpet Looks Have One Thing In Common
By El Hunt
Pandora’s New Collection Is A Real Work Of Art
By El Hunt
Get The Very Best Of Bustle/UK