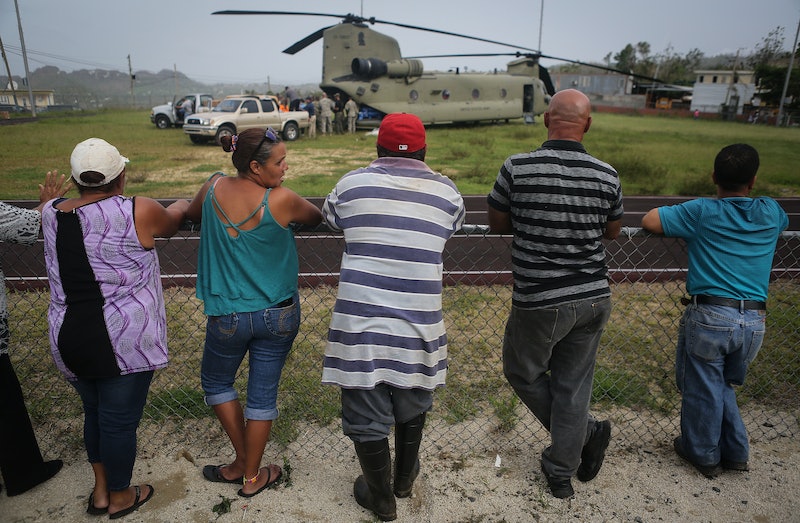 Despite earlier reports to the contrary, it looks like FEMA won't cut off aid to Puerto Rico by the end of the week after all. Many were alarmed on Monday when NPR and CNN reported that the hurricane-stricken island would stop receiving food and water supplies from the the agency by Wednesday. Now however, FEMA says that this was a miscommunication, and that Puerto Rico will in fact continue to receive FEMA aid.

“This aid is not stopping,” William Booher, a spokesperson for the agency, told the New York Times. “There was no, and is no, current plan to stop providing these commodities, as long as there continues to be an identified need for them.”

FEMA's director in Puerto Rico, Alejandro De La Campa, had directly told NPR that the agency would stop providing aid by Wednesday, while CNN, quoting an anonymous agency official, separately reported the same on Tuesday. The Puerto Rican government appeared caught off-guard, with State Coordinating Officer Héctor M. Pesquera saying in a statement that "we were not informed that supplies would stop arriving, nor did the Government of Puerto Rico authorize this action."

But on Wednesday, the agency released a statement clarifying that "FEMA and the Commonwealth of Puerto Rico are not stopping the provision of commodities after Hurricane Maria."

"FEMA and the Commonwealth will continue to provide commodities to voluntary organizations and local officials who still have a need,” the FEMA statement read.

Booher told NPR that the Wednesday date "was mistakenly provided" to media outlets by the agency as the cutoff date. What the agency did plan to do, according to Booher, was hold an internal evaluation on Wednesday to determine whether or not Puerto Rico still required emergency aid. He added that FEMA would have been required to give notice to the Puerto Rican government if it was going to stop providing aid.

On Wednesday, the Puerto Rican government said it had told by FEMA that the island will continue receiving food and water.

"We immediately established communication with FEMA’s operations coordinator for Puerto Rico, Mike Byrne, to clarify the situation [after the NPR report]," read the statement, which was provided to the New York Daily News. "After the conversation, both teams agree that at no time has it been agreed to begin with the transfer of FEMA responsibilities to the Government of Puerto Rico as part of the transition process from the response phase to the recovery phase."

So far, FEMA has delivered more than $1.6 billion in food and $361 million in water to the island, according to CNN. But the country's recovery efforts still have a long way to go. In addition, the agency has provided $259 million in financial aid to rebuild infrastructure that was destroyed in the storm and provide housing for displaced residents.

Four months after being battered by Hurricane Maria, one third of the island's 3.4 million residents still don't have electricity, according to NPR. San Juan Mayor Carmen Yulín Cruz said Tuesday that some schools outside the city have no water or power, and the island's governor, Ricardo Rosselló, estimated that the cost of rebuilding the country's electric grid and other infrastructure will surpass $90 billion.

Puerto Ricans have responded to the damage in a number of ways. There's been a mass exodus from the island to Florida, with between 50,000 and 300,000 Puerto Ricans moving to the Sunshine State since the storm. Rosselló, meanwhile, announced a plan in January to privatize the country's public power company, explaining that "the Puerto Rico Electric Power Authority does not work and cannot continue to operate like this."

During his State of the Union address Tuesday, President Trump said that "we love" Puerto Rico. But his administration has been criticized for its response to the disaster on multiple fronts, most recently when it decided not disburse a planned $4.9 billion loan to Puerto Rico after learning that the island already had a $1.5 billion cash reserve on hand.