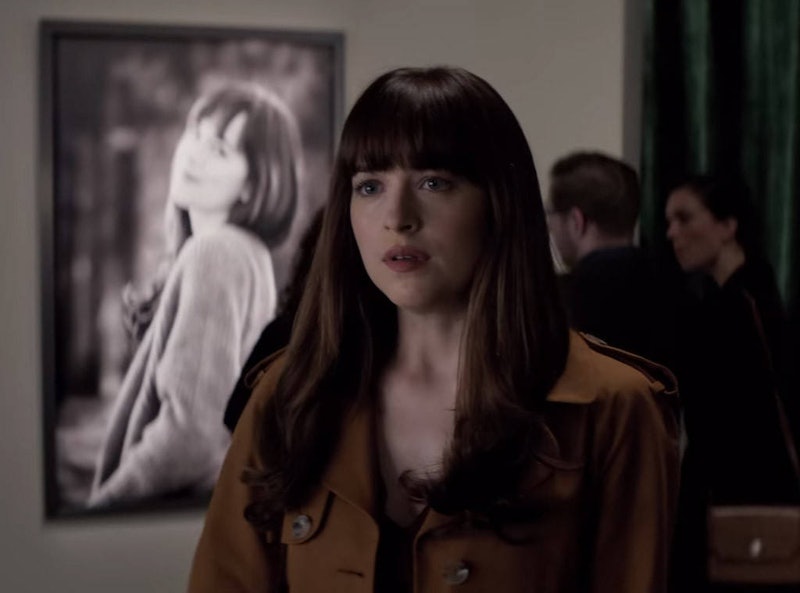 About two-thirds of the way through Fifty Shades Darker, Anastasia Steele walks in on Christian Grey working out in his home gym. She stands in the door gazing on approvingly as he does pull-ups, and then (somehow without noticing that she is standing right in front of him), Christian places his hand on the end of a pommel horse and slowly pushes himself up higher and higher until his body is hanging in mid-air looking like a more impressive, more muscular version of that planking trend from a couple years ago. I'd been asking myself an important question about the movie even before I started watching it, "Is Fifty Shades Darker self-aware?" but it was during the pommel horse scene that the question screamed much, much louder in my mind.

I don't know why anything in this movie happened. Of course, the plot is based on the books, but when it comes to situations that were specific to the film — like the way lines were delivered or shots were framed or how a character told another character she had a cup of tea for her but then oddly didn't hand it to her — I really couldn't tell if the filmmakers were "in on it." Was all of this meant to be taken seriously, or is there a behind-the-scenes awareness of the insanity? The fact that I really have no idea is the thing that I enjoyed most about this movie.

That said, this movie isn't good — at least not in the traditional sense. But it is incredibly bad-good — like, the highest level of bad-good — which is what I expected from Fifty Shades of Grey when I saw it only to find that it was just bad-boring. Fifty Shades Darker made me laugh out loud numerous times, scream at one particularly shocking moment, make Chrissy Teigen face at the screen, and say, "Ugh, I hate this" aloud more than once. But I didn't hate Fifty Shades Darker. In fact, I enjoyed the experience and will not stop talking about this movie to anyone who will listen. (Much like I will also talk to anyone about The Lake House, which is bad-good fave of mine. Side note: please talk to me about The Lake House.)

While the pommel horse scene was a turning point for me, there were many, many instances before and (mostly) after that scene that led me to believe that the filmmakers might be in on the joke — and then immediately made me question myself once again. Let's take a look.

Batting for Team Self-aware are a series of small moments that happened during my two hours with Mr. Grey. Here are the major hitters:

All of these moments got laughs from the audience at my screening and it is very hard to convince myself that they weren't meant to. I mean, you don't accidentally put a Chronicles of Riddick poster behind Christian's head while he's telling Ana about his dead mom who is part of the reason he's attracted to her because he likes to punish women who look like his dead mom...

Whoo boy, let's just dive right into the reasons it might not be self-aware, shall we?

If the thing about his dead mother wasn't hint enough, the main reason I think this movie might not have been as self-aware as the above listed moments suggest is that the subject matter is so heavy that it would be strange to surround it with purposely out-there moments. This movie includes:

Plus, there were moments that were clearly not meant to be tongue-in-cheek that weren't handled great either. Can we talk about Christian "I'm Learning To Be Not As Controlling" Grey saying that he and Ana would pick out her engagement ring together and then him surprising her with one anyway? Why didn't the movie let this moment sum up the progress they made? Why?

On top of that, this movie is based on a series of books that are extremely popular, so it would be somewhat alienating to those who are serious fans of the books to make a mockery of them. And, more importantly, the Fifty Shades Darker script was written by Fifty Shades author EL James' husband, Niall Leonard. I would imagine that he wouldn't purposely include anything that would poke fun at the story itself. Then again, he isn't the one who would be responsible for something like that Chronicles of Riddick poster, so there's a lot of moving pieces here that could have lead to some of these more riddick-ulous (kill me now) moments if they were, in fact, meant to be riddick-ulous (I'm still breathing).

In the end, I'm leaning towards the movie not being as self-aware as some of the scenes will make you hope it is, but I also think we're better off not knowing for sure. Whether the movie was purposely bad-good or accidentally bad-good, when it comes to a bad-good movie the best part is the full event, the talking everything out afterward. The subway ride another Bustle editor and I took home after, the text messages we sent once we got back to our respective apartments, and the wine-fueled rant I went on to my boyfriend (who had not even seen the movie) were the parts that made the experience so entertaining.

Like Ana not knowing what those silver balls were for (you'll see...), there's an intrigue that comes with the unknown. Personally, I felt that Fifty Shades of Grey failed me as someone who was seeing it purely out of curiosity and an unquenchable thirst for kitschy movies. And if you're like me, and the two-year break between the first and second film made you curious once again, see this movie. And then consider getting Dakota Johnson bangs. And then complain about Ana and Christian's relationship being incredibly unhealthy for days afterward. I'm telling you, the price-per-wear of this thing is incredible.