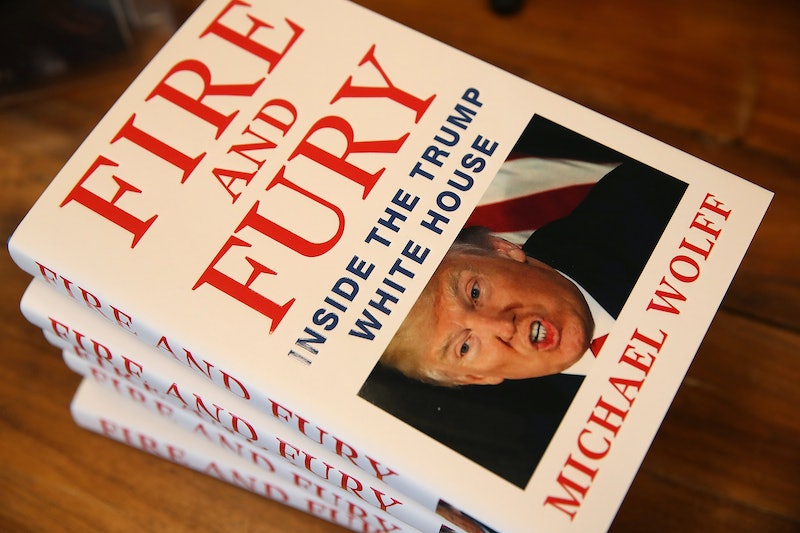 The release of Fire and Fury: Inside The Trump White House, has made plenty of headlines for the explosive claims about Trump's White House from author Michael Wolff. Over the course of the past week, some may have wondered just how true Wolff's Fire and Fury book about Trump actually is.

For starters, Wolff's work has long been criticized by his peers. As Fire and Fury started making headlines for its salacious details, many journalists renewed longstanding questions about Wolff's ethics and methods.

“I wonder how many [White House] staff told Wolff things off the record that he then used on the record,” Bloomberg View columnist Joe Nocera tweeted. “He’s never much cared about burning sources. Can’t imagine that many of those quotes were meant for publication.” Wolff has also been roundly criticized for admitting that he was willing to say whatever "necessary" to get access to the White House.

While many people have pointed out that Trump's general behavior as described in Fire and Fury comes as no surprise, this is not the first time Wolff's reporting has come under fire. In 2008, late journalist David Carr criticized Wolff's book about Rupert Murdoch for factual errors. “Historically, one of the problems with Wolff’s omniscience is that while he may know all, he gets some of it wrong,” Carr wrote in a New York Times review of his book.

In a 2004 profile of Wolff for The New Republic, Michelle Cottle described Wolff's reporting as "springing from his imagination rather than from actual knowledge of events" and that he "absorbs the atmosphere and gossip swirling around him at cocktail parties."

Over the course of 18 months, Wolff claimed he conducted more than 200 interviews with Trump and senior staff members for this book. Wolff wrote in an article for The Hollywood Reporter that it was actually Trump's lack of disapproval that gave him fly-on-the-wall coverage:

Since the new White House was often uncertain about what the president meant or did not mean in any given utterance, his non-disapproval became a kind of passport for me to hang around — checking in each week at the Hay-Adams hotel, making appointments with various senior staffers who put my name in the ‘system,’ and then wandering across the street to the White House and plunking myself down, day after day, on a West Wing couch.

Some of his sources for Fire and Fury, Wolff claimed, spoke to him on "deep background," which he described as " a convention of contemporary political books that allows for a disembodied description of events provided by an unnamed witness to them."

As excerpts from the book made headlines, Trump's lawyers issued a cease and desist letter over "false and baseless" statements about the president, and tried to prevent its release. White House Press Secretary Sarah Huckabee Sanders has also bashed the book, saying it was filled with "false and misleading accounts" and dismissing it as "trashy tabloid fiction."

Trump himself has claimed in a tweet that he didn't authorize Wolff's access to the White House. "I never spoke to him for book," he tweeted. "Full of lies, misrepresentations and sources that don’t exist."

At the Friday White House press briefing, however, Sanders acknowledged that Trump did speak with Wolff, though only briefly. Wolff, on the other hand, said that he spent three hours with Trump during the campaign.

"Whether he realized it was an interview or not, I don’t know, but it certainly was not off the record," Wolff said in an NBC interview. "I spoke to him after the inauguration, yes. And I had spoken to, I mean I spent about three hours with the president over the course of the campaign and in the White House, so my window into Donald Trump is pretty significant."

Given the questions surrounding Wolff's ethics and methods, you might be better off reading this one, as Jeet Heer wrote in The New Republic, "with suspicion."