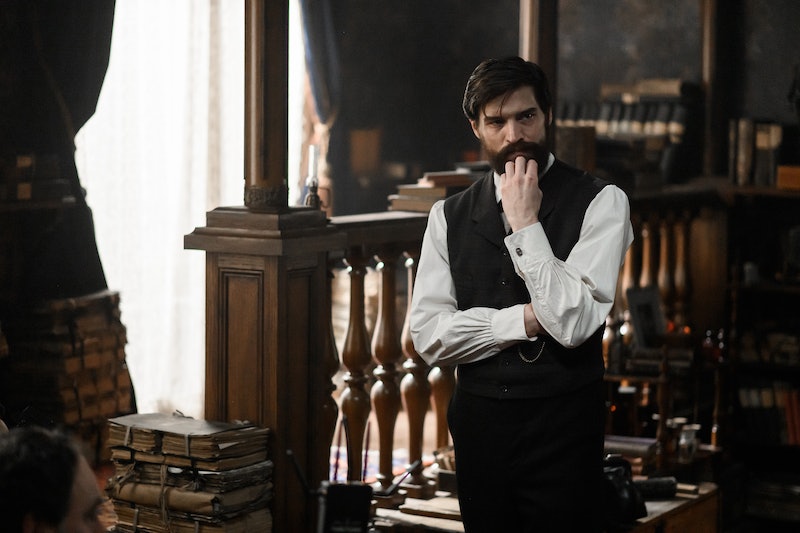 Netflix's new show Freud should be classified as historical fiction. While the main character of Sigmund Freud is real, the storyline is not true. Sorry for everyone who was secretly hoping that the Father of Psychoanalysis also hunted down murderers, but it didn't happen.

The German-language series imagines how a young Freud could have used his budding psychoanalysis skills to solve crimes, but only the character itself is rooted in fact. The series takes place in 1880s Vienna, which is where Freud lived for much of his life. He attended the University of Vienna in 1873 to study medicine and went on to work at the Vienna General Hospital. The show explores some of Freud's early work in the psychoanalysis sphere, like his brief experimentations with hypnosis.

To prepare to play Freud in the Netflix show, actor Robert Finster told an Austrian outlet that he let himself be hypnotized during his research phase. He also said that he looked into Freud's biggest theories. "Freud is a bottomless pit. I could have researched for years. Of course there wasn't that much time, so I had to limit myself," he said. He specified that he focused on Freud's younger years since he's playing the early version of the historic figure.

One other aspect of the show that appears based on real life is the character of Fleur Salomé, a medium who teams up with Freud to help solve the cases. She seems loosely based on Lou Andreas-Salomé, Freud's student, friend, and confidant, according to The New York Review of Books. The outlet reported that the real Salome´, though not a medium, "could immediately see connections which others could not yet see." And Freud once said in a letter that Salomé was able to understand people better than they could themselves.

In the Netflix series, there's a lot of romantic tension between Freud and the character of Fleur Salomé. The New York Times reported that there have been rumors that the real Freud and Lou Andreas-Salomé may have had feelings for each other, but that hasn't been proven. But seeing as the series takes place in the 1880s, and the NYT reported that Freud and Lou Andreas-Salomé didn't meet until 1911, fans shouldn't put too much stock into what the show presents about their alleged romance, since it does lend itself well to a historical fiction narrative.

Director by Marvin Kren told Variety that when making the series, he didn't want it to "look too historical." He said, "We want to appeal to young and modern audiences." To do that, the series had "modern and provocative elements mixed in with the historical." The show was also challenged by the fact that Freud was "notoriously controlling with how his own story and biography were presented," as Kren said, so they didn't have much information about his personal life — although the excessive cocaine use is reportedly true to Freud's real personality.

Everyone made do with what was available about Freud, but then the show also used some creative liberties to present a thrilling story to audiences about a crime solving, budding psychoanalyst. It's not even the first time Freud's been imagined as such, according to The Guardian. A previous show called Freud: The Secret Casebook was going to have Freud cracking unsolved cases, but the project stalled in development. There was also a novel called The Interpretation of Murder, which had Freud solving a New York murder in 1909. According to The Guardian, Freud was also reportedly a big reader of detective novels, including those about Sherlock Holmes. So while he didn't solve crimes in his real life, maybe he'd be flattered by a TV show imagining that he did.

More like this
Everything To Know About The 'Daisy Jones & The Six' TV Series
By Maxine Harrison and Brad Witter
Here’s What Happens To Bill & Frank In 'The Last Of Us' Video Game
By Brad Witter
You Might Want To Rewatch This Key 'On My Block' Scene To Understand 'Freeridge'
By Grace Wehniainen
The 'Freeridge' Cast Shared Their Hopes For A Potential Season 2
By Grace Wehniainen
Get Even More From Bustle — Sign Up For The Newsletter
From hair trends to relationship advice, our daily newsletter has everything you need to sound like a person who’s on TikTok, even if you aren’t.