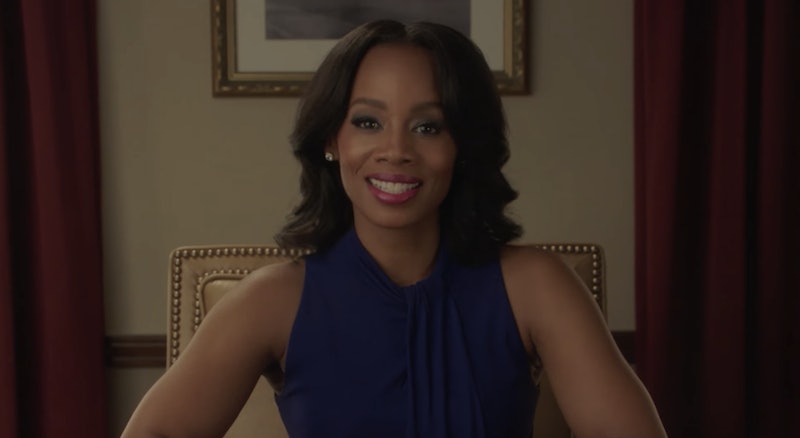 When beloved TV characters go off to college, they often attend institutions of higher education that exist in real life. Famous Yalie Rory Gilmore, the Gossip Girl crew's days at Columbia University, and the Sister, Sister twins attending the University of Michigan immediately come to mind for me. So I have to wonder if The Quad's Georgia A&M is a real college as well.

If you Google Georgia A&M and click on the first search result that pops up, it certainly looks like the website of an academic institution. You've got the school's logo and motto ("Pride, Tradition, Excellence") up top, pages that lead to helpful resources for students and applicants alike, such as a list of the school's majors and a campus calendar, and detailed bios for each of the faculty members.

However, if you stay on Georgia A&M's homepage for just a little longer, a video will autoplay showing actress Anika Noni Rose introducing herself as Dr. Eva Fletcher, the president of Georgia A&M. If you click around the website even further, navigating to the Admissions page will not allow you to submit an application, but will take you to The Quad's page on BET's website. What's more, the Gam Fam section of Georgia A&M's website will take you to the university's Twitter profile that says the college is a "fictional institution" featured in The Quad.

So there you have it. Georgia A&M, which is a HBCU (Historically Black College or University) in The Quad, is not a real university. However, it's possible that Rob Hardy, one of the executive producers of The Quad who came up with the concept on which the series is based, drew some inspiration from his own alma mater. Hardy attended Florida A&M University, Yahoo TV reports, and that is a real-life HBCU.

Rose is also an alumna of Florida A&M, although she said that experience didn't really help her with the role of Dr. Fletcher. “She’s from Connecticut, so she doesn’t have any experience with the South or with HBCUs. She comes out of [the] Ivy League," Rose told Yahoo TV.

Whether intentional or not, Georgia A&M does share some similarities with Florida A&M. The real-life university also had a female president, the first in its history, when Elmira Mangum took the post in 2014, according to Jacksonville.com, but the school's Board of Trustees voted for her to step down in September 2016. Also like Georgia A&M, Florida A&M has a rigorous football program that's part of the NCAA's Division I.

But the most striking similarity between Georgia A&M and Florida A&M is its marching band. In The Quad, the pride of Georgia A&M is its band, the Marching Mountain Cats. This is a competitive and prestigious ensemble that looks like it's going to come under fire after some hazing makes one member end up in the hospital and the director of the band doesn't do anything to stop it.

Florida A&M is also famous for its Marching 100 band. It has performed at the inaugurations for Presidents Bill Clinton and Barack Obama, as well as a few Super Bowls.

However, the Marching 100 also found itself in embroiled in controversy when drum major Robert Champion died after being hazed by the band aboard a parked bus following a football game in 2011, according to CBS News. Fifteen members of the band at the time received criminal charges. Most of those charged were later sentenced to probation and community service of varying lengths. However, a few received prison sentences, the harshest of which was given to Dante Martin, who received 77 months after being found guilty of manslaughter and three counts of hazing, the Orlando Sentinel reported. The Marching 100 was suspended, Florida A&M's president James H. Ammons resigned in 2012 amid the scandal, and the director of the band, Julian White, retired in 2012 after returning to the role following a brief suspension.

But since The Quad is a TV show, we should expect it to take some artistic license and up the drama when it comes to how it portrays HBCU life on screen.