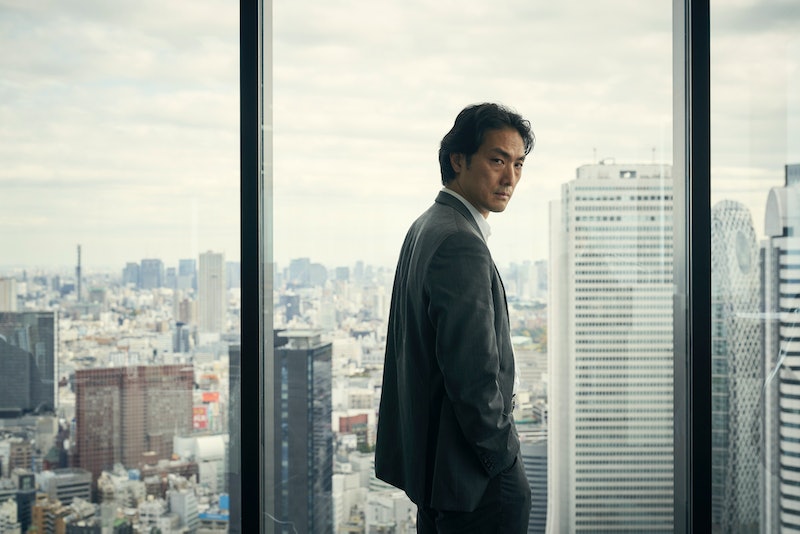 BBC Two's brand new thriller Giri/Haji follows the journey of two estranged brothers as they navigate violence, chaos, organised crime, and family ties on the streets of Tokyo and London. But, with such a wild storyline, what I want to know is: is Giri/Haji based on a true story?

Well, I'll be real with you guys and say that, no, the story isn't based on a true story. However, it was inspired by something real. As the show's scriptwriter Joe Barton explained to the BBC, Giri/Haji came about from "a brief conversation" he had "about seven years ago with [his] girlfriend at the time." He continuned:

"She'd just started studying for a Masters in Forensic Crime Science at UCL and was telling me about her first day. Her fellow students were mostly recent graduates like her, except for one — a middle aged Japanese man, sat at the back of the lecture theatre on his own, diligently taking notes and looking out of place amongst his other, younger, classmates."

The gentleman in question turned out to be taking a sabbatical from his regular life working as a policeman in Japan. He was there to learn about the world-class forensic methods used by the Met Police, Barton explained, before saying: "Something about the image of that man sat by himself in a strange room in a strange country, many miles from home, stuck with me."

In light of this, Giri/Haji is a combination of romance, misfits, and broken people. All lost in an enormous metropolis trying to put the pieces of their lives back together.

According to the BBC website, Giri/Haji translates to Duty/Shame and is the story of two brothers. Kenzo and Yuto were once very close but are now estranged. Kenzo, who works as a detective in Tokyo, finds his personal and professional life intertwined when his superiors send him on an international manhunt. For his own brother. It is believed that Yuto murdered a member of the infamous Japanese crime syndicate the Yakuza, which, as the BBC explains, is seen as "a declaration of war that threatens to tear Tokyo apart."

The TV show is set in both Tokyo and London. Speaking to the BBC, Executive Producer Jane Featherstone explained that, despite Giri/Haji showcasing the two different cultures of the cities, the show is actually about what connects us as opposed to what separates. She said:

"We don't overplay the culture clash. That's not really what it's about. It’s about human beings who actually share a lot in common. It is a culture blend."

More like this
ITV's 'Maternal' Was Inspired By A Very Simple – & Unanswerable – Question
By Maxine Harrison
This First Look At 'The Gold' Shows Jack Lowden In A Whole New Light
By El Hunt and Sam Ramsden
A New Netflix Doc Will Explore The Unsolved Murder Of Jill Dando
By Sam Ramsden
9 Time Catherine Cawood Was An Absolute Badass In Happy Valley
By Sophie McEvoy
Get The Very Best Of Bustle/UK
Sign up for Bustle UK's twice-weekly newsletter, featuring the latest must-watch TV, moving personal stories, and expert advice on the hottest viral buys.