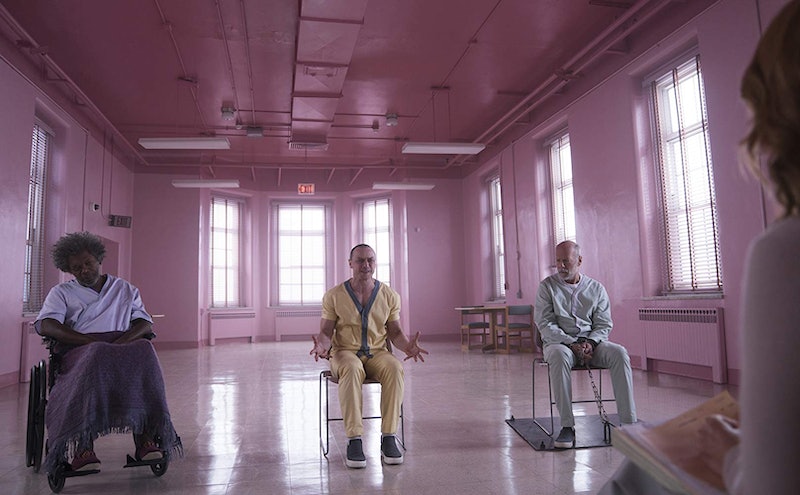 M. Night Shyamalan is completing his Unbreakable trilogy with Glass, out Jan. 18. The final installment brings back superhero David Dunn (Bruce Willis) and villains Elijah (Samuel L. Jackson), who now uses the alias Mr. Glass, and Split’s Kevin (James McAvoy). In this one, David is trying to capture The Beast, one of Kevin’s many personalities. But he also has to deal with Dr. Ellie Staple (Sarah Paulson), a psychiatrist who specializes in people who believe they are superheroes, treating the three men and bringing them together. Typically, superhero movies are based on existing comic books, so is Glass based on a comic book series?

As reported by Gizmodo, the Unbreakable trilogy isn’t based on a real comic. Instead, Shyamalan created his own cinematic comic book universe, introducing a superhero who doesn’t fit the mold of a traditional one.

In an interview with Den of Geek, Shyamalan discussed merging comic book movies with thrillers in a way that feels unique, falling in line with his other work. “The goal was a comic book thriller. That was the goal — that it should be like those two genetically fused,” explained the director. “What does a thriller feel like? It’s a psychological thriller, so it always has that body of movement to it, but it has the colors of a comic book, and it has those moments in its allusions to those feelings of empowerment and of becoming who you are — origin stuff.”

And just like his 2000 movie Unbreakable is far from the typical superhero flick, being character-driven, rather than relying on CGI and action-packed fight sequences, Glass also barely resembles any movies in the MCU or DCEU franchises. Superhero movies became their own genre after Unbreakable came out, and Shyamalan acknowledges a slight influence in how he tackled the final sequel. When asked by Den of Geek if Marvel exists within the world of Unbreakable, the director hinted at the new movie having some meta elements. “I don’t want to spoil anything for you, but there’s a lot of references to the movie that it knows you think it’s going to be. It’s very aware of that, and it will tell you that, and then it becomes this other thing,” explained the director.

He elaborated further to the British publication when asked about how different it is to culminate the trilogy with Glass now rather than shortly after Unbreakable. “I wouldn’t have done this meta stuff [if Glass was filmed right after Unbreakable]. And I think it would have been more straightforward,” said Shyamalan.

But in an interview with Digital Spy, Shyamalan said the upcoming film is still very much grounded in reality, despite its superhero narrative. “Each of the movies, we take a little bit of privilege, but not so much that anybody's flying or there's lasers or fire coming out of your hand. Can you bend an iron pipe? I'm not sure, I don't know. I think I've seen a weightlifter do that, so it's right on the edge of those things," he said.

The Unbreakable trilogy feels extremely different from any other superhero movie out there, making Glass one of the most anticipated flicks of 2019.