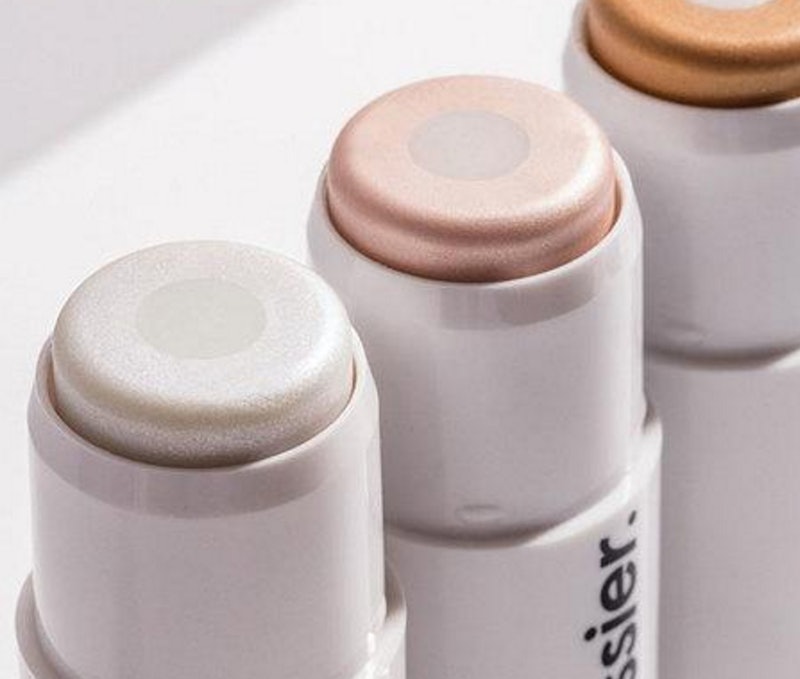 Everyone who's been rationing their Glossier Moonstone highlighter since the holiday season, breathe easy. The dewy duochrome introduced in the brand's Black Tie set is back, and this time you don't have to go all in on a $75 dollar set to get your hands on it. So great news if you held out during the holidays, and even better if it's already your highlighter OTP, because the brand just announced the glow stick's triumphant return. Immediate next question — Is Moonstone permanent? We've finally got an answer.

According to brand's Instagram Story, the third Haloscape shade is back for good as part of Glossier's permanent line, available for $22. Probably bittersweet news for people who splurged on the set for the highlighter alone, but clearly it's a hit. Described by the brand as the first "dew effect highlighter" for its moisturizing oil core, Haloscope now comes in three shades — opal white Moonstone, pearly light nude Quartz, and golden bronze Topaz.

Of course, natural progression is to wonder if this means Glossier's Black Tie gloss is coming back, too. A return isn't officially confirmed, but the brand responded to Instagram commenters who asked with "It's possible—stay tuned ✨".

Until there's more on that front, I'll be staring at Moonstone's sheen.

Especially enticing with free shipping on the Glossier for the next 24 hours (!!).

That "we're all snowflakes" label on their boxes? Moonstone's icy shine takes it literally, and it's frostbite redefining the word.

More like this
26 Easy Halloween Makeup Looks For 2022 That Require Zero Skill
By Olivia Rose Ferreiro
Jecca Blac’s New Brow Drop Was Inspired By Your Fave Drag Queens
By Justine Knight
How To Get Your Hands On The Pat McGrath X Supreme Nail Kit
By Justine Knight
Does Valentino’s Twin Liner Live Up To The TikTok Hype?
By Olivia Rose Ferreiro
Get Even More From Bustle — Sign Up For The Newsletter