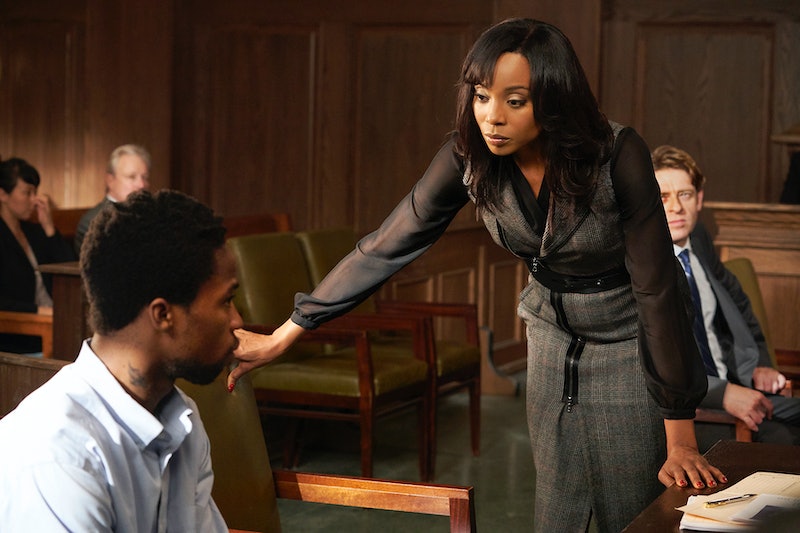 BET's new legal drama In Contempt follows attorney Gwen Sullivan as she attempts to search for justice in the courtroom while balancing the stress of everyday life. The series, premiering on April 10 on BET, focuses on a group of public defenders who are trying their best to do their job and give defendants who can't afford to hire a lawyer fair representation, while dealing with competitive prosecutors and limited resources. In Contempt's Gwen Sullivan is not a real person, but she is portraying the very real difficulties of having to serve as a public defender.

In Contempt was created by Terri Kopp, who also serves as showrunner on the series. Her own personal experience is actually fueling the series and the character of Gwen Sullivan. Per Deadline, In Contempt is pulling from Kopp's 3.5 years working with Manhattan's Legal Aid Society to tell the story of the some of New York's hardest working public defenders. Kopp's description of public defenders shows that the reality of life as a public defender is far from the glamorous life of many television lawyers, telling crowds at a Television Critics' Association panel, reported by Eurweb, "People have this idea that criminals have special rights, and they get all the breaks, and it’s actually the opposite. People accused of crimes are fighting an uphill battle ... the judges are usually ruling against you. The prosecutors have more time, more money. Public defenders have huge caseloads. You have 125 misdemeanors and 20 indicted felonies."

While Terri Kopp is using her experience to help write the role of Gwen, the challenge of playing the character fell to actress Erica Ash. When bringing the role of Gwen from the page and into a performance, Ash did not have Kopp's legal background to pull from, and so she ended up seeking out her own assistance in learning how Gwen Sullivan would get her job done.

Per the Herald Courier, Ash was immediately aware that playing Gwen Sullivan would take a great deal of effort. Ash "knew [Gwen] was an amazing character, but she is so layered and so complex." In preparation, Ash spent time with and ended up modeling her performance after Atlanta public defender Zanele Ngubeni, which she told the Herald Courier inspired her to bring a "passion" to her performance as Gwen. Ngubeni is passionate about not just public defense, but also about improving the entire infrastructure for how public defenders are trained and treated.

Ngubeni has spoken out frequently in favor of Gideon's Promise, a non-profit organization with a mission to build "a movement of public defenders who provide equal justice for marginalized communities."

While speaking about Gideon's Promise to NobelSol, Ngubeni said, "You can’t imagine how much sacrifice that [public servants] have had to make, especially for something that is so unpopular." The fact that Ash studied under Ngubeni while researching the role of Gwen Sullivan provides an insightful look into the way that Gwen, and the show, approach the job of being a public defender.

Despite the difficulties of being a public defender, as reported by Eurweb, Kopp is enthusiastic about showcasing the noble career on television. Recalling her own time as a public defender, Kopp said, "My experience was that we were really overworked, but also really dedicated, really committed to the work. It’s also a pretty competitive job. It’s a hard job to get."