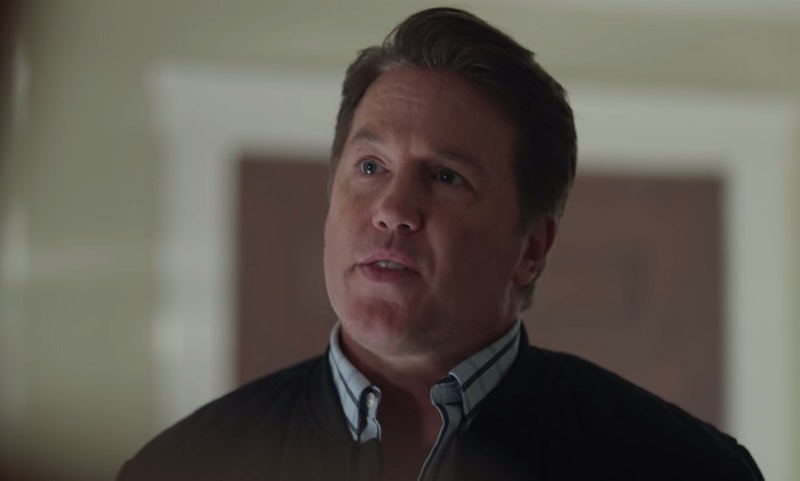 Screenshot via The CW
By Rebecca Patton
April 25, 2019

Spoilers ahead for Riverdale Season 3, Episode 19, "Fear the Reaper." It's a universal truth that when a character on Riverdale "dies" offscreen, they're almost definitely still alive. Take Penny Peabody, who pops back up in the April 24 episode, or Mad Dog, who supposedly died in juvie and is now present and accounted for. So when Veronica tells Betty that Hal Cooper died on Riverdale, there's reason to be skeptical.

Everyone knows that Betty's dad is no good — he is the Black Hood, after all, and has been in prison since that shocking Season 2 reveal. But since his daughter started visiting him in jail, they've built up a rapport. It's an incredibly stupid thing for Betty to do — confiding in her serial killer father — but she doesn't have much of a choice, since her mom is so thoroughly embedded in the Farm at this point that chaining her to a bed has no effect on her allegiances (seriously, did Betty really think that would work?).

But despite repeatedly swearing she's never going to talk to her dad again, Betty keeps donning that visitor's pass and telling Hal everything Alice is doing. The latest news is that Edgar Evernever and Alice are getting married and plan to adopt Polly's twins, Juniper and Dagwood. Hal gets extremely agitated when he hears this news, telling Betty, "No, that can't happen! Juniper and Dagwood must be protected!"

But before all this happened, Mr. Cooper requested to be moved to Hiram's new private prison, which Betty makes good on this week. She asks Hiram Lodge for a favor, saying, "My dad is incarcerated two hours away in a windowless cell. It's a horrible place, and he heard about your facility and how some of the cells even have views of Sweetwater River."

So it feels pretty suspicious when Veronica breaks the news to Betty that father dearest was killed while being transferred to said private prison. Furthermore, we never see any of this happen, which in Riverdale-speak, likely means Hal is now on the run. And that can't be good news for anyone, Betty included. He seemed supremely pissed when he found out about Juniper and Dagwood, so it wouldn't be surprising if he headed straight for the Farm to make Edgar Evernever his next victim.

This also leaves us wondering: What exactly happened in transit? While Betty's right that Hal's prison is an eyesore, is that really the only reason he wanted to be moved? It wouldn't be outside the realm of possibility that Hiram and Hal are in cahoots and that this whole thing was organized so that he'd be able to escape. That said, this could all be the Black Hood's doing — arranging someone to attack the transit vehicle, staging his death, and allowing him to get away.

The third possibility is that Mr. Cooper really did just want a better cell, and someone else kidnapped him while he was being moved. And the fourth, and perhaps craziest possibility of all, is that Hal really is dead. But we've been burned so many times before with these wild Riverdale cliffhangers, only for the characters to show up safe and sound minutes into the subsequent episode. So until we see Hal physically die, trust no one.

For now, Hal's fate is up in the air. But if he really did get free, then both Alice and Edgar better watch their backs, because hell hath no fury like a serial killer scorned.