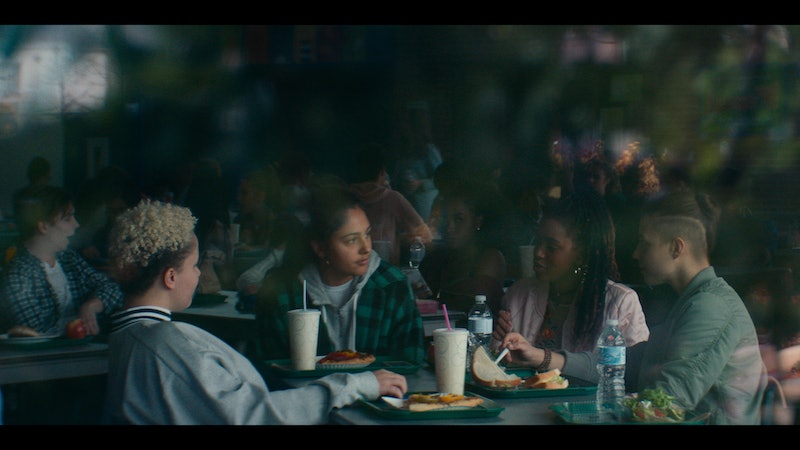 Premiering on July 27, the sexual assault drama Share comes to HBO with a pedigree. It's an expansion of writer/director Pippa Bianco's short film of the same name, for which she won the Cinéfondation award at Cannes back in 2015, and has already been screened at Sundance (where it won accolades for screenwriting and acting) and the French festival where it got its auspicious start. Share isn't a true story in the sense that it's about one real person's direct experience with sexual assault, but Bianco did interview survivors for both the short and the feature version of high schooler Mandy's (Rhianne Barreto) ordeal, wherein she learns about her own abuse via a cell phone video that starts making its way around her school the morning after a party and has to decide how to move forward.

"In the men and women I spoke to, the one thing [that] was consistent — whether they chose to come forward or chose to remain anonymous — was guilt and shame about the life not lived and wondering if their life would have been easier or less painful if they’d made the opposite choice," Bianco says, sitting next to her lead actor in a conference room in HBO's New York City offices.

Barreto's Mandy is a basketball player and a fairly popular kid, loved by her family and fielding romantic interest from two boys in her class. But her world is upended when she sees a video of herself in a sexual situation she doesn't remember and couldn't consent to. It alienates her from everyone in her life, no matter how supportive they try to be.

"For the majority of the film I’m alone, or with my parents... and that’s pretty alone," Barreto says.

The circumstances of the shoot helped the actor find her way into Mandy's headspace — not only was she "a 19-year-old who had to move to Toronto by herself to work 14-hour days," as Bianco puts it, but she also endured humiliation and the whole production was dealt a setback, thanks to Donald Trump's Muslim travel ban. Despite being born in the U.K., Barreto was denied a work visa for the U.S., where Share was initially supposed to be filmed. The production was moved to Canada to accommodate her, though the actor had feared at first that she'd be recast and that all the preparation she'd done "would be for nothing."

"It became immediately easier after that experience to connect to a lack of control and intensity about the law," the actor says, "[that] there’s nothing on this world that is above government. That was a really bizarre thing to come across. If I’m not allowed into a country, that’s it. You can’t appeal a higher power. God isn’t going to intervene."

There was a sense of helplessness, but anger too. When Barreto talks about burying some of the emotions drudged up by the issue, she could be speaking for her character.

"I have probably forgotten a lot of the pain that I went through," she says, "just because I have to exist as a human being, and if I occupy that space, it just hurts too much."

Share doesn't focus on Mandy's assault, but instead examines the aftermath of her discovery and how the footage invites her family, friends, and acquaintances into her trauma, making it impossible to her to ignore it, even if she wants to. Through the film, Bianco wasn't endeavoring to tell a universal story about survivors, because there isn't one.

"You want to think, 'Oh, if this happened to me, I’d be cool. I’d have a plan. I’d know what to do,'" Bianco says. "But with that comes a lot of judgment for people who are really living it. And you don’t ultimately know what you’d do in any situation until it’s happening to you. So I really wanted to remove some shame from the equation and create some empathy for choices that are deeply personal and maybe unpopular, because I think that that empowers everybody." Zeroing in on Mandy, her exact circumstances, and the choice she makes for herself, in the filmmaker mind, creates "greater space ... for everybody to just exist."

As Bianco says, the film is "very much in service of [Mandy's] point of view," but that character wasn't even the seed of the project. Bianco told Deadline that she was first inspired to tell this story because she learned of two male friends "who’d been involved in something sort of similar as perpetrators." In that way, Share is also something of an investigation into what would lead someone to exploit another person in this way. The filmmaker doesn't have an easy answer for that, even after making two different versions of Share.

"It’s a really complicated mix of factors [that make up] why people do this to others," she says, after taking a careful pause. "And if I had to pick one I would say it’s because it’s really easy, no matter what generation you’re a part of, to not see anyone in your life as as fully human as you are. It really takes a lot of active work to make the people around you human beings."

Share has empathy for the people who surround Mandy — even those responsible for her pain. Her small section of the world feels grounded and lived in, a feeling enhanced by the film's diverse cast. Barreto recalls looking at a wall of headshots in a production office before filming began and thinking, "It’s not just me who has a white dad and a brown mum." Now 21, the actor also says that she related to the friendships Mandy shares with the other young women on her basketball team, "chatting about food most of the time," and the different relationships she has to the boys who pursue her.

While many sexual assault storylines in film and television find drama in survivors not being believed — certainly a valid and realistic route — Bianco didn't want to put Mandy in that position. Because in her research, she found that even those survivors who had support systems and people who were willing to fight for them endured a great deal of hardship.

Those are the questions that Share asks, but in the end, the choice of what to do next is left in the hands of the young woman at the center of the story — right where it belongs.

More like this
Twitter Is Identifying With Sally Field & Jane Fonda’s Friendship In New Viral Video
By Jake Viswanath
Owen Thiele Asked Sundance Attendees About Films That Don’t Exist
By Grace Wehniainen
Jennifer Coolidge Hunted For Jewels & Lashes In J.Lo’s Hotel Room
By Jake Viswanath
Keke Palmer Shares The Sex Of Her & Darius Jackson's Baby
By Jake Viswanath
Get Even More From Bustle — Sign Up For The Newsletter
From hair trends to relationship advice, our daily newsletter has everything you need to sound like a person who’s on TikTok, even if you aren’t.